I Want Your Everything As Long As It's Free 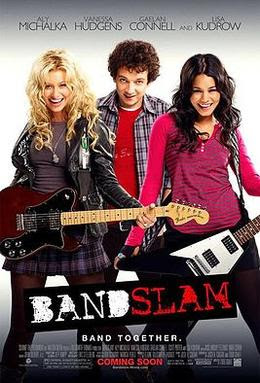 Bandslam (Graff, 2009)
With The Secret of Kells I watched a stunningly beautiful and utterly captivating re-telling regarding the creation of a famed Irish manuscript. With Un Prophete I was sucked in to a tense prison drama ripe with thematic depth and engrossing characters. Likewise, Shutter Island and Alice in Wonderland are two insanely enjoyable entries from what I consider to be two of my favorite director's best fictional films in impressive filmographies. Hell, I even finally had a chance to watch the stunning 2001: A Space Odyssey, likely cementing the third of three Kubrick films I have seen that will appear on my Top 97, and the mildly amusing In the Mood for Love from Wong Kar Wai. And of all these films, during this far too long hiatus, is it any surprise the that film that inspired me to log back in and share my thoughts would be Bandslam?

Let us make one thing abundantly clear before going much farther in to this reflection: Bandslam is not a complex film, it does not take twists or turns, you know where this film is going right from the cliche voice over beginning to the puzzling cameo at the end. So what, you may ask, has this film done to make me want to start writing again? One scene, that's it, one magical, beautiful, reserved, fascinating, charming, wonderful scene. One scene that, after I get the boring majority of the film out of the way first, I will devote a full paragraph to later in the reflection.

Basically what we have with Bandslam is the love child of Adventureland and 17 Again without all the complexity or hilarity of the Greg Motolla film or all the charm and charisma of any non-High School Musical film headed by Zac Efron. Speaking of High School Musical, series alumni Vanessa Hudgens has a prominent role in this film, and for the most part she turns in a solid performance. Actually, performances are solid across the board, which I suppose is part of the problem. Nothing really stands out. Even Lisa Kudrow, who had a decent enough turn in Hotel for Dogs, does nothing of merit in a role that she probably could have taken a couple of liberties with here and there. Much like a majority of the humor, the actors are all so bland.

But what is not bland, at least not as much as most other aspects of the film, is the direction. I am always puzzled when films like this, mainstream affairs that tend to bomb at the box office, consistently surprise me on a technical level. In recent years many more directors have been making wonderful use of the wide shot, one of my favorite ways to frame a scene, and the use of symmetry, or at the very least the positioning of actors in a frame, is generally used to great success. A shot of Hudgens' Sa5m (the 5 is silent) and lead actor Gaelan Connell's Will Burton sitting on an overlook is absolutely stunning, quiet, and reserved. All of these aspects add to selling the romance between the two, but they sell it not in the bombastic kiss me in the rain manner that so many mainstream romances impress upon the viewer; instead it's calm, it's quiet, it's beautiful, and it's a bit awkward, and a bit natural. And this tone, when present in the film, is mind blowing.

Unfortunately, this tone is not in the film very often. The main premise of Bandslam is that a band from across the country wins a big battle and gets a record deal. And while the film is quick to tout its rock and roll knowledge and name drop The Velvet Underground, Led Zeppelin, The Who, and countless other classic acts with little regards for the target demographic, the desire to cater to a PG crowd and the notions that casting Vanessa Hudgens forces the audience to bring to a film result in such figures being placed alongside the modern notions of the genre has progressed in the modern era. For so many kids who claim to be inspired by Bowie and Lou Reed it certainly does not come through in the type of music they play. Not to say the music is bad, just that the maths don't really add up.

But who cares? You know why? Because this film could be 18 hours of trite, humorless, monotonous bullshit and still get a pass from me. Remember when I talked about tone and mood? Well here come some spoilers as I attempt to accurately convey my reaction to that majestic occurrence that happens a little more than halfway through the film. We are in class, presenting on the Who Is Your Partner (my title not the film's) Project. Last weekend Will totally blew off his first official date with Sa5m, unintentionally, to scope out the competition from one of the rival bands. So a vindictive same, in a stunningly effective reserved turn from Hudgens, is armed with a mirror as she, word by word, tears Will apart. She is vicious, you know Will deserves it and so does she, as she works in a wonderful extended metaphor about how he will casually reflect upon anyone exactly what they want to hear, obliging anyone except his nonexistent self. As my mouth is agape at the intensity of what is transpiring the teacher injects some throw away comedy about how it is mean. And I feel bad, bad for Sa5m, and bad for Will, who I had completely bought in to by that point in the film. And then it's his turn. He takes a DVD and places it in the projector. I assume it's of Sa5m singing as a child, a DVD shown to Will a few scenes early that Sa5m told her mom never to show anyone. But it's not. It's a Will Burton film featuring the director and a cardboard cutout of Sa5m sitting on a blanket, drinking Coca-Cola from Twizlers, one can, two straws. And the music plays, and the montage within the film happens. We need no words, it's teenage infatuation, it's fleeting feelings and an eternal magic that lies dormant, or perhaps awakened, in myself, likely in any adult watching the film. And the juxtaposition. I do not do my scene, nor my reaction, justice, but it's one of the most emotional reactions I've had to a film in quite some time. Why can't more films do this?

What more can I say? Bandslam is generic, it is bland, it is puzzling, contradictory, and all types of other adjectives that make it not even half as entertaining as 17 Again and barely a fraction as profound as Adventureland. But it has one of the most spectacular scenes in any film I have ever seen, and God damn is that impressive.

And with that, at least for now, I am finally finished with 2009, I think. What a year. I need to do a complete re-cap in the near future.

Also I am on the old Twitter thing so I guess you can follow me at twitter.com/FLYmeatwad.
Posted by Rich Thorne at 6:25 PM No comments: