All Roads Lead Toward The Same Blocked Intersection 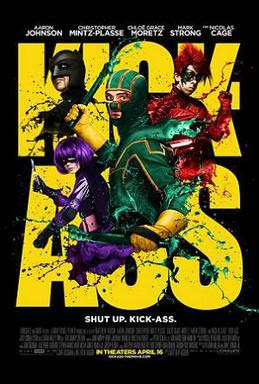 Kick-Ass (Vaughn, 2010)
Christopher Nolan. David Fincher. Quentin Tarantino. Zach Snyder. And now, I suppose, Matthew Vaughn is a name to add to the list of directors who can be charged of crafting films that ooze style while skimping on the substance. While I would debate the grounds of many of these claims, as most of the directors have crafted at least one film that would serve as an effective counter point, whether found in the strong subtext present in Fincher's Fight Club, the sprawling narrative in Snyder's take on Watchmen, and just about all of Tarantino's library, (though I suppose that does leave Nolan out in the cold), Vaughn's latest effort (following up his 2007 sophomore film Stardust) may justify such a claim being leveled at the filmmaker. Though I haven't seen either of his two previous pictures, meaning I shall concentrate mostly on my reaction to the man's latest creation, Kick-Ass, an adaptation of Mark Millar's series of graphic novels by the same name, Vaughn has created an interestingly diverse set of films. But sometimes I need more than interesting to keep me going, or maybe I don't, or maybe Vaughn just doesn't want me to know what I want at all.

If the director does, in fact, want to keep me feeling off kilter throughout the entire film he has successfully accomplished his initial mission because, for all intents and purposes, Kick-Ass is a messy and inconsistent film in just about every regard. The score ranges from overbearing to needlessly quiet, yet this pairs with such a delightfully scattershot soundtrack that features a hodgepodge of styles and sounds with each cue seeming almost too perfect for the current scene, practically mirroring the construction of the film as a whole. The three act structure is followed incredibly strictly, so much so that, unlike just about every other successful film based on a graphic novel, no twists or turns at all occur in the narrative. It remains entertaining, but devolves incredibly quickly into predictability, which also mimics the camera tricks that Vaughn employs throughout the film where, during each and every tense scene, we are expected to wait until the a character is placed in a deadly situation before, at the very last second, the tables turn. For a film that is so intent on taking risks with its content the tale is told in a mighty generic manner, and I know I don't go for generic. Even stylized generic, so despite using all those wonderful long shots and top down angles, and starting off by using comic book cues such as text boxes reading "Meanwhile" and other descriptors before eventually abandoning that idea completely, I don't know if the minimal technical flourishes are enough to keep the film afloat by my traditional standards.

But this is an actor's film damn it! Or maybe not. Sure Nicolas Cage follows up one of 2009's best performances in The Bad Lieutenant: Port of Call New Orleans with a smash up performance that succeeds where the film tends to stumble, blending comedy seamlessly with action. And even Chloe Moretz does a decent job of that as well, but I got the feeling while watching her that the character, the disturbingly ruthless preteen Hit-Girl who cares just as much about dropping the C-Nuke as she cares about slicing apart one of the many nameless goons she confronts in the film, is more interesting than her performance. I guess between this and her annoying turn in (500) Days of Summer that means I have even more reason to be concerned about the upcoming remake of Let the Right One In. Anyhow, what seemed so odd was not the actors in the film, but the fact that none of the characters ever seemed fully developed, and nearly all the secondary characters were reduced to caricatures nearly by default. Thankfully the smaller lead roles were anchored by two of the best performances in the film. I do not know if the public as a whole is still unable to separate Christopher Mintz-Plasse from his McLovin character, but I have little problem doing so, and he brings such a presence to the screen each time he is on camera that believing him in the role of Red Mist is a simple task. And then there is Clark 'Bar' Duke as one of Kick-Ass's best friends, allowing for him to generate the funniest moments in the film. Yeah he's doing a similar shtick to what he did in Clark and Michael, but he pulls off that undeservedly cocky, overly hip, self aware comedy that it doesn't matter. Speaking of Michael Cera this is the part where I start to bash lead actor Aaron Johnson. Johnson is supposed to be playing this socially outcast high school student who doesn't communicate well with the opposite sex, yet we still need to be able to identify with him and root for him for the film to work. However, what we get are a few fleeting glimpses of the types of characters that Cera and Eisenberg have perfected with none of the chemistry that Cera could bring to those Clark Duke and Mintz-Plasse scenes. Hell, even Anton Yelchin could have worked better than the emotional sinkhole that is Aaron Johnson.

But now I'll take a page out of Vaughn's book and switch this shit up at the drop of a dime without any warning or sense.

Up until this point I feel as if I have been deceptively negative, perhaps betraying just how much I enjoyed this film. It seems ever since Avatar that action scenes are becoming much more tolerable as traditional editing is used to keep pace while directors intelligently color code each side to make these fast paced sequences simple to follow. And boy damn are the action scenes on display here a rush and a half, they are, for lack of a better term, the definition of bad ass. In fact, some may say they kick ass (how can I pass something like that up?). But even the action scenes are off kilter as Vaughn crafts the world in such a way that the viewer is constantly questioning the purpose of this gratuitous violence. Early on in the film he establishes these make shift superheroes as incredibly human and capable of dying, yet like a lamb to the slaughter this realism is sacrificed without explanation when it would enhance the cool factor. And don't get me wrong, it does, and maybe the desensitization that goes along with the violence is part of the satire, but for that to be the case it would make more sense to not include those scenes that show the gruesomeness of violence, and, really, watching a young girl get punched in the face or gun down a ton of different guys is going to get a reaction no matter how desensitized we may be.

And with that I ask, among the separate realms of action and comedy, in a film that seems to go out of its way to not establish a consistent tone, for a movie that succeeds so well at entertaining but is so stiff and calculated that outside of the shock any traces of heart are severely minimalized, does Kick-Ass have a point? Perhaps not, but maybe that's okay? At one point the film seems ready to begin exploring the idea of escapism and the futility of this exercise, and then all the pieces are set to look into the creation of celebrity in relation to the physical toll this takes on individuals, but none of these ideas are followed through in any substantial manner. But in not probing these ideas am I being asked to simply watch, to be a hog in the mud and revel in the ultra-violence while not looking any deeper into this film? I cannot do that. The obvious point of comparison for this film, I assume, is Watchmen, but while that film suffered from having too much going on outside of the action sequences Kick-Ass is concerned with accomplishing too little outside of its action. Yes, it appears to be a love letter to the comic book lover. Yes the dialogue is fun, and the film is a blast, but it is also just so problematic and personally distressful. I take no offense to the content, in fact I wish that more films would take the risks that Kick-Ass takes, but with those risks there needs to be a purpose outside of simple entertainment.

This reflection has been more rambling than I had intended, but I firmly believe that, as a writer, my obligation is to best convey my experience and response to a piece of culture, and without getting into spoilers that add a few more specifics to my reaction I think that is what I have done here. Films like Kick-Ass only serve to further negate the meaning of rating systems. At the end what I have learned is that the film is fun, it is stylish, and despite all its faults key members of the cast increase the enjoyment to be had. But those inconsistencies, the lack of purpose, the absence of themes outside of the most basic type, I should be ripping this film apart, not considering seeing it again on DVD. Either way, a film like this one does, in retrospect, make me appreciate something like Speed Racer all the more, a stylized tent pole film (though the origins of Vaughn's film hardly qualify as traditional studio fare as it effectively straddles the line between perceptions of independent and mainstream cinema) that blends the humor with the action, that gives purpose to the events, that may not be perfect but provides all the fun of an event movie with the cerebral simulation of more 'serious' films. Or even a Sin City that uses hyper violence and a unique visual style that weaves seamlessly with a consistent and intriguing narrative. I'm going in circles now. Kick-Ass is fantastic and fun. Kick-Ass is terrible and pointless. Kick-Ass is a thrill ride that challenges conventions while being cliche ridden and trite. The film is a riddle, wrapped in a mystery, inside an enigma. Is it August yet? I need Scott Pilgrim vs. the World to show me what a great director can do with similar material.