How Many Years Can Some People Exist Before They're Allowed To Be Free? 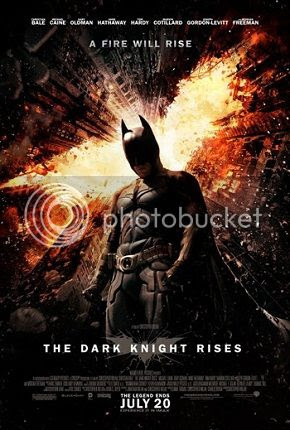 Finality can be unsettling. I recall most of the major occurrences of finality in my life fairly clearly. For better or worse time carries on and chapters of life (this is a phrase I detest, by the way) inevitably draw to a close as we continue throttling forward. As I stood waiting in line at the IMAX, about an hour and a half before Christopher Nolan's final entry in the Batman franchise, The Dark Knight Rises, was set to start the idea of conclusion was set firmly in my mind. After seven years he was prepared to move on, to put a bow on top of the series and pack up. And about 4 hours later, coming out of the theater, the conflicted feelings I usually have with confronting finality were still present in full force. Is this what it's like to end, can it be a satisfying conclusion, or will it all collapse under the weight of the previous movies?

Read more »
Posted by Rich Thorne at 2:29 PM No comments:

It's fairly easy to be critical of 2012 as a year in film thus far, I was earlier this year, mostly because many of the more exciting releases are so insanely back loaded that it seems like nothing has come out. And you know what? That's partially correct, but not entirely true. Sure in order to round out a complete list (mostly because so many foreign films I want to see haven't gotten releases in my neck of the woods yet) I needed to stretch some dates, but the end result I find to be fairly strong. Equally worthy of standing alongside the great year for songs and albums, at the very least.

Perhaps the most surprising development for 2012 in relation to the last few years is the presence of engaging comedies. There have been bad ones that were supposedly great while others that had every right to be terrible were surprisingly funny. It's been a long time since Superbad or Scott Pilgrim, and even if I've seen all the great comedy movies of the year (unlikely since Judd Apatow is holding off his latest for Christmas day) 2012 has been stronger than most years in recent memory. Yeah that's at the expense of drama, but the greats are yet to come.

So what did make the cut? Let us find out.

We've gone through the songs, and that means it's time to start tackling the larger constructs that hold them all together. During my last quarterly review I was hesitant to call 2012 a great year for music at the time because, at that point, the releases were stretched fairly thin. Sure there were some gems, but even albums I thought would have staying power have faded away with what seems like an onslaught of top notch releases since the end of March.

There's quite a bit of ground to cover, so let us commence the counting down!

Read more »
Posted by Rich Thorne at 2:38 PM No comments:

With June now completely passed we have reached the halfway point of the year, and as has become one of my favorite traditions it is time once again to track how all forms of culture have been this year. When March drew to a close it was already shaping up to be a great year for music (both individual tracks and albums), but it wasn't until I sat down to compose this list that I realized just how loaded 2012 has been...and it's only half finished!

Obviously this means there have been a number of tracks that have completely fallen off the list in favor of new entries, and when we meet again in October I reckon there may even be an entirely new batch of songs that have overtaken these based on some upcoming releases and past albums I haven't had a chance to get to yet. Part of that has to do with my stipulation that only one track from an artist is eligible, but even without that there's plenty of great music to discover.

So what's say we cut the chit chat and get in to the heft of the list? As usual, click the song titles to listen to them.