Another year halfway in the books, and another books halfway in the year, am I right? That means that we're at a point where it should be good to really take a deep dive in on roughly the ten best films that I've seen this year. The world of cinema has been, at the very least, pretty solid this year, even with a number of films that were kind of hard to cut down when making this list, even if, overall, I'd think it's more of an underwhelming year for movies thus far. I've been doing, as per usual, some capsule reviews on Letterboxd as I watch things, and also keep a running list of the things that I have watched. But we're here now, the cream of the crop, the best of the best, the list that doesn't include "Anima" because it's still too new and I'm more interested in diving back in than blurting out some thoughts this early, the list that also doesn't have Too Old To Die Young because I'm both still watching it and don't really put TV shows on here even if NWR is on another level with the first five episodes. Oh yeah, list time, baby. 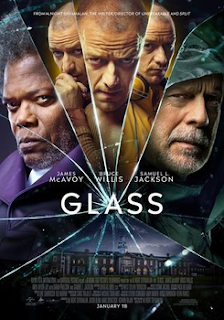 In what feels, at times, like a makeshift trilogy, M. Night follows up two fantastic films, including the previous Split, with one of his more dense efforts. And while the worst part of Split was the reveal of The Watcher at the end, it did lead to this, and all the conversations about the idea of myth making, our fascination with superheroes, the extraordinary, all wrapped up in the visual language that Shyamalan has perfected over his career. The methodical way in which it moves is fascinating on its own, and while there are, perhaps, some squabbles to be had with just how well that translates to the action scenes, the work that Willis, McAvoy, and Jackson bring throughout make form and core cast and film that ought to make some of Marvel's best envious. 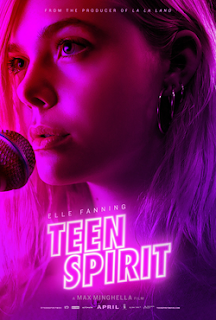 Just as the singing show seems to be waning in popularity (I actually don't know if that's true, I guess there are still a shit ton of them), it finally is the time to capitalize on the trend. Of course, I imagine that may be slightly boring were that the case, even if Elle Fanning is plenty capable of making pretty much anything watchable; however, that's not the case here, as the real driving force becomes less the competition itself and more the journey of self discovery. And it's kind of beautiful, even if it dips in to a few tropes of the coming of age genre while resisting others. For something that has opportunities to be showy, and there certainly are some, it's the quieter moments that tend to resonate the most. Well, that and the songs. Kind of nuts that Fanning isn't just an incredible screen presence, her work on the soundtrack, especially her version of Ellie Goulding's "Lights," is incredible. 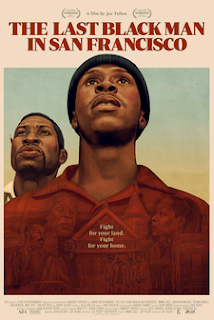 Despite the relative lack of Bird scooters, this look at a city that exists as one of the most notable pillars of gentrification, and the effects of a community pushed aside. There are, as one would expect, different conversations around race and class, all anchored by two amazing central performances, one of which comes from writer and star Jimmie Fails, telling a deeply personal story. And that says nothing of the strong visual work, capturing different elements of the city and accentuating the humanity and making it feel sublime. 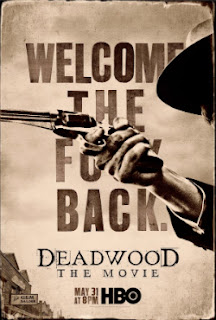 When the show was originally airing, I certainly wasn't watching that type of television, dramas rarely doing much for me, and also probably not having HBO at the time anyway. So, as I prepped for the oncoming film, my experience with the series came one episode a night over the course of the weeks leading up to the Friday debut. And I grew to really love so much about it, though I'm not coming at this with the same perspective as fans who have been waiting since the cancellation for a continuation. While it does feel like two episodes of the show, that feels needlessly dismissive when the two hours here is so good, without being too heavy on the winks and nods and feel good reunions. What stands out is how it serves as a sendoff, but still kind of feels like there's way less resolved than there was at the end of the third season. And that's ballsy, for something that could be just a made for tv movie. 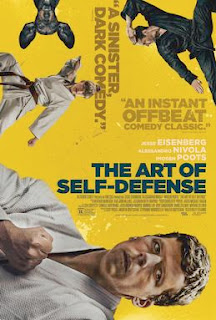 6. The Art Of Self-Defense

A few years back I had the chance to see Faults at the Philadelphia Film Festival with the director, Riley Stearns, in attendance, and when his follow up played at this year's Spring Fest it was pretty much at the top of my interest list. And it didn't disappoint, the tone here maintains a strict balance to very straight laced comedy even when the dialogue gets ridiculous, all housing an examination of the toxic aspects of masculinity. The focused manner in which it goes through this reveals complexities that are befitting of the topic, and does so in an unflinching way. 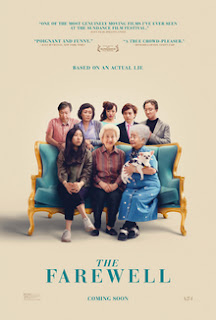 There was a part of me that felt like the recent dominance by A24 might have started to stall out, but looking at how this list is shaping up it seems to be shaping up that they'll take up a majority of the list, and Lulu Wang's kind-of-Awkwafina-vehicle-but-also-really-kind-of-a-family-drama clocks in at a well earned spot. Any conversation does probably need to involve the dynamic performance from Awkwafina, one that plays to her strengths while also giving her room to show off how well she can handle more emotional material. And, as with any successful family drama, the relationships on display are largely complex without spelling everything out, but it's the themes that ended up sticking with me. The lies we tell to ourselves, the fragility of life and what we do to preserve that, and all those other ones you'd expect of the genre. Were I to get in to spoilers, I could say there's one thing that I didn't care for, but, by and large, there's so much emotion in this film that it becomes hard to dwell on minor quibbles. 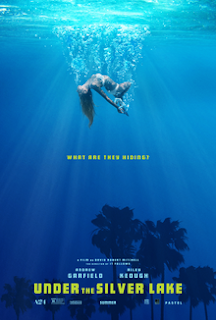 4. Under The Silver Lake

Speaking of A24, the latest from David Robert Mitchell, his follow up to the marvelous It Follows, was finally unceremoniously dumped out nearly a year after it had its Cannes debut. And I get it, the pseudo-noir is meandering, simultaneously too plot heavy while also not really getting too wrapped up in narrative, is relatively long, and stars Andrew Garfield, who audiences seem to be 'over' even if he, once again, shows off his talents as an actor. But it's transfixing. This film is one you can get lost in, until you dive in a bit and start to puzzle out what it's saying about entertainment, storytelling, and societies. It's a wonderful balance of tone, all told in Mitchell's impressive visual style that's marked by a deliberate vigor and use of space. At this point, Mitchell has established himself as such an exciting voice, and he's even more than ready to say that as he hearkens back to his earlier works. In a stray thought, it would be cool to look closely at the role water plays in his filmography. 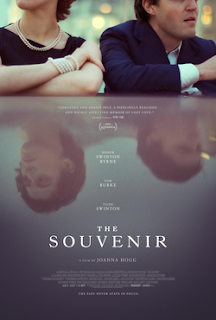 Probably my most surprising entry, Joanna Hogg's latest wasn't really on my radar even when I started to catch wind of how strongly it was reviewing. In a way I think I kind of just equated it to An Education because of a relatively similar two sentence synopsis, but I thankfully ended up being pretty wrong in that assumption. The way that the more insidious elements of the film creep in, subtle and slow at first, make it all the more effective. As is the choice to show us so much of the aftermath, the points where everything simmers, rather than the flashpoints. Not sure what will end up going on with the announced The Souvenir Part Two, or if it's even necessary, but whenever it does come out I'm very ready. 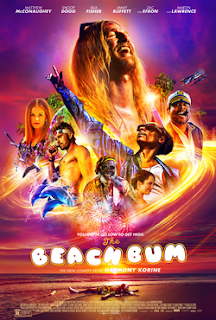 Probably my most anticipated film for like the last two years, Harmony Korine's follow up to Spring Breakers, one of modern cinema's marvels, part of me feels like it should be holding the number one spot. We could, I am sure, start with McConaughey's Moondog, a predictably stunning performance that, while it could feel too knowing, never really goes over the edge. Or Efron, who maybe does go over that edge, but goes all the way over it. The music, while a far cry from Spring Breakers, sets a tone and makes both Key West and Miami not seem like they belong to the pox of the United States. And then there's the camera work, Korine creating a world all its own, with most of the comedy hitting even when it takes the 'stoner' part of 'stoner comedy' a little too literally. The costumes. The everything. You have to go low to get high, and even if it's not presently holding number one, this is one hell of a film. 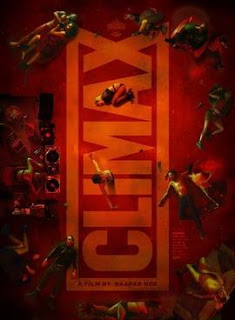 The next logical step from Korine, Gaspar Noe's latest is a visual delight with some of the year's most breathtaking sequences. I'm still not sold on being able to sit down and just watch a dance production for 90 minutes, but in the early portions of the film, at least once it gets past the couple fantastic bits in the opening, really make me think that I could get in to it given the right circumstances. While this, perhaps much like Korine with The Beach Bum, is exactly the thing one would expect Noe to make, right down to the title, perhaps that's for the best when he can make it so well. The soundtrack pounds, the camera gets intimate, and all the beauty so quickly devolves in to a drug fueled sense of mania that it's hard feel overwhelmed yourself at times. But the highest praise I can pay to this, and the reason it secured the number one slot, is that it felt like the best roller coaster, and I cannot remember the last time I walked out of a theater and wanted nothing more than to buy another ticket to the next show and walk right back for an immediate second viewing.

And there we have it, the best films of the year so far. Did I miss anything? Do I need to catch up on certain ones? Let me know in the comments below, and keep an eye on this and Letterboxd for all my steamy film takes.

Email ThisBlogThis!Share to TwitterShare to FacebookShare to Pinterest
Labels: a24, best movies of the year so far, climax, deadwood, drama, film, glass, list, taking on 2019, the art of self defense, the beach bum, the farewell, the souvenir, under the silver lake