Photograph My Mind And Whatever Else You'd Like To Shoot, You Decide

Been a while since I have posted anything, let alone a film review, but I am currently, and slowly, engaging in a process where I examine the career of the world's best actor, Daniel Day Lewis. In no particular order I hope to watch all the films he has been featured in, with the exception of the ones I have already seen (just There Will Be Blood). So Last of the Mohicans, The Ballad of Jack and Rose, My Left Foot, Gangs of New York. All of those films. So, since I am still apparently not finished with 2009 yet, let's start with Daniel Day Lewis' latest film 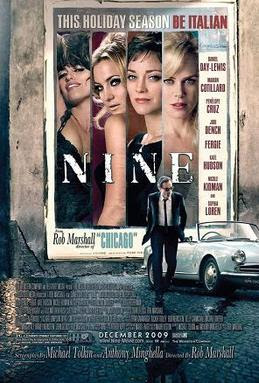 So this is how you follow up the second best film ever crafted, huh Daniel? You're an interesting character, and boy damn is that aspect on display throughout the film, especially since the original actor to play the Guido character in Fellini's classic 8 1/2 was so spectacular that I thought displaying an equally great performance to be near impossible. The Italian accent is not always perfect, but Daniel Day Lewis is a force on the screen throughout this film. Each and every movement is so perfect, so accentuated, so completely realized. Hell, there's a scene towards the end where he says nothing, absolutely nothing, and his face speaks more than anyone else in the film. Now that is not to say that the cast is bad in the least, Hudson, Cruz, Marion, and Dench are all almost equally spectacular in their roles, and even the other minor characters are never weak in the parts they play. The cast truly is one of the films strongest points.

Also strong, as one would imagine, are mostly all of the musical numbers. Generally when the film goes for 'big' numbers they all succeed, and sadly the mostly reserved numbers, with the notable exception of "Guido's Song," are not as memorable. But between "Be Italian," "Cinema Italiano," "Take it All," and a number of the other tracks we have one Hell of a collection of tracks that really help keep the narrative focused and the themes mostly apparent, which is incredibly important in a film of this variety. I want to be Christ, Mohammad, and Buddha, but not have to believe in God! Nine attempts to walk a very delicate line, existing as an adaptation of Fellini's 8 1/2 but also existing as a stand alone effort. For the most part much of the narrative structure of the film is similar, and even during the "Be Italian" sequence it seems as if the black and white footage is directly lifted from 8 1/2, but the film definitely explores different themes than the original film, which culminates in a radically different ending, but it certainly works in the context of the film and, despite initially disappointing me, is an incredibly fulfilling and suitable stopping point. However, had the film had a couple of more hours to add in a few more tracks and flesh out more of the plot lines the film would likely have been closer to a truly fantastic film.

When it comes down to it, Nine delivers as a truly enjoyable and never slow ride through a fairly fascinating musical. The film is paced excellently, looks great early on, though a good deal of that director's specific vision is lost in the second half, and tells an engaging narrative that really does bleed a style that seems lost in the modern age. What Rob Marshall does with the film is truly impressive and I do wish we had more time to spend in this world because, just like the original, Nine is a layered and complex film, one that would not initially appear so given its genre. Oh yeah, and it helps that Penelope Cruz is not only the best female actor working today, but also the prettiest. And Daniel Day Lewis. What a damn powerhouse. Without a doubt the best actor still starring in films. He has a natural talent and presence, one I was not sure I would be able to find since my only exposure to him thus far has come in the form of There Will Be Blood, a performance I feared would be inseparable from the actor, that is comparable to the once in a lifetime greats. There's Paul Thomas Anderson making movies, John Darnielle writing songs, and Daniel Day Lewis acting. I can't wait to continue with this marathon. 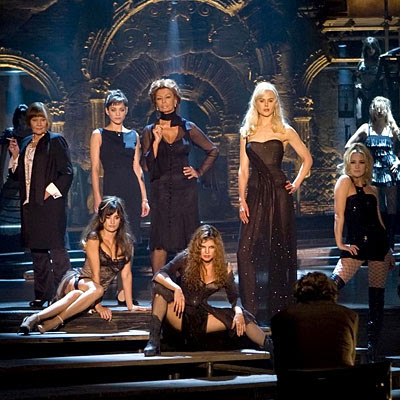 Also I am on the old Twitter thing so I guess you can follow me at twitter.com/FLYmeatwad.
Posted by Rich Thorne at 4:52 PM