Here is the challenge, friends, I am going to look from February until December and pick one film, just one, that I want to see more than any others that month. I'll tell you why. We'll get through the doldrums, we'll make the tough choices when there are so many films in the summer and during Awards season 2011, we'll chop these films together. The current year has a plethora of directors returning to the big screen after a couple of years off, some more, some less. Either way, 2011 is the year to be excited for cinema. Let's start the journey. 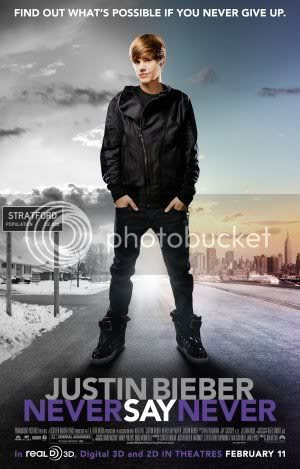 It has been a couple of years since the Jonas Brothers 3D Concert extravaganza launched, and despite not really being a fan of Justin Bieber (not being a fan did not impede my seeing the Miley Cyrus or the JoBro's docs) this 3D exploration of the making of an icon seems like the best February has to offer. I am not going in expecting to be blown away by Bieber's musical prowess, but like the other teen star films before it there is an interesting layer of cultural awareness that can be gleaned from what non-concert footage the film offers. That is my hope anyway. We live in a world where youtube breeds celebrities, hopefully the film explores this idea, or a similar one. Also, I want to hear "Baby" and "Runaway Love" on the best speakers possible. 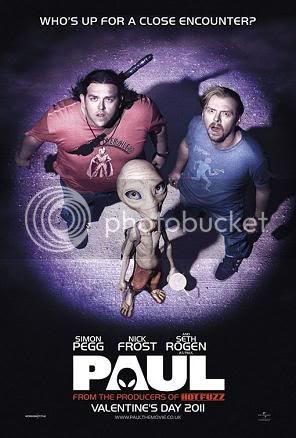 Greg Mottola is responsible for two of my favorite films of all time, Superbad and Adventureland, so by this point in his career I am willing to check out whatever he directs. When he directs a film that stars Simon Pegg, Nick Frost, and Seth Rogen, and also boasts cameos from Jason Bateman, Kristen Wiig, Bill Hader, Jane Lynch, Jeffery Tambor, and others then you instantly vault to the top of my must see list. Comedy is a tough genre to nail and the trailers for this film have not been stellar, but Mottola's other films were not always notable because they were packed with one liners, they are remarkable films because of how well each joke is set up and pays off, how he gets the best performances from his actors, because of Tommy Frigo! We are not alone, we are in Mottola's hands now.

April
Meek's Cutoff
Outside of this being Kelly Reichardt's follow up to Wendy and Lucy, and also starring Michelle Williams, I do not know much about this period piece. It played at the New York Film Festival a few months back, but I was not able to make that trip. This month is loaded with heavy hitting directors (David Gordon Green, Duncan Jones, Wes Craven), but Reichardt easily takes the most anticipated crown. The world needs more female directors, especially when they consistently turn out top notch products. Really I need nothing more than the promise of more Reichardt and Williams to make this the most exciting trip down the Oregon Trail since the PC days. 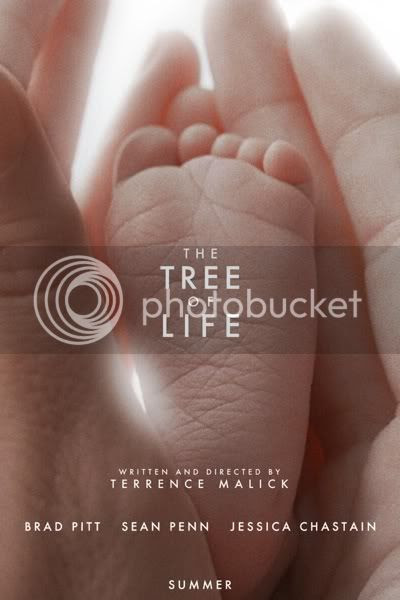 The Tree of Life
Terrence Malick makes a film about once every ten years. This is that film. The trailer gives me chills. I have no idea what this film will be about. I don't need to know. Right now I am still not entirely convinced that this film is going to come out in May, as its release earlier in the month has already been pushed, and the director, the actors, and the trailer do not scream May film, they scream Oscar film, but lets say this does not get pushed back to Awards Season, lets say it comes out on time. Malick delivers fantastic visual experiences and beautifully honest portrayals of whatever experience he decides to take on. I have only seen Days of Heaven, a fantastic film, and The Thin Red Line, a perfectly crafted film that I dislike, but I imagine neither of these at home experiences will compare to seeing what he does on the big screen. All. That. Wheat.

Honorable Mentions: Pirates 4? (Penelope, what are you doing?), There Be Dragons, if Malick's film doesn't come out May looks pretty dismal.

I don't care for J.J. Abrams' films. I don't like Spielberg's films. The trailers for this film look terrible. It will probably be a big, dumb, hollow, action film, which I tend to despise. X-Men: First Class is infinitely more exciting on almost every level. However, after giving the second, possibly first, best performance of 2010 I will literally see any film that Elle Fanning has a role in, and Super 8 fits that bill. Plenty of people are excited for this one, I'm sure, and I guess I should be, but whatever. Go Team Elle! 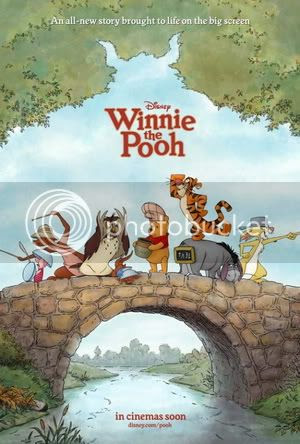 Winnie the Pooh
This film is Disney doing another hand drawn animated film. Now I didn't fall in love with The Princess and the Frog, but these are characters I know and its a story that I plan on reading prior to the film. From what I hear this collection of brand new vignettes into Pooh's Hundred Acre Wood more closely follows the actual stories that spawned the Disney character, and those stories are apparently packed with emotion. Beautiful emotion. The emotion that Pixar tries to capture, but tends to only artificially recreate. I did not really grow up with Winnie the Pooh, but the first film was a part of my childhood and I would be doing myself a disservice if this did not occupy this month's slot. Besides, imagination! Who doesn't love imagination!

Honorable Mentions: Transformers: the Dark of the Moon, Harry Potter and the Deathly Hallows: Part 2, Friends with Benefits

August
The Sitter
The next few months are going to mostly be guesses for me based on the pedigree of cast and directors. As such, David Gordon Green makes the list again with what is apparently a(nother) comedy anchored by a couple performers I love. Jonah Hill and Sam Rockwell are the names that stick out in this cast, and while that dynamic does not seem as promising as the Franco/McBride combination of Your Highness I have hopes that all the talent will not be squandered. Besides, it's David Gordon Green. And Same Rockwell. And Jonah Hill. What do they all have in common? They are all brilliant minds who have found success in both comedy and drama, so the hope that Gordon Green attempts to blend all that together has me ready for my month of birth to roll around even quicker.

Jim Sheridan is not one of the most famous filmmakers working today, and that may very well work to his advantage. With a resume that boasts films like In America, Brothers, and Get Rich or Die Trying Sheridan has compiled a startlingly full filmography. Daniel Craig is not one of my favorite actors, but when you have a man like Sheridan behind the camera it likely does not matter. I just hope there are some child actors, no one gets performances out of child actors quite like Jim Sheridan.

October
Contagion
Matt Damon, Jude Law, Kate Winslet, Marion Cotillard, Gwyneth Paltrow, Larry Fishburne. With a cast like that what more do you need? Oh yes, you need Steven Soderbergh. Such a combination is almost unfair. Add in the fact that this may very well be the last film that Soderbergh ever directs and I promise I will be in the theater the day this film opens.

The Muppets
Jason Segal has been talking up with remake since he got involved. At this point in time I do not know exactly what the film will be about, but I can say that Segal will bring a passion to a franchise that has existed without passion for many years. It also helps that, for the most part, November is a rather lackluster month considering the time of the year. Still, take the slot anyway you can get it, Jason.

Honorable Mentions: Immortals (though in retrospect this should have gotten the slot), The Twilight Saga: Breaking Dawn Part 1

December
Hugo Cabret
I have been an outspoken defender of the potential power of 3-D in the cinema, when used properly. While many studios have not heeded my words, evidently my sway on the other coast is not huge, it almost does not matter when you have one of cinema's most beloved storytellers bringing his own unique touch to the technology. All you have to do to make sure I'm in a theater is tell me that a film is directed by Martin Scorsese, but then you also add in Sasha Baron Cohen, Ben Kingsley, Michael Stuhlbarg, Ray Winstone, Christopher Lee, and Jude Law on top of the promise of Marty taking on 3-D and I am ready to order tickets to a midnight showing. After last year's amazing Shutter Island and 2006's beautiful The Departed I can easily say I am a massive fan of new-Scorsese, and I have high hopes that Hugo Cabret will be another feather in the prolific filmmaker's theoretical hat. It takes a lot to beat out Cameron Crowe and Elle Fanning teaming up, or David Fincher's follow up to The Social Network, but this film does just that.

And to top off the list some potential 2011 releases currently without release dates:

Skins: Apparently focused on Generation 2, the film version of the UK series also will connect to Generation 1 in some way as wikipedia says that Dev Patel and Nicholas Hoult will make appearances. I am still going through the series, but I hope this gets a US release by the end of the year.

Twixt Now and Sunrise: Hey, Elle Fanning was fantastic with Sophia Coppola, why should she be anything else with Francis Ford Coppola?

Uncle Boonme Who Can Recall His Past Lives: This should be released in 2011, right?

Restless: Gus Van Sant made a film, it should be fantastic.

Homework/What's Wrong With Virgina/Emma Roberts: You don't hold the title of Best Actress Under 35 and not make this list each year.

Monte Carlo: It's Selena Gomez, she was great in films last year, is should not stop in 2011

The Suite Life On Deck: The Movie: This show is ending, and I am sad.

LOL/So Undercover: Miley Cyrus is a talented enough actress, I wish her success, so I will support her films.

The Lucky One: imdb says Zac Efron is also in New Year's Eve, which may mean Marty does have a run for his money.

Cave of Forgotten Dreams: Werner Herzog making a documentary about caves...in 3-D! What more do you want?

There are other films I am forgetting. What are you looking forward to? What did I forget? Let me know in comments!

Also I am on the old Twitter thing so I guess you can follow me at twitter.com/FLYmeatwad.
Posted by Rich Thorne at 4:30 PM