Though His Mind Is Not For Rent, Don't Put Him Down As Arrogant 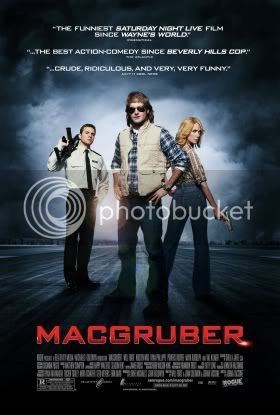 MacGruber (Taccone, 2010)
Saturday Night Live has lately been in a state of flux, hovering between relevance and trite for the past few years, perhaps even longer. The current crop of comedians have found successes, albeit small ones, by filling bit roles in semi-successful comedies. And then there's Andy Samberg, a man who is probably better left undiscussed. The point is that, even in the subjective world of comedy, the current Saturday Night Live crowd barely carries the weight of a The Ladies Man, much less The Blues Brothers. However, this contextualizing, I would argue, is in all likelihood irrelevant when discussing the latest SNL skit turned film. When it comes down to it, MacGruber is just damn hysterical.

MacGruber is a standard action comedy that follows the titular protagonist, portrayed by the insanely charismatic Will Forte (seriously, just the way he contorts his face is insane), as he attempts to prevent a stolen nuclear missile from being used to threaten the lives of innocent Americans. Lost to the world for ten years MacGruber retreated to Ecuador, but when the opportunity to take down the man who killed his wife, Cunth, presents itself he returns to the front lines for some throat ripping action. In his return to the States he is partnered, unwillingly, with a rookie prodigy, Lt. Piper, and former teammate, Vicki St. Elmo. The three attempt to work their way through Cunth's dream team of killers in order to stop the nuclear threat, and along the way we watch MacGruber deal with the loss of his fiance in an attempt to reconcile his past.

To be honest the plot is basically lifted out of any Sylvester Stallone film, and for the most part MacGruber does little to challenge the construction of these higher concept action movies. Where this film succeeds is found in the integration of the comedy in to the hyper-serious action genre. While most of the other actors play their roles perfectly straight, Forte puts in an over the top turn as MacGruber to create a tension that elevates the comedy beyond simple sight gags and one liners. MacGruber walks a fine line between action and comedy, rarely tipping the scales in any one direction for very long. The jokes are self aware, they are over-the-top, and for the most part they are insane and completely unrealistic, but in the world the film creates they are also believable. The action film is a genre that mostly exists in absurdity, MacGruber embraces this quality a presses the boundaries between absurdity and believability to create a comedy that is bold, if not a bit uneven.

Even in the comedic construction the film is structured like an action film, moving quickly and rapidly from one set piece to another with little time to breathe between any of them. But the set pieces are not the usual explosions and car chases; instead, we are given Kristen Wiig being talked through a coffee shop in a misguided attempt to pass herself off as MacGruber. Or we get Forte assembling his crack team of killer killers. Along with more surprising jokes that are better experienced in the film than through my review, if only for the shock value of the larger gags. Despite these situations all being presented as set pieces none of them feel disconnected from the larger narrative either, keeping the film from feeling like a series of mini-skits inside of an elongated sketch.

I can easily see MacGruber as an alienating experience, the comedy achieves a quality of mindlessness and wit practically at the same time which makes watching the film confusing and aimless at times. It is also a comedy, which means that if you are not on board with its comedic sensibilities there are few aspects beyond the jokes and the technical construction of the film to latch on to, for the most part the film is devoid of subtext. However, even if most of the laughs do not land I have a hard time calling MacGruber a bad film. Much like the character itself the content is presented with a boldness matched only by MacGruber himself, and it is hard to get down on such a display of self assuredness.

Also I am on the old Twitter thing so I guess you can follow me at twitter.com/FLYmeatwad.
Posted by Rich Thorne at 7:51 PM