All I Want Is Everything, Does That Make Sense? 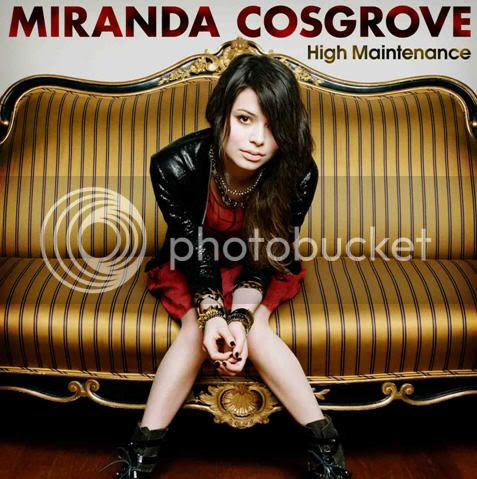 Miranda Cosgrove - High Maintenance (2011)
Last year Miranda Cosgrove, teenage starlet of Nickelodeon's wildly popular show iCarly, released her first full length album, Sparks Fly. The record was, essentially, a brief 8 track sample that blended an inconsistent mash-up of styles. Much like other teen actresses turned singer (Selena Gomez), Cosgrove's debut was more notable as an experiment that seemed to throw as many styles at the wall in hopes that something would stand out. To be completely honest the record reminded me of being at a hospital, watching over a loved one strapped to a life support machine; at times there are peaks, you might even convince yourself that there's some hope, but ultimately you know how things are going to end. Suddenly a flat line fills the air, all your fears have been realized. But sometimes miracles happen. In the distance you hear a faint beeping. High Maintenance is here.

I approach any record where the primary artist does not write the songs with a great hesitancy, and while Cosgrove is given a partial writing credit on one of the tracks the CD never feels as if it is some great passion project pulsating with creative intensity. On her debut album she worked with Ke$ha on a song, one of the more racy tracks of an otherwise tame record, but here she teams up with the likes of Avril Lavigne and Rivers Cuomo, the latter also happens to be featured on the titular track. Teaming with these titans, Cosgrove seems to be making a push for pop supremacy, and the energy she brings to the Lavigne penned "Dancing Crazy" is a Nevildine/Taylor jolt that sets the tone for the rest of the brief record. Cosgrove's sound has been, in one short year, so refined and defined. She may not completely exist as an artist on the CD, but as a conduit and interpreter she brings an up tempo charm and playfulness to each track that marks her territory as a legitimate name in pop music.

But Cosgrove exists as more than just a name, and this CD is more than a staked claim in an supersaturated genre. She has discovered more than just a sound, more than just a vocal presence and identity, what the CD ultimately yields is an aspect that so many of her contemporaries have actively sought: maturity. The record's standout track, "High Maintenance," has Cosgrove question: "So what if I break a few glasses/kick a few asses?" Ignoring the subpar rhyme, the line is simply glossed over. But for a girl who makes her fame selling product to the youth this moment of seeming insignificance is a leap. But by keeping this casual, along with the inclusion of tracks like the Shontelle covered "Kiss You Up," Cosgrove quietly matures, unlike the needlessly abrasive cries for maturity heard on the Miley Cyrus CD Can't Be Tamed. Cosgrove does not give off the sense that she is a dog chasing the tail of maturity, it feels natural, it feels refreshing. I have walked in the forests, bathed in the streams, my faith has been restored.

Faith, however, is easy to shake, ye heathens. While the five songs that make up the EP are tightly wound, wonderfully united, each one has an odd trend of simply ending. There's no major climax, they don't even fade away, the songs simply stop. For a record so refined and developed the quick conclusions are jarring. The first song is perhaps excusable, but I can only be shaken around so long before it becomes annoying. But I pick nits when my complaints starts to be about the last couple of seconds of what are otherwise well constructed tracks. The backing beats pulse, the tracks are slightly overproduced, Rivers Cuomo sings about a quasi-relationship with a girl who is nearly young enough to be his daughter: this is pop.

Miranda Cosgrove is not an elite artist like Demi Lovato. She is, in a few ways, closer to an experiment in the sames ways that Lady GaGa exists in an experimental space. But they all exist on my iPod. High Maintenance does not ask you to question your world, it will bring only about as much transcendence as an hour session speed reading William Wordsworth, but sometimes Wordsworth is all we need. The daffodils dance, they dance crazy, and they never stop.
Posted by Rich Thorne at 8:03 PM