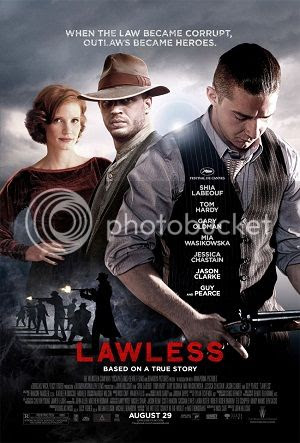 Criminal behavior has always been a source of inspiration for the cinematic well for many years. Some of the most beloved contemporary films focus on gangsters and lawbreakers. So when you tell me that John Hillcoat, director of The Proposition and The Road, is making a movie taking place in early 1900's Virginia with a star studded cast of critical darlings (and Shia LaBeouf) one would expect the results to be great. But sometimes when approaching the wrong side of the law, as we do in the aptly titled Lawless, there's the chance that all the thrills can come at the expense of engaging characters or relationships. So does Hillcoat construct a beautiful tapestry of criminal redemption or does he deliver little more than wasted potential?

Reaching an answer there is difficult for a multitude of reasons. As we follow the Bondurant brothers, with the bulk of the time focusing on Forrest (Tom Hardy) and Jack (LaBeouf), bootlegging whiskey and standing up to those pesky lawmen who demand too hefty of a cut, it feels like the film is just going through the motions. Certainly there are characters here, and they are interacting with one another, but despite the best efforts from all of those in the film there's never any sort of weight to the interactions.

It seems odd because Lawless seems to have just about everything I look for in a movie. When Hillcoat displays the landscape it fills the frame, when the film alternates from the absorbing darkness to the wild light it borders on magical, but when I started prodding a bit I'm not sure there's much else going on behind the scenes. I've been grappling with the film since seeing it, and amid all the flashy violence there doesn't seem to be much of a purpose. Yeah it works in traditional romance plots and reinforces family values, but the only scent of thematic resonance I found was an underdeveloped notion that the law is actually more corrupt than the criminals.

And that is incredibly disappointing. For a film so full of potential, and one that executes most aspects so well, I wish I could have loved it more. Yeah it's an entertaining watch, a movie that I could probably recommend to just about anyone and safely say that they would have at least a decent time, but I can't remember the last time I've come away from a film that I would call highly accomplished and felt so unfulfilled.

Though it's easy to be impressed by Hardy (perhaps his third best performance) and LaBeouf, who continues to cement his name, there were a few disappointments. Gary Oldman only has about two or three scenes in the film and while he makes the most of them similarly underutilized talents like Jessica Chastain and Mia Wasikowska just are not given enough to work with to make their performances stand out.

For a movie that seems to value the historical roots of this story, there's not too much of a focus on that while the film actually plays.