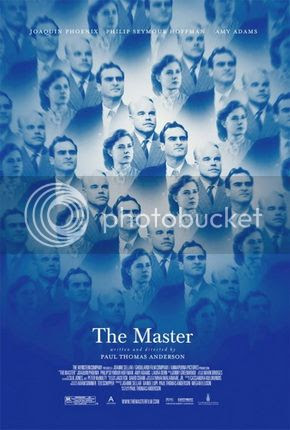 Growing up I remember that every so often in English class we would do a unit on speeches. Generally it was tied in with Martin Luther King Jr.'s famous "I Have A Dream Speech," though there were others that tended to be used as well. Actually when I was student teaching and even when I was co-teaching I used speeches as a focal point of lessons. These master orators have, even before the technology existed to record what was being said, had their words preserved for generations to heed. Somewhere, buried beneath these moments in time, is a theoretical common spring of humanity that allows them to remain relevant. But is this timelessness locatable? Is it even true?

If you read my most recent Top 97, you would notice that sitting atop that list is Paul Thomas Anderson's 2007 masterpiece There Will Be Blood. As such, it was with great anticipation that I approached The Master, a fictional re-imagining of the Scientology movement coupled with the journey of a returned WWII veteran who finds himself wrapped up in this movement's early days. But, as tends to be the case with Paul Thomas Anderson's films, it's rarely just about what's on the surface.

Initially what jumps out about The Master is the technical precision found in each frame. From the Jonny Greenwood score to the actual composition of shots, the placement of the camera, on a technical level the film succeeds in spades. One of the first shots we see in the film is of the ocean, a blue and white marvel simply existing. It is with this graceful fluidity that the camera works throughout the rest of the movie. There's a sense of freedom achieved when the camera floats around rooms rather than always cutting from shot to shot that makes for a visually intense experience.

While most of the action is centered around the interactions between Lancaster Dodd (Philip Seymour Hoffman) and Freddie Quell (Joaquin Phoenix), what elevates each moment they share the screen together is the juxtaposition that is used in the character each inhabits. While both performances are stunning, Hoffman's Dodd is much more in control of both his physical demeanor and the language he uses. Every line delivered seems like each word was pulled out of a dictionary in order to create the optimal sentence. It is this vocal eloquence, when contrasted with Quell's much more plainspoken demeanor, that creates such a compelling speaker. One who is able to embody restraint, but also one who is still trapped by the limitations of his humanity. Each man seeks a sense of validation that only the other can give, but the futility of validating existence underscores the central tragedy.

Though the film's languid pacing may be a turn off for some, this makes the build to the crescendos sprinkled throughout the film that much more effective. And in many ways The Master, like There Will Be Blood before it, is a well oiled machine. It's easy to probe at certain parts and understand how techniques are functioning and why they work, but even when doing so it's just as easy to be completely unaware of what forces are at work until the very end. Even the conclusion (which I won't spoil in this post) is not a traditional means of cathartic release, but when the final title card flashed and the lights came up I let out a held breath that I didn't even know was there.

And that, likely, is The Master's greatest strength, it's ability to make one aware of existence. Even if we can't find an answer, even if we don't know what kernels of humanity are found at the center of all these famous speeches or golden words, we have an awareness that something is there. Perhaps that's an illusion, perhaps it's not. I'm not sure we can ever completely know. But it gives a sense of truth, a feeling of interconnectedness that reflects as far back as it projects forward toward an unknown future.

And damn if that's not impressive.

Didn't much mention Amy Adams because, as tends to be the case with recent films featuring her, she's not given a ton of screen time. That said, when she is on screen she is every bit the equal of Phoenix and Hoffman.

Speaking of which, I know that this is technically Freddie's film, and Phoenix will be considered for Best Actor while Hoffman will likely be in contention for Best Supporting Actor come Oscar time, but I have a hard time not saying they are co-leads as both are so connected and dominate the screen for so much of the running time that Dodd certainly doesn't feel like a supporting character.

I'm going to do a spoiler post later this week, ideally after sitting with some thoughts a bit more, reading up on other interpretations, and seeing the film a second time.

There have also been a lot of comments out there about how this film kind of demands a second viewing. I can't really say either way, nor do I think it has much value to the conversation (aside from providing blog post fodder, in which I may indulge anyhow) because all films benefit from re-watches. I think I have an understanding of the film after a single viewing, that tends to be the case with all movies, but I also think watching it again will clarify certain points and allow me to consider others, which is also the same for all films.

I did not see this film in 70mm or 35mm, so take that for what you will. I really would love to go to NYC to see it in 70mm or even Philly for 35mm but I'm not taking the former trip alone and I'm unsure when I'll find the time for the latter.

And if you want to know what I'm watching, listening to, playing , and reading you can follow my tumblr account!
© 2012 Richard James Thorne
Posted by Rich Thorne at 3:32 PM