Screw Rehab, I Love My Addiction. No Sleep. No Sleep. I Am Always On A Mission 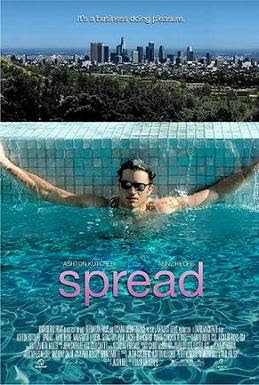 It seems almost universally American to, at some point or another, fantasize about an easy life out in Hollywood. Perhaps as an actor, a writer, a director, a singer. It's your fantasy, not mine, any aspirations I had to venture out west dissipated many years ago. However, the life of Ashton Kutcher's Nikki in Spread is almost enough to place the stars back in my eyes, drop any cynicism, and try out a life filled with great meals, beautiful women, and no work. Of course this, rather predictably, does not completely work out according to Nikki's plan, which is where much of the tension can be found in David Mackenzie's fourth feature film is found.

Mackenzie works a wonderful camera as the Kutch lights up the screen as the disengaged playboy, Nikki. Similar to Josh Peck in The Wackness, Kutcher is sometimes a bit too detached for his own good, but he brings a compelling personality to a figure who is easy to play solely for laughs. Nikki is humorous, by nature, but he is also a self destructive force who has too much ego for his own good. He's a fascinating central figure to begin with, but Kutcher's spin on the character makes the film even more compelling. No other supporting actor is worth mentioning though, even Heche does not make the most of her screen time. Thankfully none of the supporters hurt the film either, so I find any specific complaints too minor to worth mentioning.

Spread is nowhere close to a flawless film and I can see it alienating many audiences, but the film glorifies the fast life and tears it apart, all with an underlying darkness that one would not expect to encounter in a film starring Ashton Kutcher. Helped along by a noticeable technical precision, Spread is at worst an interesting character study, though given the final scene and the thematic development throughout the film I am certainly willing to call it one of the year's most overlooked films.

Also I am on the old Twitter thing so I guess you can follow me at twitter.com/FLYmeatwad.
Posted by Rich Thorne at 3:08 PM