You Say My Kisses Are Not Like His, But This Time I'm Not Gonna Tell You Why That Is 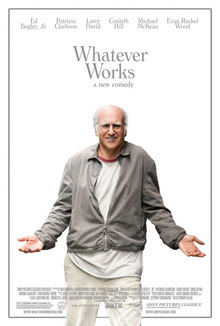 I've only seen two Woody Allen films, Annie Hall and Vicky Christina Barcelona. The first gets better with each viewing while Allen's first film in Spain had me rather enchanted upon an initial viewing. I have seen every episode of Curb Your Enthusiasm, so the inclusion of Larry David had me ready to partake in some of the year's best comedy courtesy of one of my favorite funny men currently working. The inclusion of what I hoped would be trademark Allen dialogue only strengthened my determination to enjoy the film.

Luckily, I was not disappointed as the laughs are plentiful and David proves to be almost as capable of handling Woody's dialogue as Mr. Allen himself. The inherent cynicism that Allen displays in Annie Hall is all here, perhaps even more so, and is delivered pitch perfect by David, who even puts his own comedic spin on the character to keep him unique and interesting. The supporting cast is decent as well, though no one brings the laughs quite like the leading man, so when David is not on screen the film usually falls flat. However, Evan Rachel Wood is great as Melody, though she's also a blonde from the South who spouts off depressing, mostly nihilistic musings about life, so I may just be in love with the character.

The story here does not take many twists or turns, and the end is rather generic, but the real surprise for me was that Allen's camerawork, which was fantastic in VCB, is not only standard here, but mostly as generic as the script. The visual aesthetic was so bland and lifeless that I can see this aspect being the alienating factor capable of keeping people from enjoying what is otherwise a pleasant comedy that does not outstay its welcome. Allen's camera does not enhance any themes found in the film, it does not humanize or dehumanize any of the characters, it simply exists, which is odd when one factors in the idea that each of the characters here do have a unique story. I can see people having problems with the fourth wall breaking, but unlike the camera those portions of the film are usually used to enhance the comedy or to provide some insight into Boris' character.

While Larry David is great, the real star of the film is the dialogue. Personally, I think the writing here is just as sharp as what is found in Annie Hall and I think as a pure comedy there are more laughs to be found in Whatever Works than there are in either VCB or Hall. The film is not much more than a pleasant distraction, and neither the comedy nor the narrative are fleshed out enough to sustain even the lean 90 minute run time, but David knows how to handle Woody's words and the laughs are plentiful, so there is definitely enjoyment to be had here, even if the insight of Allen's earlier films is not as present.

Also I am on the old Twitter thing so I guess you can follow me at twitter.com/FLYmeatwad.
Posted by Rich Thorne at 4:53 PM