She Was Born In Spring, But I Was Born Too Late 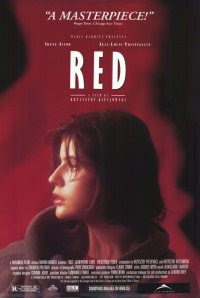 I entered Krzysztof Kieslowski's final entry in his Three Colors Trilogy, Three Colors: Red, with a great deal of uncertainty tinged with a splash of hopefulness. I had little frame of reference for this film, knowing little about the actual plot that would be explored and having never seen another film from the Polish director, but the reputation these films have built up since their release in the early 1990's is astounding. However, outside of the reputation I did not know the plot of this film or its exact connections to the previous two films in the trilogy. So after sitting down to confront this film would it have been better to build context with the other two films or will I have to already begin revising my Top 97?

Focusing on a few days in the life of model Valentine (Irene Jacob), Kieslowski explores a fairly basic idea of coincidence and fate in an individual's life, but to say that the film is only about this concept seems dismissive of the breadth and intricacies that the director has crafted. Valentine encounters a retired judge, Joseph (Jean-Louis Trintignant), who spends his days eavesdropping on local phone calls. Trintignant brings a mysterious quality to the judge character though that does not make him a condemnable figure; instead, the man acts as either a sage with specific insight to the world around him and Valentine or as a mirror image of a judge to be, Auguste (Jean-Pierre Lorit). Auguste exists earlier in the film as a third party who seems fairly unconnected to the plot, but as the movie progresses we see his importance grow.

Kieslowski establishes and reinforces this importance through masterful camerawork that relies on the doubling of shots that directly and indirectly asks the viewer to begin connecting the characters and places to one another. Throughout the film we see Auguste and Valentine share the screen, but they always pass each other or come in and out of frame only seconds apart, not directly establishing a connection but giving the viewer a feeling that the two are propelling to a common meeting point. What I find so genius about the construction of the film is not in how on the nose some of the mirroring of shots is, but rather on how well it works with the overall feel that Kieslowski establishes through the uncertainty in the existence of Joseph. Early on I felt a sense of tension between the deliberate construction of the film, the abundant use of red and the far too perfect coincidences (the cafe named Joseph, the book falling in the road, and a few other occurrences), and the natural way that individuals develop connection and romance in the real world; however, the possibility that Joseph has an insight to Valentine's life and is helping propel her toward a meeting with Auguste extends the idea of coincidence to have it clash with the idea of fate.

Initially I did not find Red to be an overly compelling watch, but even just a day later the film has settled incredibly well. The film is not without its share of flaws, the actual film does take a while to get started and because the ideas are so well developed and reinforced through the camerawork the actual plot is mostly mundane. The film establishes a tone incredibly well, so well in fact that I was nearly prepared for the film to simply stop when the mood had been sufficiently built. But the way the film elevates itself from that stopping point to take on so many more concepts is simply staggering and has me interested to check out the rest of Kieslowski's filmography.

Netflix Rating: ****/*****
Rich
Comments are welcome and, for anyone with a literary mind, I encourage checking out my poetry blogfilled with all original works for your reading pleasure. Or if video games are more your thing, I have a blog dedicated to all gaming news, reviews, and opinions.