After the dearth of positive reviews, order has been restored to the world once more as a film that scored 'fresh' on Rotten Tomatoes actually topped the Box Office. Further validating the ways of the Hollywood system, it was naturally a quasi-remake of a licence that had been relegated to a throwaway punchline in another Jonah Hill film. Sometimes life imitates art, and sometimes art imitates life. And then we are all just living in the simulacra. 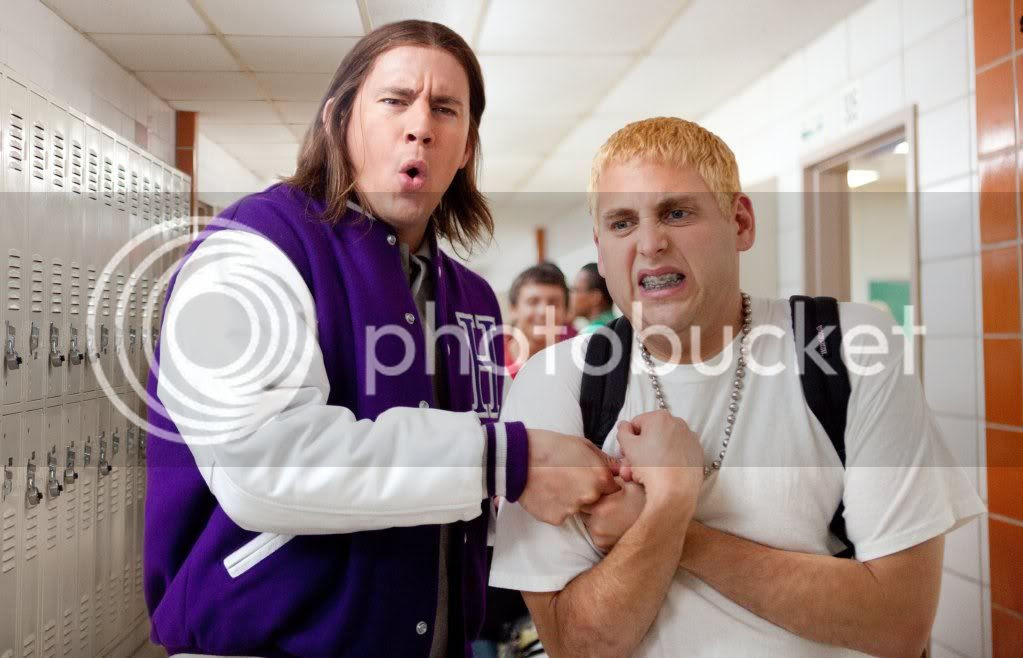 The notion that an R rated comedy could make money was dismissed years ago when Judd Apatow started smashing all kinds of records, but lately the quality of these more extreme comedies have been hit or miss in terms of critical reception. Now I have been watching a lot of Mad Men lately in anticipation of the season premiere, and if there's one thing Don Draper taught me it's this: people are attracted to nostalgia.

So of course we all want to return to the world of high school as adults, and now we can live vicariously through Channing Tatum. Or Jonah Hill, if that's your cup of tea. He is an Oscar nominee after all.

Aside from the top three films this week (21 Jump Street, The Lorax, and John Carter) everyone else fought over the scraps. Sadly, even with a box office as fractured as the GOP race (count it, there's another easy GOP joke coming up!), new film from Mark and Jay Duplass, Jeff, Who Lives At Home, only brought in $840,000. But even the big guns ought to cling to whatever cash they make over these next few days because the behemoth is on it's way come Friday when The Hunger Games releases. Big or small, we will all be consumed.

Check below for a full list of the films that will be rendered irrelevant at the hand of Suzanne Collins.

1. 21 Jump Street
$35.0M / NEW
I actually hear this is pretty good, and despite the trailers and my Jonah Hill fatigue, I look forward to getting a chance to check this out sometime later this week. Leave it to the minds that brought you Cloudy With A Chance Of Meatballs to drum up the first exciting R-rated comedy in a while. Could there be a more perfect fit?

3. John Carter
$13.5M / $53.1M
It can't feel great being Andrew Stanton right now. Not only does your big budget transition from animation to live-action get beat out by a CGI animated film two weeks in a row, but now you're also behind another animation to live-action debut for like-minded filmmakers. Continue to take solace in Brad Bird, Mr. Stanton, you'll be back!

4. Project X
$4.0M / $48.1M
Waiting for the inevitable Cloverfield and Chronicle crossover where all the kids at this crazy, wild, amazing, hyperbole party find themselves running in terror.

5. A Thousand Words
$3.7M / $12.1M
Though earnings were down this film actually climbed a spot from last week. At this rate it will get to number one and make back that $40 million budget in no time!

6. Act Of Valor
$3.6M / $62.3M
The success of this film can only be comforting to the majority of the remaining GOP candidates. Good to know that war can still be packaged and sold with little consequence.

7. Safe House
$2.8M / $120.2M
It's not surprising to see that a movie starring Denzel Washington and Ryan Reynolds has made this much money, but its staying power is pretty crazy. This type of success can only lead to more pairings of Washington with dramedic actor of the month, which has to be exciting for someone. Right?

8. Journey 2: The Mysterious Island
$2.4M / $95.0M
Never, ever, question the draw of watching Duane "The Rock" Johnson bounce fruit back and forth between his pecs! An impressive two spot rise from last week. Keep bouncing, Duane, keep bouncing.

9. Casa De Mi Padre
$2.2M / NEW
Boxofficemojo doesn't have a budget listed for this film yet, which I sincerely hope means this film cost almost as much to make as John Carter; however, I would be equally happy thinking that Will Ferrell is paying for these projects out of his own pocket. No one thought it was a good idea to green light this besides Ferrell himself. That needs to be true.

10. This Means War
$2.1M / $50.5M
A storm rages inside me. Is it worth Tom Hardy getting more work if it also means that McG gets to continue making movies?

Dropped Out: The Vow, Silent House

And if you want to know what I'm watching, listening to, playing , and reading you can follow my tumblr account!
© 2011 Richard James Thorne
Posted by Rich Thorne at 9:01 AM