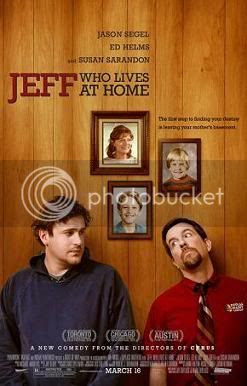 Mark and Jay Duplass, brothers behind Cyrus, Baghead, and The Puffy Chair, continue to expand the definition of mumblecore with their latest film Jeff, Who Lives At Home. While it would be easy to describe this movie as a tale of a slacker who attempts to find his place in the world, what the Duplass brothers do with this film is so much more expansive because of the way they build upon the concept of a genre they helped popularize. Existing between the realms of drama and comedy their latest creation is more concerned with the humanity than it is with laughs, but it also willingly paints with the broadest of strokes in order to further reach for the universal. But by doing this I couldn't help but wonder if the shift of focus from the nuanced examination of relationships that have defined previous Duplass brothers films would be needlessly sacrificed for a more sprawling affair.

The conclusion that I reached is not simple, but for me I find it to be satisfactory. It's difficult to call a film that's only about 80 minutes long sprawling, and by holding on to the quick cuts and zooms that define both Duplass and mumblecore style the film brings us close to the titular Jeff, played by a stunningly restrained Jason Segel in a fantastic turn, and his brother Pat (Ed Helms) to create a level of humanism in their strained relationship. But as I watched the film it always seemed as if I was watching talking pieces rather than humans. In Cyrus the characters were at times cartoonish, but here I'm not even entirely sure if I would call Jeff and Pat characters, a surprising thought in a Duplass brothers film.

Part of this results from the film's decision to practically negate the plot within the opening five minutes. By pairing a quote from Jeff with a brief, verbalized, monologue from him where he explains his affection for the film Signs we are practically told that events will meander, but they will build toward an encounter that, while seemingly random, has astounding weight. So don't worry about the messy parts, and here's the theme I should be thinking about. I tend to have an aversion to being beat over the head with theme, but the way the movie opens up (in more ways than one) a the very start is admirable if only because the events that unfold are still surprisingly entertaining. Likely this is the result of Segel and Helms, both of whom have great chemistry with one another even if Helms isn't given much to do outside of his usual bag of tricks. The (by this time, least) surprising performance comes from Judy Greer who ignites the screen in her few appearances. The film kind of just clips along, until a point where it begins growing at a seemingly uncontrollable pace.

Uncontrollable may actually not be the best word, because as the movie goes on it also becomes apparent that the Duplass brothers are in complete control even as their characters hurtle towards inevitability. Once famous American playwright Tennessee Williams was asked which of his plays was his favorite, and he replied that he felt Cat on a Hot Tin Roof was his best because the entire play followed traditional dramatic structure by taking place in a single day with minimal time breaks between major acts. The Duplass brothers employ a similar strategy here to surprising effect. Evoking this dramatic structure gives reason to their use of  individuals who resemble humans but are used to more overtly represent universal conflicts and struggles, and helps cover up for the use of overt plot/theme device character like the mother played by Susan Sarandon. Having the film act more like a traditional play allows the Duplass brothers to evoke specific moments of pathos, one of their greatest strengths, while operating in a newer realm where the universality in theme is just as important as these relationships. What should create a sense of tension actual becomes an invitation for introspection.

Though this tension does occasionally undercut the film, at times the movie asks for specific humanistic cues to evoke emotion that are hollow and unearned because these characters are (purposefully) underdeveloped, and in reality the themes that are explored aren't revolutionary. But we don't really listen to stories in order to see the wheel reinvented, we listen to reaffirm our understanding of self and the world. While Jeff, Who Lives At Home is by the numbers, it does reaffirm, while fitting nicely in to the Duplass brothers developing filmography.

This film isn't all that funny, but there was one line that Segel delivers involving handjobs that had me in hysterics. Just a perfect delivery.

Though I don't use .5 ratings, this is a film that likely is the quintessential 3.5/5 film. I rounded down in this case because of some structural problems (the mother character mostly being worthless, Pat never acting as enough of an opposing force to Jeff, etc). Still a film well worth your time though, and one that I have a hard time seeing anyone disliking. Part of me was probably comparing it to Cyrus too much, which worked much better as both comedy and drama for me than this movie.

Those quick cuts and zooms that the Duplass brothers made famous are much more restrained here for a large portion of time. They could quickly turn in to self parodying  and jarring techniques as the brothers veer closer to mainstream films, but I still find them endearing.

And if you want to know what I'm watching, listening to, playing , and reading you can follow my tumblr account!
© 2011 Richard James Thorne
Posted by Rich Thorne at 11:20 AM