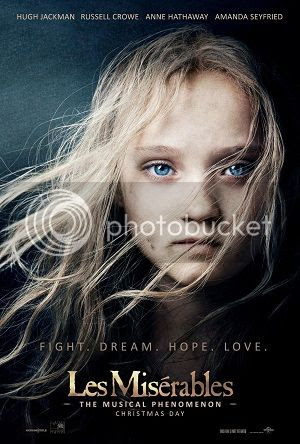 The musical has kind of been on life support for a while. Yeah, I hear it is thriving in Bollywood to an extent, but even Disney has strayed from full on musicals in favor of more 'traditional' narratives in recent years. Sure every so often one may pop up (though it does kind of feel like forever since Nine hit the scene as the last major musical), but none seem to have come with the same type of fanfare or excitement attached to Tom Hooper's adaptation of Les Misérables. As one of the most beloved musicals of all time (or so I'm told), the Academy Award winning best director attempts to bring a bombastic sense of this sprawling tale of injustice and revolution to the big screen. Yet, following up the middling The Damned United and the irritating The King's Speech with such revered material leaves me wondering if Hooper has bitten off more than he can chew.

It becomes, almost instantly, apparent that Hooper can very much bring the bombast to the screen without actually knowing what to do with it once it is there. It's kind of this great exercise in confusion. Chronicling the tale of Jean Valjean (Hugh Jackman in a solid performance that kind of makes one feel bad that he's known to most as Wolverine) from his last days serving lawman Javert (Russell Crowe giving a laughable turn as this kind of tortured extension of injustice) to the years he spends on the run attempting to show the world that men can change and the the legal system is pretty boned because he just stole bread to help his starving nephew. This unravels against the backdrop of the second French Revolution which creates some commentary about rich and poor divides.

But what is a musical without its songs? I had little to no exposure to the soundtrack prior to entering, and even only hours after leaving most of them have faded from my memory. In fact the only one to have any sort of lasting impact was the Hathaway performed "I Dreamed A Dream" and that has more to do with the numerous times I've heard it over the trailer before other films than it has to do with how it manifests in the film. While I haven't spent too much time coming out of musicals in recent memory, I still fondly remember my first time with Sweeney Todd or the initial listen I gave to the soundtrack for The Book of Mormon. Even if I didn't fall in love with every song, I found myself drawn to a couple that made the idea of listening to them all again rather appealing. I'm not sure that's the case here. I won't be listening to this on Spotify, let alone putting the soundtrack on my iPod. The songs do contribute to representing the characters's thoughts and telling the story, which doesn't make them feel jarring (I don't care if musicals are handled like West Side Story or Chicago as long as there's an internal consistency, which there is here), but that sort of feel like a low bar to judge quality. 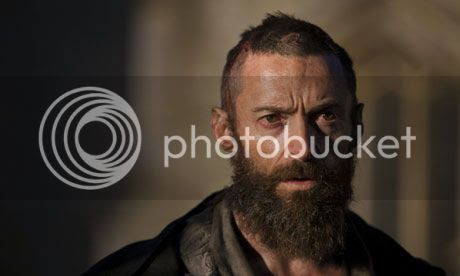 All the themes seem about as herky jerky as Hooper's direction, at times echoing the incoherence of a Christopher Nolan film including all the dark alleys and gruff vocals, with excessive closeups that attempt to inject some emotional resonance in to the picture. The film grapples, at times, with the notion of injustice in the legal system, but it seems so caught up in moving from plot point to plot point that most of the big (and most interesting) ideas aren't given enough time to grow. Instead, what supplants it is an inexplicable romance subplot involving Cosette (Amanda Seyfried, who is mostly wasted), Valjean's adopted kind of daughter that he takes care of after an ex-worker in one of his factories (Anne Hathaway's sobbing Fantine) dies, and Marius (Eddie Redmayne). I have no problems with romance plots in general, but the implementation here makes it feel so inconsequential to the rest of the film.

And when the rest of the film feels inconsequential as well that's kind of saying something. The breakneck pace at which the plot moves, kind of surprising since the film certainly feels long, made it difficult to latch on to any of these characters. The movie feels as if it lacks any sort of stakes, even for Valjean who is constantly damned by himself just as much as he is by the corrupt system which he inhabits. Perhaps the most interesting part of the entire film (THERE ARE GOING TO BE SPOILERS FROM HERE ON OUT SO I GUESS STOP READING IF YOU CARE ABOUT THAT STUFF EVEN THOUGH ITS KIND OF IRRELEVANT) is the implication that, after Valjean dies and joins the rest of the revolutionaries, the only true way for these characters to find a sense of justice and freedom is contained to a heaven rather than in the corrupt real world. It adds this disturbing subtext to what could be a pleasant experience, though it is largely left unexplored which remains a bummer.

Actually bummer might be the best way to describe Les Mis as a whole. And, unlike other films that I kind of love for being a bummer, this one is a bummer for all the wrong reasons. Whether it's Hooper's ineffective direction, the emotional manipulation, or the lack of balance between the minimalism and maximalism there are any number of reasons why Hooper's latest feature is one of the year's least enjoyable and fulfilling experiences. Whether or not this is a worthy adaptation of the musical or not is mostly irrelevant, it is simply a poor film.

I didn't mention in the review proper, but perhaps the best part of the film was the appearance of Sacha Baron Cohen and Helena Bonham Carter in this quasi-Sweeney Todd reunion. I know that Tasha Robinson of the AV Club mentions that she doesn't care for SBC's French accent in his song, but given the character (one mostly there for comedic relief, and one that clearly is attempting to present himself to others as higher despite the audience being able to realize that he's probably the lowest character on screen) I feel he works well in the role. Sadly the scenes and how the couple function in the film are much less successful, so there's that.

There are a couple of beautiful shots in the light, but for the most part the cinematography directly takes away from the quality of the film as a whole. I'm not even sure if it has to do with so much of the film taking place at night. The lighting is offputting and obscures without purpose.

It's kind of strange that Samantha Barks isn't really getting much attention, since she probably gives the best performance.

Maybe it's important to state that I have neither read Hugo's novel, nor have I seen the musical, but I really don't think that's a prerequisite to potentially enjoying or critiquing the film. So there's that. Also this would be a *.5 if I used .5's in my ratings.

And if you want to know what I'm watching, listening to, playing , and reading you can follow my tumblr account!
© 2012 Richard James Thorne
Posted by Rich Thorne at 2:53 PM