Living On A Lighted Stage Approaches The Unreal 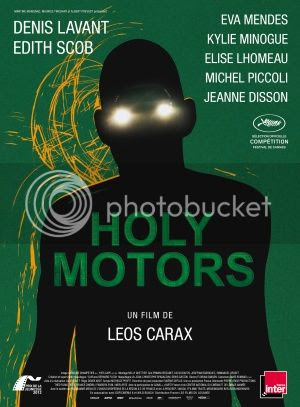 Continuing my paltry coverage of the Philadelphia Film Festival, I want to take a bit of time to write about one of the craziest theatrical experiences I have had in quite some time. Specifically, it all happened when I sat down to watch Holy Motors, the audacious new (mostly French) film from Leos Carax. Much like Beyond The Hills this one generated heaps of positive buzz at Cannes earlier in the year despite not coming away with any of the major awards. But unlike the relatively straightforward, though still complex, Beyond The Hills, one cannot as easily describe all the intricacies and surprises on display in Holy Motors, and I wouldn't want it any other way.

Though scarce on details, if one was to describe what Holy Motors is 'about' it could quite easily be said that it's a film that follows an actor during a day where he plays many different roles. Of course said actor, Mr. Oscar (played by Denis Lavant, who acts as a screen presence right up there with Joaquin Phoenix in The Master for the year's best actor thus far), actually doesn't seem to visit sets and the only hint of a visible camera is the awareness that we ourselves are watching a film and something is being used to record the man we are watching.

And it's in that murky area that the brilliance of Carax's film begins to fully emerge. Marked by a visual style that is a dynamic as the performances of Mr. Oscar himself, Carax creates this constantly shifting world where literally anything becomes possible. It is through this that the film's comedic sensibilities are firmly established, but to label the film a comedy is a huge injustice to the sweeping emotional panorama on display.  There are musical sequences, a lengthy scene of motion-capture, and about three different concluding points that range from hysterical to tragic all at the same time.

What grounds the film is Mr. Oscar's desperate search for a sense of belonging, a need for a home that seems to be as elusive and outdated as many of the technologies strewn about. Mr. Oscar is always changing, so much so that we are never sure we have even seen the real him, if there even is such a thing anymore. However, through a number of brilliant soundtrack cues and constant reminders of a domestic sphere Carax underscores the entire film with a certain tragedy. It's a marvelous balancing act that requires a delicate approach to make sure that nothing ever feels out of place without a reason. There's a certain open-ended quality to the way themes manifest in the film, and it's because of all the symbols that Carax makes use of that the movie elevates itself above an exercise in style. Even the title, which seems fairly nondescript at first, even comes together at the end to remind us of this idealized world that, even in a constantly changing environment, will always retain its splendor and glory even if it becomes increasingly difficult to replicate.

And so this meta-textual look at filmmaking, this hopefully tragic tale of a man in search for respite, stands as one of the most invigorating and engaging works of the year. The benefits of the theatrical experience cannot be overstated, but given how surprisingly resonant this film is emotionally and how thematically intriguing it becomes the more it goes on and the farther away you get from the film this is definitely a title that demands to be seen. Such an uninterrupted vision, such daring work, all oozing from the very core of Holy Motors.

I didn't mention her at all, but Mr. Oscar's limo driver played by Edith Scob is also pretty fantastic. There's a cool part with Eva Mendes too, but she doesn't have much to do outside of a scene or two.

I could get in to a lot more about the film, but like many others it would benefit from the surprise of actually watching it. And for those around the Philadelphia area you still have a chance to catch Holy Motors at the Philadelphia Film Festival on Friday October 26th at 7:15!

And if you want to know what I'm watching, listening to, playing , and reading you can follow my tumblr account!
© 2012 Richard James Thorne
Posted by Rich Thorne at 2:21 PM