The Hounds Are Baying, I Don't Remember There Being Any Hounds Around Here 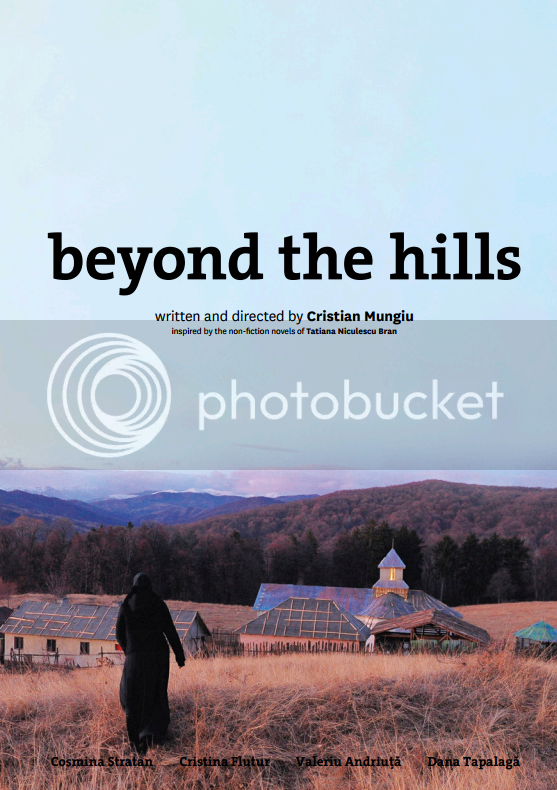 On Saturday I was able to have my first ever experience at the Philadelphia Film Festival, and even though I only saw two films out of the many offered I definitely picked two high quality movies that I can't wait to write about. The first film on my docket was Beyond The Hills, the latest from Romanian filmmaker Cristian Mungiu (4 Months, 3 Weeks, 2 Days). I knew relatively little about this film going in aside from its director, but after poking around the internet after the screening I noticed that it actually took home the Best Screenplay prize at Cannes this year along with a shared Best Actress award for its two leads. But aside from that I had little idea of what to expect, and as usual that tends to be a strength.

The film primarily revolves around the central relationship between Voichita (Cosmina Stratan) and Alina (Cristina Flutur) as the two attempt to reconcile their friendship and current lives with their past. Voichita has, in their time apart, joined a primitive monastery while Alina traveled to Germany. Much of the conflict between the two comes from their past romantic relationship. Alina still seems quite devoted to Voichita while the church has taken the place for Voichita. Alina attempts to exist within the monastery, but she is constantly at odds with the Father and the film develops from there.

What strikes me most about both the films from Mungiu that I have seen is the way he is able to take these moments of absence and inject them with a sense of tension. In 4 Months, 3 Weeks, 2 Days the prime example of this (and that film's best scene) came when one of the two girls was stranded at a dinner with her boyfriend, while a similar device is used a couple of times here as well. There's a striking use of frame composition, but the other elements of mise-en-scene on display, including where characters are positioned in relation to their position on screen and in the world on display, are particularly important to creating this tension. However, Beyond The Hills is also a much more visceral (disturbing, even at certain parts) film, and the tension is at times as defined by action as it is by absence. There's also a surprising amount of humorous disconnect found in a couple of scenes.

But I found the thematic heft of the film to be the most engaging part of what is a highly accomplished film. Following in the footsteps of 4 Months, 3 Weeks, 2 Days what Mungiu examines and reveals is the way societal forces attempt to exert control over the female body. The feminine body becomes, at points, literally a battle ground. Though the dynamics and the way it manifests itself are drastically different, in a way this film reminded me of the way Jeanne Dielman approaches the byproducts of patriarchy. It's all pretty disturbing, but also a great feminist work because of the way it pushes these injustices to the forefront of a viewer's mind.

Though I need to better familiarize myself with the Romanian filmmaker's work, after the two films of his I have seen I can confidently say that Mungiu is a talent that I will continue to monitor long in to the future. The Cannes awards for screenplay and actresses are well deserved, specifically because of how much the film's subtext creates a complex final product that stands alongside the best films I have seen this year.

I'm not sure what kind of release this one will get, presumably it will hit Netflix Instant at some point and will potentially make it to more theaters if an Oscar campaign builds, but check it out if you get the chance. By the time this posts it will have screened both times at PFF, so hopefully it gets a larger release if it makes the Oscar cut.

And if you want to know what I'm watching, listening to, playing , and reading you can follow my tumblr account!
© 2012 Richard James Thorne
Posted by Rich Thorne at 4:20 PM