Okay! Took us a little while to get back here after running through the TV shows (and still having audio troubles on this new laptop that I need to figure out, which has sadly delayed attempts at podcasting), but we are back! And we're here to talk a little about video games. We had new consoles, the beginning of the 3DS Golden Age (or not, who can say?), and a bunch of previous generation software. So what ended up being the best of the best in this wild year? Let's find out on this edition of the NAMCO High memorial list because that game came out so late in the year! 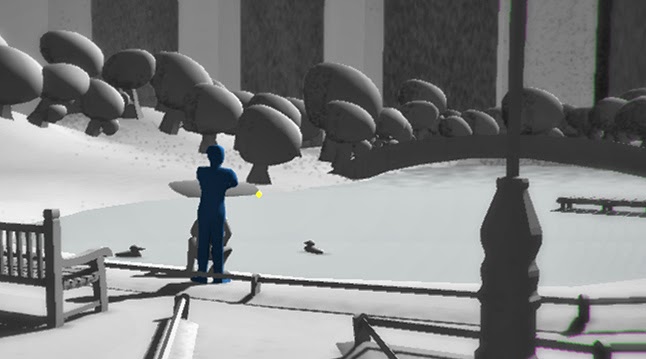 While 2013 wasn't the banner year for independent game development that was 2012, there were a number of gems scattered about the landscape. Mechanically what Fragments Of Him does is little more than a point and click hidden object game, but the true power of the game is found in the narrator as he deals with the loss of a lover. As far as emotional experiences in games is concerned, I have had very few that rival what is achieved with this short browser based game. Definitely worth the time, so stop reading this for thirty minutes and give it a play. 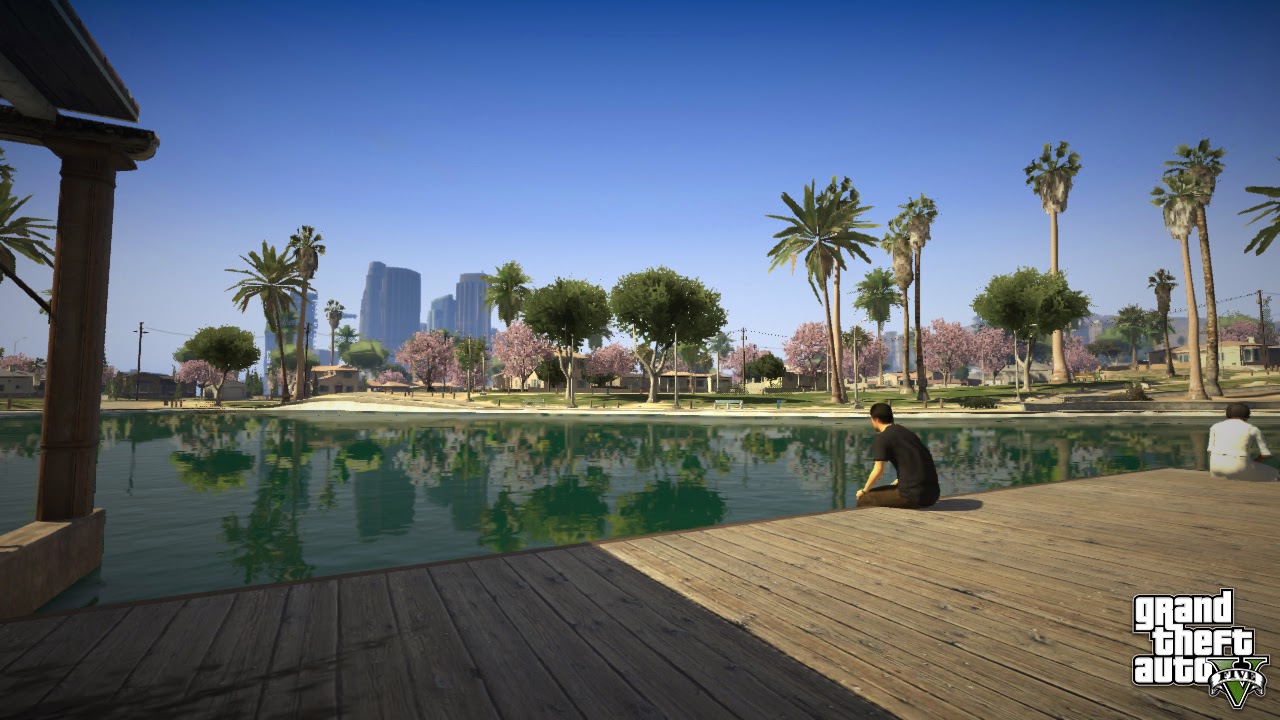 Rockstar's return to the GTA Universe resulted in their most densely populated game yet, and one that successfully pulled off swapping between characters. Sure radio stations repeated too much, Franklin and Trevor had stories that ended up underdeveloped especially in comparison to Michael, the gunplay was still basic, and I wish Lamar was a main character, but the world they created was so damned impressive that even basic mission structure (outside of exciting heists) were masked. It wasn't the focused masterstroke that was Bully or Red Dead Redemption, but on the whole GTA V does more than enough right to earn its spot as one of the year's best titles. I feel off of the 2K basketball series last year because, in a microtransation driven world, the way MyPlayer points were handled was pretty fucked early on in your career especially in comparison to 2K12. While the entire package here is good, it's the MyPlayer mode where I spend most of my time, so taking the next-gen versions and integrating an actual narrative in there (along with a more generous distribution of MyPlayer points) was enough to draw me back in. And now Sarunas "Garbage Man" Babcock is ready for super-stardom, at least until next year's version. 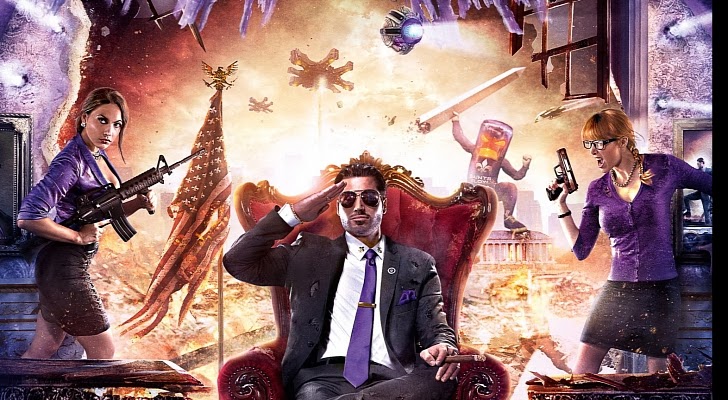 Following up the insane majesty that was Saints Row: The Third had to be tough, so what did Ignition do? Double down on the crazy! And for the most part that worked, even if some moments felt more like trotting out SR3's Greatest Hits rather than SR4 taking on its own identity. But then you have the crazy navigation that makes vehicles irrelevant, some fantastic Mass Effect jabs, and a radio station where sections of Pride and Prejudice are just read. What more could any game need? 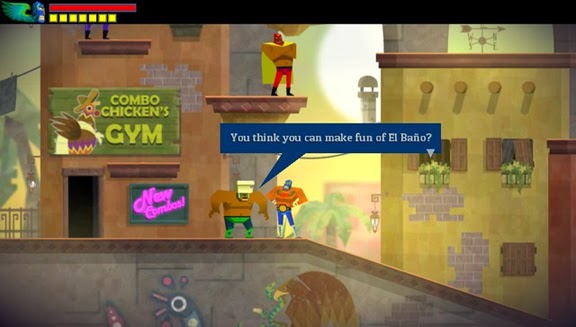 The disgusting genre title that is "Metroidvania" is something that video games ought to replace; however, the types of games in said genre need to never go away. It would be easy to dismiss this game because of the shameless way it tosses in internet references and memes in its Mexican funhouse of a world, but when the mechanics are as rock solid as they are here, when side quests are so engaging, when you are physically just playing the damned thing it's all pretty much fantastic, even if it enables Grumpy Cat sometimes. 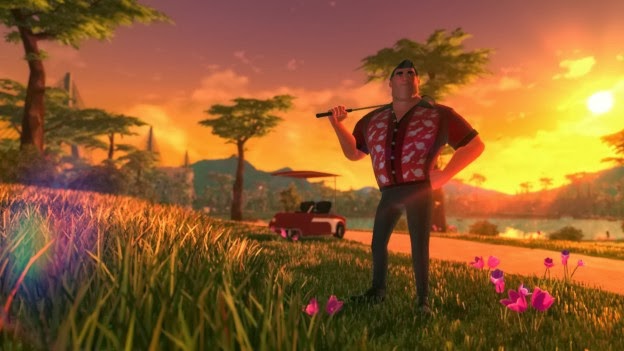 I don't like golf, I don't like golf sims, but damn do I love Zoe Mode's Xbox One downloadable launch title Powerstar Golf. Drawing more than a little bit of influence from the Hot Shots Golf series, this game differentiates itself from the competition (that is to say any golf sim, not just the cartoonish ones) with the deep, balanced leveling mechanics, loot collection, and inventive (though not silly enough to interfere with the golfing itself) courses. It's not quite this year's Spelunky in the sense that I can just play it whenever for short or long bursts, but it comes close...even if putting is way too hard. 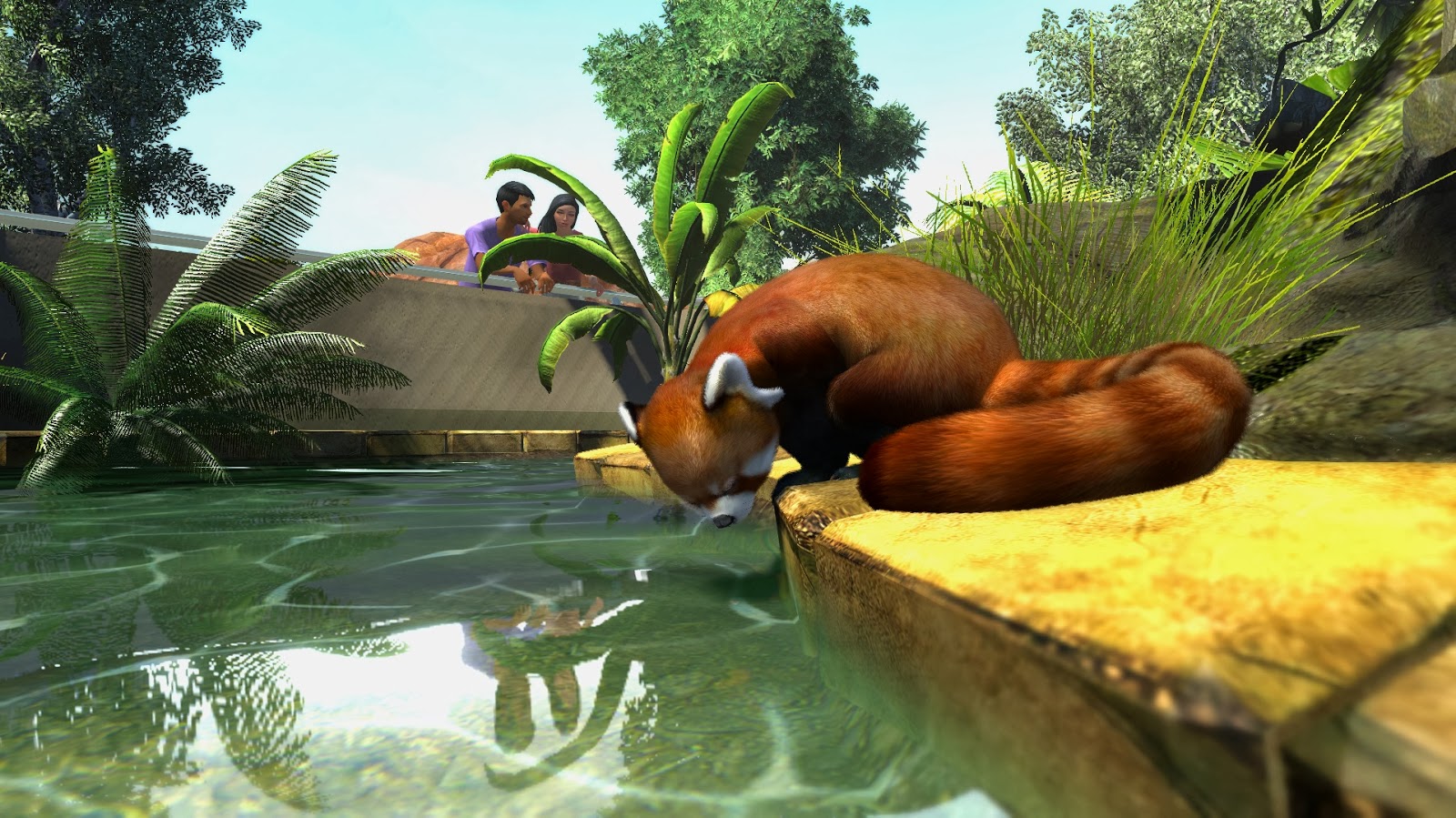 The original Zoo Tycoon for the PC is one of my most favorite tycoon games of all time, and while the transition to the Xbox One stripping away some of the more nuanced aspects of the PC original does not allow for quite as much depth in terms of zoo construction, there's also much more to this game than the wonderful fun that comes from jumping in front of the Kinect to make faces at chimps. With a rich, and occasionally challenging, campaign mode featuring a ton of different zoo scenarios, Zoo Tycoon rises well above the ranks of simple kids game and finds itself in the same realm as something like a Viva Pinata except with even more structure. Add in the customization of its freeplay and challenge modes, and you have what is likely the surprising best next-gen launch title. 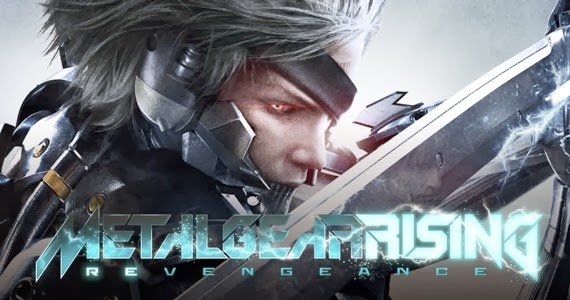 Scared. That's the word I would use to describe myself as I went in to this kind of MGS spinoff but I guess kind of core entry in to the main series developed by character action experts (and masters of crazy ala Bayonetta) Platinum Games in partnership with Hideo "The Master" Kojima's team. Existing in development Hell for long enough to be concerned, I'm glad to say that at the end of everything the final product turned out both much better than I ever imagined, but also a worthy bearer of the Metal Gear name.

The way this game creates a sense of scale is staggering, not seen quite this way since the first couple of God of War games. This cyborg Raiden chapter takes core Metal Gear ideas and fleshes them out in this absolutely insane narrative that culminates in one of the best final acts of any big studio game in recent memory. It's magical, plain and simple. 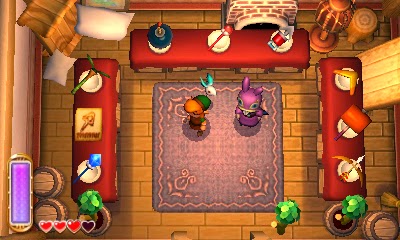 2. The Legend Of Zelda: A Link Between Worlds

Years ago on this very blog I wrote an article calling out the Zelda franchise as representative of everything that was wrong with Nintendo. A perceptive article that has proven more and more correct over the years (I am sorry for the self indulgence, but I still feel like I really hit on something with that post), I went in to this latest offering with apprehension as it literally seemed like the epitome of what I wrote about. The recent portable Zelda games were not fun, nor were their console counterparts, really. And despite liking A Link To The Past there are a number of other top down Zelda games I enjoy much more. But damn does this game ignite a spark of long overdue innovation that I hope Nintendo takes to heart in the future.

Opening up all the dungeons, items, and fast travel so early in the game gives enough freedom to the player that it injects the game with so much life. The innovation still technically isn't enough, but from Nintendo I'll take what I can get. From gameplay to level design to music even down to narrative (though, I mean, Link comes so close to speaking, just do it already Nintendo!), A Link Between Worlds is a marvel. 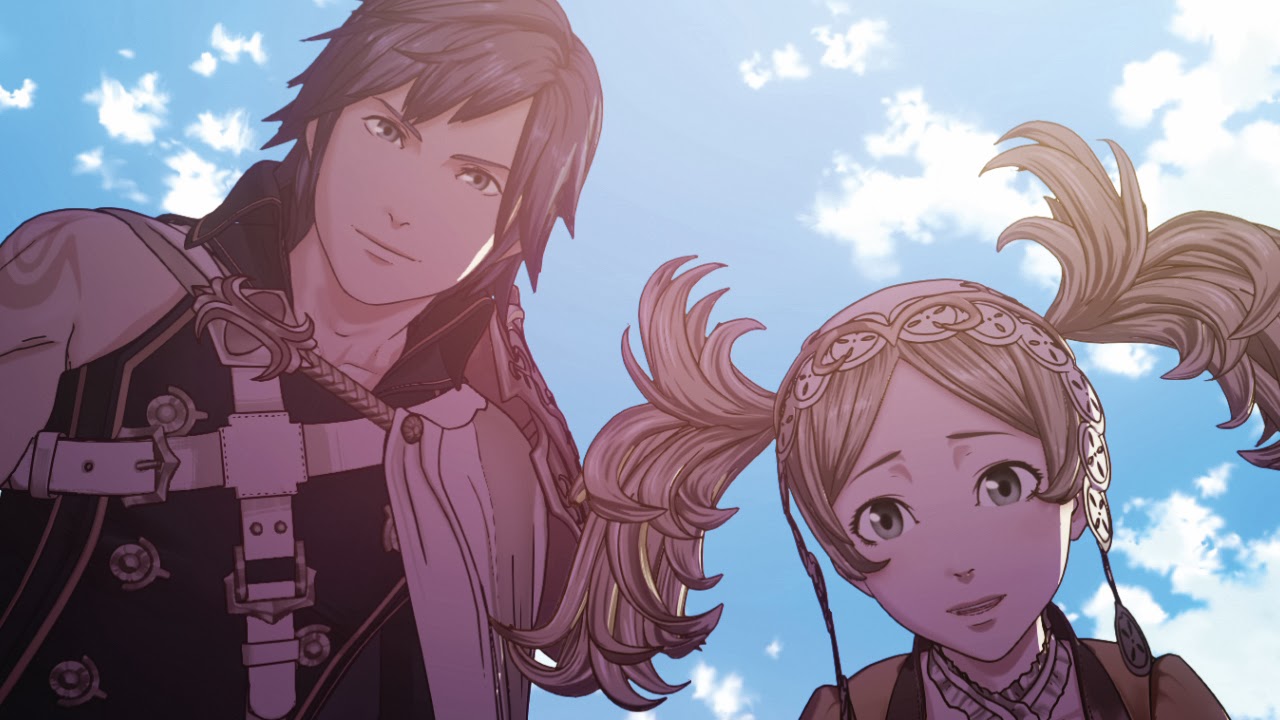 There are games that sell systems. In 2012 it was the promise of an upcoming Fire Emblem that made me seriously consider getting a 3DS. I have always enjoyed the series, its use of permanent death is a great gameplay wrinkle that separates it from other turn based handheld strategy stalwarts like Final Fantasy Tactics Advance and Advance Wars that these titles are always worth playing even if those other two series were always much more enjoyable and complex.

However, with Fire Emblem Awakening that all changes. Pairing up characters allows the fantastic translation work to shine right alongside the fulfilling combat. It works together to create people I care about, and the way that these pairs and romantic coupling eventually work in to the narrative itself creates an incredibly replayable adventure. There's no game I played longer, no game I enjoyed more, and no game that demands you buy a system and experience it from 2013 than Fire Emblem Awakening. Truly a great year for the 3DS.

And here's a ranked list of all the games I ended up playing from the previous year.

Agree or disagree with the choices? Anything I missed (the answer here is "yes" as I didn't have a chance to play Ryse, Killzone: Shadowfall, Rogue Legacy, NAMCO High, Gone Home, The Stanley Parable, or Assassin's Creed 4)? Let me know below in the comments! And keep an eye out soon for a list of the best songs from 2013!

And if you want to know what I'm watching, listening to, playing , and reading you can follow my tumblr account!
© 2014 Richard James Thorne
Posted by Rich Thorne at 10:21 AM