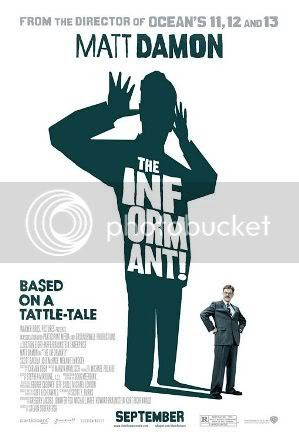 The Informant! (Soderbergh, 2009)
So Steven Soderbergh has already made one of the year's most interesting films in the form of The Girlfriend Experience, and now he has returned with a more mainstream entry in his yarn about Mark Whitacre, famous corporate whistle blower. Starring Matt Damon as the lead, my excitement for the film was fairly high since, recently, I have been a fan of both Damon's and Soderbergh's work. However, the trailer told me that it the film would visually be in a style similar to his underwhelming Out of Sight. So I went in with little knowledge about the story, slightly hesitant that I would be in for something fairly light and comedic, and hoping to see one of the year's best films. In many ways none of those thoughts remained constant for very long after the film started rolling across the screen. 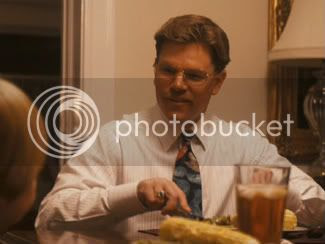 The Informant! is in no way a bad film, but these is certainly something off-putting about the whole affair, though I have to be slightly wary that, at least to an extent, much of that style is by Soderbergh's own craft. The score and style, both carefree and highly polished, are completely at odds with the incredibly dark overtones in the film's narrative such as the severity of the price fixing and, ultimately, the motivations for the Whitacre character. Unsettling is likely a more proper word used to describe my time with the film as even the casting choices are apparently meant to be at odds with viewer expectations. Matt Damon, a man I have known mostly as a 'serious' actor, easily slides into a comedic role while known comedians like Joel McHale and Tony Hale are given so little comedy to work with during the entire film. Perhaps Soderbergh wants the audience to make note of the foolish business practices and government actions through the supporting cast while still reminding the audience of the sincerity of the Whitacre character despite the surface comedy. Whatever his intention, he is clearly toying with preconceived ideas, which he also did in Out of Sight to similar success. 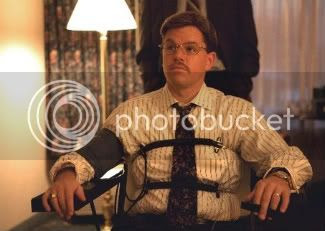 So I suppose the question is does the comedy work and, ultimately, is does the film succeed as a unique telling of this fascinating tale? The answer is not incredibly simple. While the comedy is usually not overt, Damon brings everything he can muster to the character and the dialogue, while a bit overt in some places and rather subtle in others, is simply superb. However, the film does not really have many big laughs, but the film does not really seem to be a straight comedy in the same sense that something like I Love You, Man attempts to exist as a comedy. The more apt comparison, as far as I am concerned, is to Observe and Report. While the audience may laugh with Damon, or perhaps even at him, I think the comedy, to an extent, comes to the hypocritical nature of man in addition to the constant idea to plan and progress. The film, in many ways, is about Whitacre's unraveling, but also about simply presenting the good and the bad, the serious and the comedic, aspects of the man. Nothing in the film is a definite, and I think Soderbergh does a nice job of presenting that idea through the portrayal of the Whitacre character and the constantly conflicting styles. 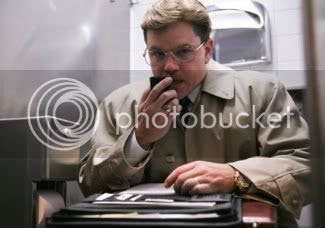 Ultimately, The Informant! is another interesting experiment from a director who, like one of my personal favorite filmmakers, Gus Van Sant, has a knack for bringing his own definitive perspective to even the most mainstream and conventional of films. Soderbergh does not hit this one out of the park in the same way that he does with The Girlfriend Experience, but he crafts a film that is a fun enough ride the first time through and probably will benefit from a second viewing. I have compared the film to Out of Sight throughout most of this review, and I will continue to do so here. Like Out of Sight, Soderbergh takes an interesting cast, anchors it with a fantastic lead performance, throws in an engaging story, adds a dose of flashy camera moves, a spiffy soundtrack, and toys with audience expectations to make an entertaining product that, like Out of Sight, does little more than serve as a mildly amusing way to spend a couple hours.

Also I am on the old Twitter thing so I guess you can follow me at twitter.com/FLYmeatwad.
Posted by Rich Thorne at 6:43 PM