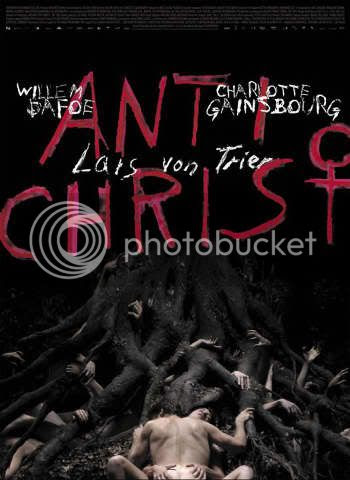 Antichrist (Von Trier, 2009)
Word out of Cannes this year was that Lars Von Trier's latest film, Antichrist, was either one of the greatest things to grace a screen in recent memory or one of the most horrible, disgusting, worthless pieces of shit to ever masquerade as art. Now I knew little of this film when the buzz started building at the festival, but as the US release date started approaching I saw a trailer, heard that a video game tie in is planned, and learned basically He and She go back to Eden for something or another. Also, people have sex on a tree, potentially a tree made of people. I have to imagine, at least partially, that Terrence Malick would be proud of a more direct representation of his flora fetish. Either way, I still did not know entirely what to expect as the innocently chaotic title was etched across the screen in such a diabolical yet childlike fashion. All I knew was that I should be excited, and then it all starts, and I am left questioning if this is, in fact, the best place for me to begin delving into Von Trier's filmography. 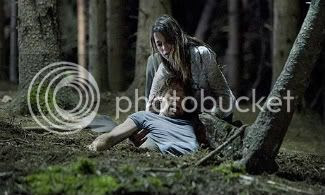 Well, let us answer that question through a more thorough look at Antichrist, or at least what I am able to surmise with only a single viewing and a mind that still is attempting to process all the symbols and themes that Lars is compelled to toss my way over the relatively lean 110 minute run. Through a wonderfully disciplined style, possessing the occasional whimsy of Alice in Wonderland mixed with the stark realism of a film more akin to Elephant, Von Trier crafts what is, without a doubt, one of the most visually beautiful films in a year that is packed with gorgeous cinema. Whether wandering through the woods and back to Eden, or remaining captive in the close quarters of the run down shack, the film blends the real and the surreal fantastically, which further highlights the Biblical ideas that run throughout without ever directly weaving the real world, theoretically 'our' world, together with the perceived, or perhaps symbolic is the better term as the religious aspects certainly do not appear to be presented as factual. It may be overly cliche to say that the filmmaker is a artist whose canvas is his film, but Von Trier has so many sequences in this film that just stand out as portrait~esque that the comparison is more than relevant. And then to have such sequences placed alongside the sex scenes, it just creates a magical juxtaposition, given the presentation of sex throughout the latter part of the film. 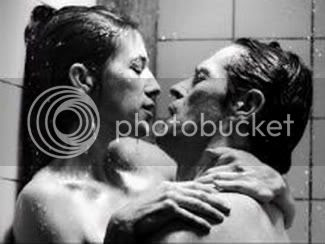 Speaking of sex, it seems that there is a good deal going on here, but it all serves a greater purpose and is really not as plentiful as is to be expected given how much attention I am drawing to the scenes. I suppose in many ways the film is about, at least to an extent, the evils of sex, or pleasure in general. Dafoe's character advises against sex with his wife during her mental healing, it may partially be to blame for the initial tragedy, and Gainsbourg's behaviour in the final chapter can likely support a reading of the evils of sex. Yet Von Trier does not make things that simple at all, he adds in the whole portion about acorns to show the preciousness of life, he directly frames sex as beautiful during at least three portions throughout the film, and he does not let Dafoe off in the least, in fact he may even be condemning Dafoe. To prevent any further rambling, for now, I'm going to completely ignore transitional rules and jump right into performance. Dafoe is solid, and perhaps he has the tougher task given that he is expected to mostly be the serious and straight character, but what Charlotte Gainsbourg does as the She character is phenomenal. I liked her role in I'm Not There, but in Antichrist she does not only turn in a performance worthy of an Oscar, she displays one of the greatest performances of all time. The strength is not found in how much she has to do so much as it is found in the emotion that she brings to the role. Given the film's ambiguous nature she has to play evil and righteous, whore and saint, sane and insane, and still convey the grief that anyone in her situation is expected to possess. Praise upon praise can be given to Gainsbourg for her performance in Antichrist, but the most effective summation is best kept simple: she brings an insane complexity to a nameless character, Gainsbourg is fantastic. 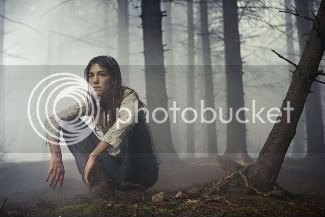 Aside from performances, the chapter structure of the film is interesting as well. The breaks help keep the pacing pitch perfect and they all tie together into a mostly cohesive whole, retaining meaning as individual portions and as a collective. They chronicle the degradation of everything as well, and I do not mean to be vague by using the term 'everything,' but I do feel that it is the most applicable word in this case. Either way, let's toss up a spoiler warning now for the parts that seem to have audiences all riled up. Likely it will not mean too much out of context, so you should be safe reading, but if you do not want some specific actions revealed then I guess continue to the final paragraph for my closing thoughts. Antichrist was, despite causing who knows how many people to scream and faint and whatever else at Cannes, relatively tame throughout. Sure the film is occasionally overt in the way sex is handled and Gainsbourg has a scene where she walks around completely topless, and then there's that doe with the miscarried deer hanging out of it, but the only parts that I had any trouble watching, and even these are watchable as they are not very long, is when Gainsbourg smashes Dafoe's penis in with something, though that is concealed. However, the follow up where she gives him a hand job so he ejaculates blood instead of semen is slightly unnerving. I was unsettled throughout the whole scene, but I suppose that is to be expected. The other, and likely more unsettling, bit is when Gainsbourg castrates herself by cutting off her clitoris. It's an intense scene, but it serves a purpose and showing the act graphically is necessary to get the full effect, especially when paired with the cut to the deer that immediately follows. So yeah, the film gets unsettling in a few parts, but otherwise I do not understand exactly where the disgust for the film originates. 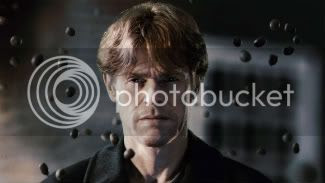 So was this the best place to start with Von Trier? I'm not entirely sure without seeing what else he had worked on, but given the numerous layers, symbols, themes, and ideas that he has going on during this film I have to imagine that it will be tough for his older works to create the same reaction I had toward Antichrist. Antichrist has all the markings of a technically great film, and as far as the extraneous material goes I found myself engaged throughout the entire run, so from an entertainment perspective, and I use the term referring to my mental engagement with the film not any pure bliss of simply watching, it's pretty fantastic as well. Antichrist contains some of the year's best cinematography, likely the year's best performance so far, and more literary and artistic flourishes than just about anything I have seen all year. I need time for it to sit and another viewing to process a good majority of the material properly, so I cannot say if the film is nearly as good as Adventureland, Lymelife, or The Cove just yet, but Antichrist is at least the fourth best film of the year and a truly jarring and rewarding experience.

So I'm also pretty behind in other reviews, which means that my next entry will probably be a short three or four paragraph post covering films that are more happier than Antichrist. On tap for that entry are, at the very least: Away We Go, Tulpan, Sin Nombre, and Anvil! The Story of Anvil!

Also I am on the old Twitter thing so I guess you can follow me at twitter.com/FLYmeatwad.
Posted by Rich Thorne at 5:30 PM