Is It Much Too Much To Ask, Not To Hide Behind The Mask? 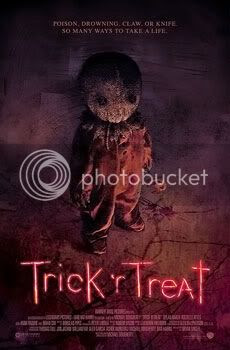 I do not take well to horror films, a problem I hope to rectify this month with my "Keep the Lights On! (Generic Horror Marathon Extravaganza!) Marathon of Monsters, Mayhem, and Mental Provocation Marathon." Unofficially this started with Antichrist, so I guess we can say it has a 2009 theme for now given this entry and the forthcoming Drag Me To Hell one. I'm not into labels...man. And in many ways neither is Trick 'r Treat (boom! What a lead in!), walking a fine line between horror and comedy that few films in recent memory have tread so capably. But let us not confuse this for a film like Shaun of the Dead or a Scary Movie, Trick 'r Treat is definitely a horror film, it just has a good deal more fun with the genre than what I imagine many more recent serious scary movies do, which is probably what makes it such a gateway film for this marathon. It is not necessary scary, it gets slightly formulaic and predictable, but it's still a consistently enjoyable and interesting ride. 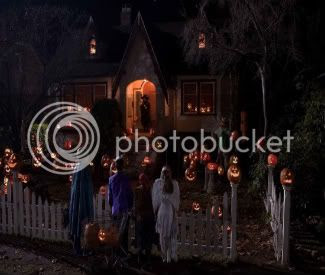 A uniform narrative, at least in the sense that it all does occur in one area on a single night, the film follows four different groups of people on Halloween night. All of the stories flow normally, the cuts are not awkward or anything like that, and they are strung together by the ominous Sam character, a young child with a burlap sack or something similar covering his head. Visually it works wonders and keeps a mysterious figure at the center of what is already a collective of incredibly compelling tales. The performances are nothing incredibly special, I suppose Anna Paquin is the big name but she has never done much for me and she only continues to underwhelm in this film, and the direction did not have me stunned, but the film is edited excellently and really wonderfully paced and constructed, so I have no qualms about the technical aspects of the film at all. In fact, the film has a visual style that practically drips the essence of Halloween. Unlike any film I have ever seen before, and admittedly they are few and far between, no movie conveys all the atmosphere that comes with this time of year. It's absolutely intoxicating in a way that the all time great holiday movies are, and in many ways this film has the substance to exist as a great film even outside of the Halloween time frame. I suppose anyway since it just released and I will have to revisit it in a few months to verify this claim. 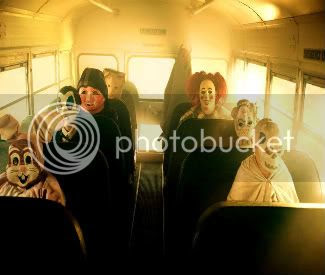 Many aspects of this film really reminded me of some childhood memories magnified and readjusted for a person who, like myself, grew up with these television programs and has missed similar thrills that cater to a more mature demographic. The film captures the thrill of a show like Are You Afraid of the Dark?, the excitement of a movie like Hocus Pocus, and the twists and turns that R.L. Stein delivered in his Goosebumps books and television series. Having the film tap into all of these different entertainment forms, while still making everything modern, occasionally bloody, usually frightening, and R rated in terms of language and what not, makes for a film that not only hits all the right notes in regard to nostalgic purposes, but also acts as a great thrill ride that does not let up at all during the 90 minute or so run. I am honestly stunned that such a high quality film was kept out of theaters and saved for a direct to DVD release, it truly is impressive that such a film could slip through the cracks because it seems to be able to appeal to anyone at all, even a non horror fan like myself. Who does not like to have a little fun? 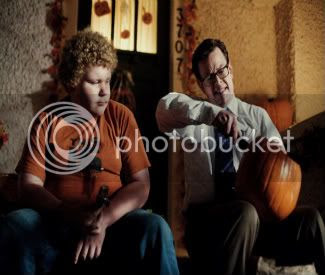 So, unlike Antichrist, Trick 'r Treat is a much more traditional horror film, or at least that is what I have gathered. Plus the way it embraces Halloween is absolutely stunning, though I have probably fawned over that enough over the course of this review. Sure the film is not flawless in the sense that it has insane thematic depth, character development, or even interesting direction, but it also does little to nothing wrong aside from getting a little predictable toward the end. The film is a good time, it's a unique tale, it has a central symbol and idea that are both advanced incredibly well, and it really is a film that should enter the holiday cannon. The film is not scary, so those looking to be frightened should probably look elsewhere, but everyone really should go out of their way to check out this film, preferably before or on Halloween, because it truly is one Hell of a ride.

Also I am on the old Twitter thing so I guess you can follow me at twitter.com/FLYmeatwad.
Posted by Rich Thorne at 7:51 PM