There's More Like Me Where I Come From, So Mark Our Shapes. Go Down To The Netherworld, Plant Grapes 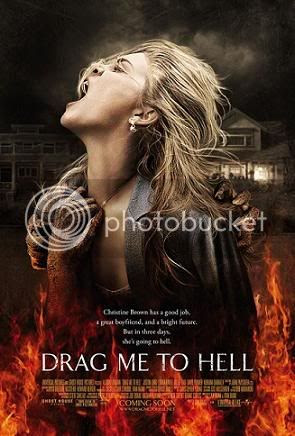 You may notice that this entry jumps around a lot. We can say that, like Raimi, I like to make your mind jump, but that doesn't really work. Essentially, I need a post because this is for the marathon, but I am devoting most of my writing tonight to my Where the Wild Things Are review.

I have not seen the Evil Dead films, I really do not know what other non-Spiderman stuff Raimi has done, but after seeing how terrible Spider Man 2 was I had some reservations going into this film, As this little horror marathon continues I veer away slightly from the fun times found in Trick 'r Treat and actually sit down with a horror film that seems to be designed to scare. Raimi creates tension wonderfully and effectively delivers just about every jump scare he sets out to offer the audience, though that is not to say that the film is engaging simply because it can make the viewer jump. The tale is quite compelling, centering around Alison Lohman's character attempting to rid herself of a curse, and the camera work is damn near top notch. Not to mention that the visual effects are both rather stylized and great at setting the film's tone. 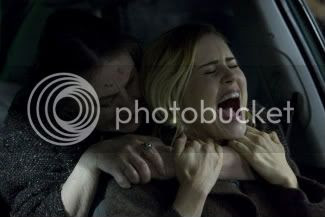 Lohman gives one Hell of a performance in the lead role, in fact I would probably list her as my second favorite actress of the year behind Charlotte in Antichrist and just ahead of Emma Roberts in Hotel for Dogs. As much as I like Justin Long, and that is a good deal, he does not really do all that much with his role. I suppose if there is a surprise it would come in the form of Dileep Rao, but I do not consider him among my favorite supporting performances of the year so it does not appear that he is worth mentioning in any detail. Really the film is Lohman's story and she does everything in her power to make sure that she keeps the viewer engaged. 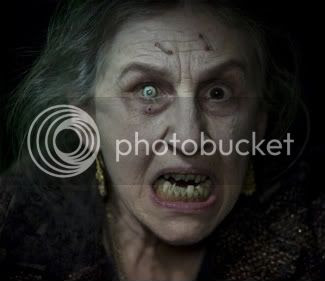 While I am very inexperienced when it comes to horror films, it is also apparent during the film that Raimi is playing with genre convention, which adds a nice layer of underlying humor to the whole affair. There are some scenes that remind me of my time with Poltergeist 3 (no, I don't know why, of all the Poltergeist films, I watched the third one, but whatever), while a number of other scenes had me thinking of what I have heard about other genre staples. The whole dual horror/comedy thing comes to a bursting point when the seance scene occurs though, and what a fantastic scene Raimi has constructed. Without giving away too much information, a goat is involved, as is an old woman and a man servant. The humor is there, but the film never lets the viewer forget the severity of the situation. It's really genius construction, and similar scenes are found scattered throughout the film. 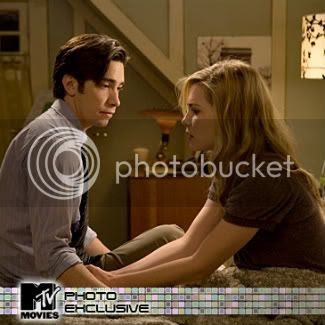 I do not know if I can all Drag Me To Hell one of the best films of the year, and I do not think I can say that it is better than Trick 'r Treat, but Raimi presents me with a film that does get significantly more frightening than Trick 'r Treat while still being at least as entertaining to watch. In hindsight I probably respect the film more than I enjoyed it, but maybe it is the other way around. I'm still not entirely sure. That will likely be a theme tonight as I get to my Wild Things review. I likely would have benefited from knowing more about the genre, but the genius of the film is that is can be enjoyed without all the viewer needing to get all the winks and nods to past films that Raimi has, I believe, inserted here. Anchored by a stellar performance from Lohman, some excellent camera work from Raimi, and a story that is as frightening as it is entertaining, Drag Me To Hell is a blast. I should probably buckle down and watch The Orphanage now though to prepare me for potentially seeing Paranormal Activity in a theater. Maybe.

Also I am on the old Twitter thing so I guess you can follow me at twitter.com/FLYmeatwad.
Posted by Rich Thorne at 5:59 PM