I Hear What You're Not Saying... 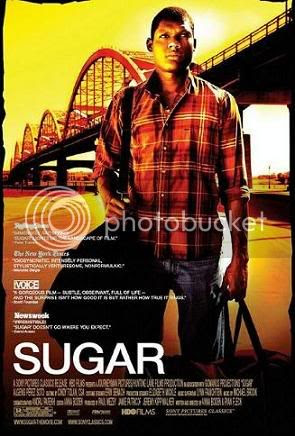 Sugar (Boden and Fleck, 2009)
While I missed the theatrical run of Sugar, I had heard nothing but good things about the baseball biopic focusing on a young Dominican player as he makes the journey over to America for a chance to play in the majors. From the opening preparations to the first minor league game, Sugar chronicles the progression of the titular character wonderfully and humanly, always respecting the game and the player. The rise and (spoilers coming) eventual fall of Sugar is portrayed without embellishment or splendor, the tale is simply told. The film is deceptive in nature though, as one may expect the film to mostly center on Sugar, but a good amount of time is given to the politics of baseball and how these imported players are mostly left by the wayside from the next prospect. The film is marked with a fairly distinctive visual style courtesy of the two directors, and the film is obviously helped by a stunningly strong turn from lead actor Algenis Soto. 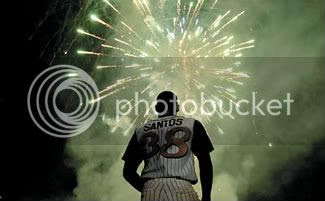 The film does, admittedly drag on a bit in the middle portion, as the story drifts over to New York City for a seemingly meaningless portion. The politics of the game are left out, the language barrier complications that made the start of the film so endearing was mostly forgotten, and Sugar simply did not develop much more as a character. However, the film sets up a devastatingly beautiful ending that packs the viewer so full of hope but forces the audience to also look at reality. Sugar has a number of high points, and as far as entertainment is concerned the film certainly delivers, but as a whole the film does not feel like much more than a fairly standard story mixed with enough interesting concepts to add up to a worthwhile way to spend about two hours. 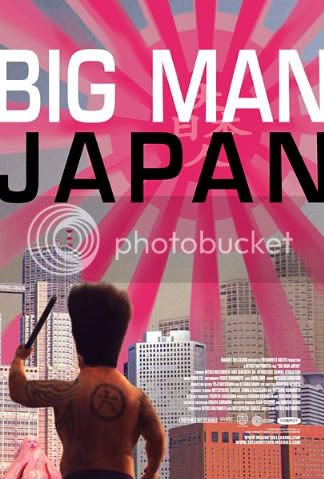 Big Man Japan (Matsumoto, 2009)
Easily presenting one of the most exciting trailers of the year, I have had the desire to watch Big Man Japan for quite a while, so stumbling across the title on Netflix Instant Watch was a welcome discovery. My expectations entering the film were for a rag tag, tongue-in-cheek Power Rangers~esque romp. Perhaps a Japanese take on The Host where the genre is poked fun at while a nice story is told. Well, that did not happen. Through a very diligent documentary look, Big Man Japan follows writer, director, and lead actor Hitoshi Matsumoto's character Daisato through the mundane life of Japan's protector from the numerous monsters that plague Japan. Matsumoto gives a wonderfully straight performance, capturing the run down depression of a man who has seemingly outlived his use both in the eyes of the public and his family. Mix that with near perfect comedic timing, and Matsumoto turns in one of the year's best performances. 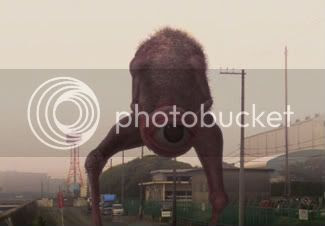 The film also does mix in a few bigger fights, making use of CGI as best it could and making up for the less than perfect images by having an incredibly stylized group of monsters terrorizing Japan. And then there is the whole social commentary/existence struggle themes through run throughout the film, both of which are handled masterfully. And then the film ends, and what a finale Matsumoto presents. Hysterical to the extreme and incredibly poignant, the film's final fight sequence speaks volumes on American culture in Japanese society, media sensationalism, and one's struggle with humanity. The film is far from flawless, though I do think that the pacing is excellent, but Big Man Japan is a unique ride that is open to a plethora of readings. Any film that provides that is great in my book. 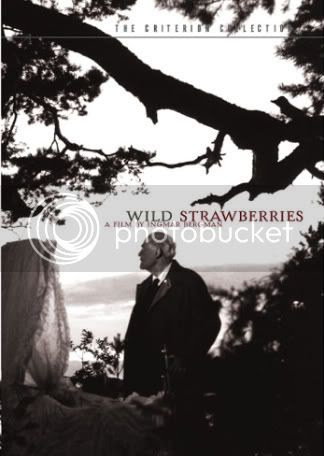 Speaking of films that are ripe for interpretation, Wild Strawberries is my second Ingmar Bergman film. A meditation on life, looking back upon the existence of a professor who has seemingly alienated his family and friends over the years, Bergman presents a quiet and compelling narrative with an incredibly compelling character at the center of the flash back filled affair. As Dr. Borg revisits his memories, the viewer is presented with a brilliantly structured film flowing to the brim with imagery and symbolism. Of course that is a blanket statement that requires a bit more thought. One scene has a cradle placed out in the woods, standing far enough away from the house to give the viewer some hint about something or another. This is all very vague, though with good reason, I was confused. Bergman creates a film here that is rewatchable, I am sure, but for some reason I was never completely hooked either. This film is odd. I should watch it again. Would have not put this entry up, but I love the poster.

Also I am on the old Twitter thing so I guess you can follow me at twitter.com/FLYmeatwad.
Posted by Rich Thorne at 6:52 PM