And The Ancient Empty Street's Too Dead For Dreaming

With Toy Story 3 Pixar has attempted to return to an incredibly successful universe years later and capture the same charm that made the originals so endearing to so many viewers. Flashes of Star Wars. But will Pixar be able to follow in Lucas's footsteps and effectively deepen their world and characters while improving in nearly every way over the original material? With years of mediocre films clogging up their studio in the past decade, yielding only two and a half films of any substantial value, I was skeptical that the studio would have success. While I certainly am not surprised with the results, I found myself a bit surprised at how well specific aspects of the film are handled.

First let us talk about the positives, my friends. We shall strip away all of the fat: throw the shoehorned in jokes away, toss aside the sight gags, forget about all the action and adventure, and focus squarely on the idea of transition. Whether transitioning from life at home to life alone, high school to college, teenager to adult, any change and the gray area between our own prescribed blacks and whites. Early on in the film we see Andy sit back in his chair and peer around his room for what will be one of the last times in his life, and he lets out a sigh. In this sigh the film captures more power than any of the dialogue can hope to ever encompass. Similarly, Woody's pleas with the toys to return to Andy after a mix up has them feeling cast aside, we see both humans and non-humans struggling to reconcile their old life with an unformed future. Later in the film an incredibly touching moment is shared between Andy and his mother. These brief glimpses at honest emotion, conveyed excellently in context, do what successful works of art accomplish: hit on aspects of humanity without feeling artificial. And for the most part, surprisingly, these moments are spread out instead of lumped together to simply 'get' the audience as they were in Up, or far too few as they were in Wall*E. The final scene goes on far too long and becomes a bit too manipulative, but the outline of honest humanity still shines through, at least mostly. 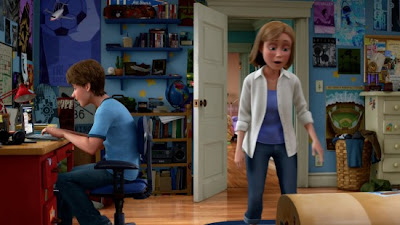 However, Toy Story 3 is hampered by all the fat around the edges, despite the film's attempts to conceal the weaker points that seemingly weave their way in to keep audiences entertained as a standard action/adventure film in the vein of Up and Wall*E's dreadful final 'chase' acts. Essentially, Toy Story 3 is Toy Story 2 except better paced. Remember the not so funny part in Toy Story 2 where the two Buzz Lightyears got mixed up and the one acted like Buzz did in at the start of the first film? That aspect is mostly back again, except now Buzz is back to acting like a 'real' spaceman while speaking Spanish! And dancing! Zany! And the whole lovable, elderly, fat guy who turns out to be controlling, manipulative, and downright despicable, remember that bit? Well that plot line is recycled in the form of Lotso, a bear abandoned by his former owner, making a nice foil for Jesse. Speaking of Jesse, recall how intolerable she was in the previous film? Well she is better in this one because her role is incredibly downsized. Since the film cuts between so many different areas so quickly, and has the characters constantly moving forward, Jesse, and really very few of the toys, ever get to take center stage, which results in some fairly underdeveloped characters. At one point Woody encounters three new toys, all of which seemed interesting, but these characters are on the screen for such a short time they feel more like joke devices than actual characters, resulting in really simplistic interpretations of these individuals. The same can be said of the figures in Lotso's 'family.'

The simplicity is the largest problem that I have with Toy Story. When you have such a complex and layered concept at the center of the film I imagine that the characters would not be so black and white. But with the exception of the giant baby, and I guess Ken, the film is packed with stagnant characters. None of the toys make any major changes, even Woody's supposed realization that they are better together with someone else than separated while he stays with Andy, is complicated by the way Woody essentially becomes a figure comparable to Lotso. But the film pays no attention to this idea, the toys are happy, so Woody is right.This aspect is one of many small bits of logic that break apart when one looks very deeply into the film. How does Lotso know the telephone is in league with Woody and gang? How does that kite get blown so far up in the sky? How can the aliens operate a crane? Why does Lotso need a cane if the spa area can fix even the oldest toys? Why can he run so quickly at the end? They just happen.

A number of the aspects of Toy Story 3 just happen, seemingly because that is what is supposed to happen. So we get an excruciatingly long heist sequence at the end. We have a confrontation with Lotso, an inexplicable grasp of Woody's leg to keep the 'action' sequence going. We also have a Dreamworks~esque back and forth with Barbie and Ken, complete with pitch perfect musical cues and slow motion that would fit right in during the lowest of Shrek films. And a costume changing montage that, if I recall correctly, makes use of "Kung-Fu Fighting." The only thing missing was "Barbie Girl" at some point. The back and forths are not funny, actually there are only a few occasions of legitimate humor in the film. What makes the movie tolerable, and oddly what prevents it from being very good, is how quickly it moves the plot forward and how little time we spend with each group of characters. Barbie and Ken are painful to watch, but these bits are fine because they do not go on incredibly long. Same with any bits involving Jesse. Sadly that means the portions with Andy and Woody are also short, but better these good parts be brief than the bad parts be too long.

As a refinement of Toy Story 2, Toy Story 3 works on just about every level. As a successor to Toy Story, this film falls incredibly short. As an entry in Pixar's catalog, Toy Story 3 is, like many of the studio's films, a middle of the road feature that contains flashes of enjoyment and even brilliance, but is held back by so many paint by numbers story telling techniques, irritating characters, and flat jokes that these features seem lesser by comparison. However, the greatest achievement of Toy Story 3 is the restraint in how emotion is handled. My largest problem with the first ten minutes of Up the obvious manipulation going on in that portion of the film, a trait that only became more apparent as the film tried to integrate emotion further in the run time, and the same can be said of Wall*E and even parts of the masterful Ratatouille. When Toy Story 3 attempts to create a specific mood it works so well, it is just a shame the rest of the film has to exist.

PS: The short before the film was pretty good, and watching Night and Day pal around was enjoyable. The short film genre works for Pixar so well because it allows them to take an incredibly simplistic concept, and the ultimate message of this film certainly is painfully obvious early on and incredibly generic, but through they can play with visuals in such inventive ways and break out that message in an interesting enough way that it makes the simplicity forgivable. I prefer more experimental short films because they allow for much more complex and ambiguous ideas to be explored while engaging me on a cerebral level, but for the opposite end of the spectrum, Day & Night does a pretty great job at being entertaining.

Also I am on the old Twitter thing so I guess you can follow me at twitter.com/FLYmeatwad.
Posted by Rich Thorne at 11:44 AM