Generals Gathered In Their Masses Just Like Witches At Black Masses 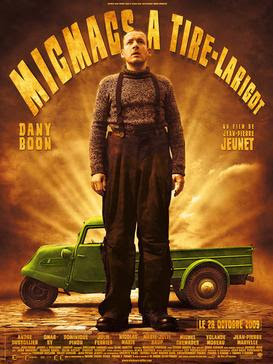 The French are a people filled to the brim with whimsy. At least what I know of Jean-Pierre Jeunet's filmography gives me grounds with which I formed this notion. I have never seen Juenet's most famous film, Amelie, but if Micmacs is any indication of what I can expect from that film, I suppose I ought to spend some time watching the other film. What struck me so much about Micmacs was the way that the scenes simply flow into one another, capturing perfectly the a range of emotions that each scene demands. While the film is, by nature, an incredibly light hearted event, what surprised me was not how well the comedy on display is handled, but rather how suspenseful and dramatic the film became during the 'heist' sequences. These scenes blend comedy with delightfully dark moments to create such an engaging mood.

The film also never takes itself incredibly seriously, which adds to the mood created by the blending of reality with surreality. The film opens with a shockingly jarring few sequences involving a few bouts with death that, for me, came completely out of left field. These scenes were completely necessary though, as well as very enjoyable, as they provide set up for the rest of the film. Actually, this film narratively bears a remarkable amount of resemblance to one of my favorite films of last year, Fantastic Mr. Fox. Our protagonist attempts to take down two big businesses in a decidedly whimsical manner. But the difference is found in the much more overt social commentary that comes along with Jeunet's film. While Fox reaches greater understanding by serving as a critique of classicism, Jeunet is more concerned with the directly 'human' troubles that companies, specifically companies designed to create war, cause in the world. Early on in the film one of the company heads boasts that his weapons are designed to maximize on collateral damage to cost the enemy more money than dead soldiers would require.

One aspect that I particularly loved was the inclusion of billboards throughout the film that boasted the film's title and were direct mirrors of the scene that was currently playing out. Given the film's introduction this aspect added another layer of intrigue, causing me to wonder exactly how much of the world on display is 'real.' The entire film builds to a climax that is immensely rewarding, tying the film up wonderfully and solidifying the generally fantastic pacing on display. While Jeunet's work does occasionally feel a bit too topical in its approach, and despite a number of scenes occasionally carrying on to the point where the whimsy became slightly overwhelming, Micmacs is an enjoyable and self aware romp through a just barely surreal France.
Posted by Rich Thorne at 5:54 AM