But It Grieves My Heart, Love, To See You Tryin' To Be A Part Of A World That Just Don't Exist 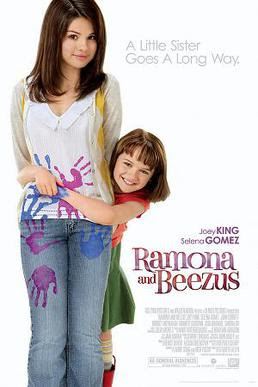 Ramona and Beezus (Allen, 2010)
In our world technology moves at a break neck pace, you practically buy the latest gadget and the device has already been outclassed by the next technology on the horizon. I turn on the news and hear the horrors of the world, I see the Datelines, the rehabs, the violence, the predators, and the beaters. So amidst all these horrors is it possible to find solace in a film that acts as a pure artifice, in a world that technology and horror has seemingly left in the past, the America of yesteryear, an America that perhaps has always been idealized but has never purely existed? Standing on the outskirts of these horrors is Ramona and Beezus, a little light of hope, a town where trouble exists, but is veiled by the wonder. I have little knowledge of the source material which has spawned the latest G Rated family film, yet even without this affinity I found it near impossible not to be captivated by this film's charm.

Detailing the journey of titular protagonist Ramona Quimby as she struggles to come to terms with her existence on Klickitat Street. While she confronts standard conflicts such as fitting in at school and dealing with a home life where she also stands out from her seemingly perfect sister, the film adds a compelling layer by having Ramona cope with the loss of loved ones, feelings of isolation, and the conflict of a completely changing home environment. And in this layer is a beautiful sincerity and respect for the audience, regardless of age, that is not afraid to explore the darker side of childhood and stray from the beautiful hand made day-dream sequences for incredibly effective dramatic segments.

These aspects create such a wonderful tone throughout much of the film, and the central performance from Joey King goes a long way in selling these scenes, but it helps that she is surrounding by a surprisingly talented cast. The actors who play the adults in the film all do believable jobs of handling their lines, and as the film continued on I found myself taken by the turn that John Corbett makes as the father; however, the stand out of the adults has to be the repentant egotist Hobart, played by Josh Duhamell. And then, of course, there is the most recognizable face in the film, Selena Gomez portraying the eldest girl in the core family, Beatrice "Beezus" Quimby. Selena possesses such a glowing and infection charm that it seems near impossible not to be taken by her acting, but despite her character being mostly irrelevant considering she is a titular character Selena's big scenes show an impressive range that she has demonstrated before, but not in such a concentrated capacity. One scene has Beezus walking home with her childhood friend Henry, and Selena turns in such an impressive performance in this specific scene that she appears to be set for much future success. King gives the better performance overall, though a good amount of that has to do with the character's role in the film and Selena's wise choice to play Beezus as human rather than an over the top vehicle to showcase her range.

But underlining all of the performances, the conflict, and even the wonder is the portrayal of an idealized America. What struck me while watching the film was the relative absence of technology, especially in relation to one incredibly contemporary problem that plays a large part in the story. This absence creates such a tension in the film by juxtaposing timeless aspects of the narrative and world with the contemporary concerns. And the more I consider the film I also notice an incredible absence of ethnicity, so much so that the only trace of African Americans came in the background in the final scene, and Sandra Oh, but even her role is minimal. Selena is even asked to pass as white. These aspects, perhaps even more than the ideas the film concerns itself with, offer a fascinating look at the Hollywood presentation of the ideal America, one that proves as uncomfortable as appealing. The simplicity of life, the wholesome concerns, and the importance of human bonding is all appealing and beautiful, but much like the wonder and charm in the films plot, a disturbing and dark side lurks underneath the surface.

Still, Ramona and Beezus does offer a celebration of nostalgia that, at the very least, constantly entertains and, at its best, proves to be enlightening. An America that has passed displayed in a genre of film that has apparently been all but forgotten in the wake of CGI extravaganzas and 3-D opuses. The film can likely be faulted for less than stellar comedy, but the film never seems incredibly concerned with generating laughs, just chuckles, the chief concern is the characters and the plot, letting these aspect develop naturally, and in that regard it succeeds. Ramona and Beezus is not a great film, perhaps it may even be mediocre, but is does offer a cinematic gust of fresh air that has only sat better and better with me since leaving the theater.

Also I am on the old Twitter thing so I guess you can follow me at twitter.com/FLYmeatwad.
Posted by Rich Thorne at 7:35 AM