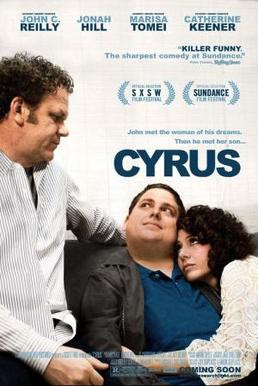 Cyrus (Duplass and Duplass, 2010)
In the past couple of years there seems to be one runaway indie comedy that is usually distributed by Fox Searchlight that reaches an unexpected amount of people and is met with surprise financial success. The most notable of these films are Juno and Little Miss Sunshine, both comedies that attempt to combine dramatic elements and complex characters to create genre hybrids offering more meat than the average romantic comedies that inundate theaters on a near weekly basis. In many ways Cyrus follows in the footsteps of these films, but unlike the other Searchlight features the new film from the Duplass Brothers seeks to bring an entirely new genre, mumblecore, to the masses. As a result the two have crafted one of the most interesting cinematic experiments in recent memory, creating a blend the likes of which your local coffee shop can only dream of concocting.

Cyrus takes so many conventions and places them directly at odds with the audience's expectations throughout the film, and from this aspect a portion of the film's genius is found. While I am no expert of mumblecore as a genre, of the films I have seen it appears that certain conventions of that genre are a heavily improvised script, generally lower key actors, and minimal camerawork to create a more 'realistic' film. So how do you do this when you have the queens of the indie scene, Catherine Keener and Marisa Tomei, Seth Rogen 2.0, Jonah Hill, and dramatist turned Tim and Eric vet, John C. Reily, headlining your film? Well you coax a magical performance from each and every one of these actors. In each performance is a brutally honest depiction of humanity, the complexities of love and the need for security. Stripped down to their basic elements we have a man seeking a major change clashing with an individual attempting to hold on not only to a life of security, but hoping to avoid being completely alone in the world around him. What Hill does with the Cyrus character is absolutely breathtaking, but not only is his turn completely stunning, the Duplass brothers have crafted such a wonderful character that he really deserves much more inspection.

The name Cyrus is, in many ways, completely fitting in regard to the film's themes and the character. While the source is questionable, the entomology section of the Wikipedia article states that the name means either "to bestow care" or "humiliator of the enemy in verbal contest," two traits completely attributed to the titular character. He has a need for nurture, and the film establishes his relationship with his mother as being the only fulfilling one in his life, so Cyrus's decision to act out against John is understandable. The stakes are so intense, but because Reily serves as the film's main character we are asked to also sympathize with him, and the character is incredibly easy to sympathize with throughout the film. At the very start of the film a party occurs, and the energy captured during this scene is so intense and well constructed that it absolutely gravitates throughout the rest of the film. This energy, paired with the sympathy that Cyrus does generate for himself, provides a beautifully engaging central conflict.

The construction of the film is also incredibly important when looking at Cyrus as well because the camerawork also plays against so many conventions. The most distinguishing trait of the film is the abundant use of zooms, giving the viewer a more intimate look at these characters, but even above that the zooms act as a way to work with the tension created between all the different aspects of convention playing against one another. The movie is a comedy as much as it is a drama, and because of the type of comedy, a much quieter and serious style, an underlying melancholy is found in the words, which generates an uneasiness throughout the film. The zooms don't allow the viewer much time to breathe or gain a sense of security, not only giving a layer of direct sympathy to our connection with Cyrus's grasp to hold on to what is comfortable at any cost, but also to heighten the uneasiness in each individual scene.

Cyrus is a film that finds complexity in its simplicity, but also does not allow the narrative to carry all the weight. The construction of the film, each zoom, each shot, each quietly creepy look from Hill, they all work simultaneously to enhance both the tone and themes. The film constantly builds to an ultimate clash of enormous forces until it crescendos beautifully as we see ideologies lashing out against each other. And I was left staggering back to my car after the credits started to flash by, and then I broke down in tears, and while I had a feeling during the film, after having a chance to mull it over more and see how perfectly all the elements work together, I knew Cyrus was not only a great film, but one of the year's best.

Also I am on the old Twitter thing so I guess you can follow me at twitter.com/FLYmeatwad.
Posted by Rich Thorne at 8:51 AM