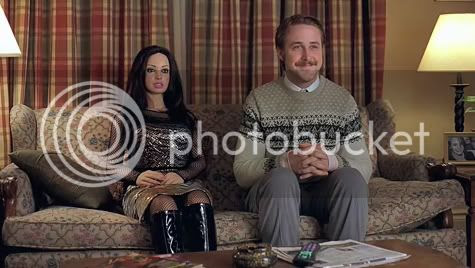 I like to imagine that somewhere in the annals of Hollywood exists a factory. In this factory the overlords/taskmasters/biological engineering geniuses have boxes stacked upon boxes of body parts waiting to be assembled and brought to life in some kind of insane ritual that straddles the line between heretical and miraculous. These Victor Frankensteins toil away all hours of the day mixing and matching parts until the day when the big studios of the world place an order for a superstar. An order was placed some years ago, and the latest creature to be unleashed upon the unsuspecting world was Ryan Gosling, star of Drive and The Ides of March. A man whose star has seemingly risen to insane amounts in the last few months that it has fallen into place, as Bob Dylan may say, so perfectly, it all seems so well timed. But, as a fan of Ryan Gosling's career thus far, I find myself slightly conflicted.

Gosling appears to me to be another in a long line of individuals who Hollywood, through the use of its studio system and a well timed release schedule, has propped up to be the next megastar. The problem with attempting to manufacture movie stars, and I think what is currently happening with Ryan Gosling is a conscious effort to brand him as the industry's new superstar, is that such attempts tend to come off as incredibly artificial. Sure, Gosling has always had the talent, between his roles in Lars and the Real Girl, Half Nelson, and Blue Valentine, to be a headlining actor, and he certainly has the physical appearance to leave the nation swooning, I mean come on it's like he's photoshopped!

When thinking about Gosling as the new star, it seems useful to look at the most recent case of sure-to-be-superstar. To me Ryan Reynolds seems to almost perfectly fit this bill. Reynolds is a fairly talented actor, just look at his work in Adventureland, he's a good looking guy, and he practically assaulted each and every genre in the past year. Big action film? Check. Generic romantic comedy? Naturally. Suspect quasi-independent film? But of course. And after one major bomb and two tepid films Reynolds has seemingly disappeared from the public's radar.

So what does this mean?

Well you better make some money, Ryan Gosling, or else you're going to be kicked to the curb as well. It can be argued that Gosling's obligatory romantic comedy, Crazy Stupid Love, performed well at the box office, but when the cast also boasts the likes of Jullianne Moore, Emma Stone, and Steve Carrel it's hard to be labeled as a 'Ryan Gosling vehicle.' That basically sets the stage for the next, almost too literal, Ryan Gosling vehicle, Drive. This one pretty much doubles as his quasi-independent film too if we're overlooking Blue Valentine. While critics seem to have latched on to the movie, and given the type of film it is, I would call this a financial success. Hardly a rousing success, but still a success. And now The Ides of March, being marketed basically as a Clooney/Gosling hybrid, may be his real chance to demonstrate some box office pull.

So good, at least half of the equation has been met. Potentially anyhow, as we still haven't seen a solely Ryan Gosling film be a rousing box office behemoth.

That still leave the glitz and glam lifestyle that gets tabloids and paparazzi all abuzz. Even if you're not in a film being advertised on every television in the nation you are still in the collective conscious. On this front I fail to see Gosling's viability either. I said it before, but he's good looking. Naturally cameras will be attracted to him, but even with my limited knowledge of the TMZosphere I have heard little of Gosling's non film related adventures. Even if we are not talking Brangelina~esque scandals, I would at least have expected Gosling to generate a human interest story by now. I mean there are dolphins to be saved, you know?

The jury seems to still be out on the status of Ryan Gosling as the next super star. And if he's not does that mean that Hollywood will have stripped us of another quality actor who just wasn't good enough? Sure there's always a place for Gosling in smaller films, but unless you're in the right market many of these smaller affairs can easily fly under the radar. This weekend may very well be the tipping point for Gosling, his last chance to make a splash. Will he begin a race to join the ranks of Brad Pitt, Johnny Depp, Will Smith, and George Clooney, or will he join the ranks of the Shia LaBeoufs, Ryan Reynolds, and Larry the Cable Guys of the world? The fires are burning, I'll be interesting to see what the landscape looks like when the smoke clears.