So last night I found myself watching a White Stripes concert film/documentary hybrid, The White Stripes: Under Great White Northern Lights, and as I started to type up a reflection on the film I found that the actual substance to the film was not nearly as consequential as the thoughts the film raised. In fact, the film made me realize two very important things, and I keep questioning a few ideas in relation to these revelations. 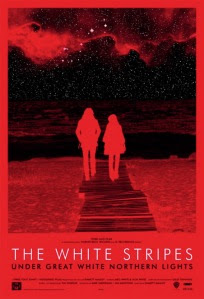 Can concert films and docu-concert films have any sort of relevance outside of fans of a specific genre? Can these films be evaluated in a traditional sense and are they subject to the same criticism that I would apply to the latest Pixar film or the newest feature from Ramin Bahrani? I would like to think that I can, and the recent trend of concert films likely will not slow down in the future, but after watching this film and Rian Johnson's document of the Mountain Goats' latest album in The Life of the World to Come earlier in the year I struggle as to where I should place them on my year end lists. Particularly in the Johnson film I love the music, and between performances we gain some kind of insight to the artists, but these discoveries only help perpetuate the intentional fallacy without offering much toward the overall interpretation of these works of art within a work of art. 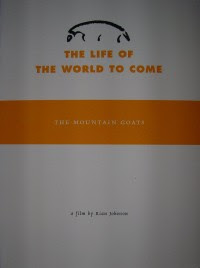 But the camera work in both the Mountain Goats film and the White Stripes film are varied and interesting, technical aspects that I would scrutinize in any other film. But these films are considerably different than stand alone documentaries like Don't Look Back where the emphasis is placed on the musician and the legacy, not the music. However, a film like the Jonas Brothers or Miley Cyrus place the focus on the music but also explores the idea of fame clashing with adolescence. Though even these ideas are minor peripheral concepts in the films. Yet I was able to take a good deal away from these films and find ideas on which to reflect, and these ideas are present in both the White Strips and the Mountain Goats films, but I think my enjoyment of all these films is tied to the music just as much, if not more so, than the craft and themes explored.

So is the only difference between these concert films and a film like Fantasia the music on display? Perhaps there is another separation that I am having trouble seeing. Is it possible to enjoy a concert film, to rate it highly and hold it in high esteem, without liking the music on display? Should these films even be inspected like traditional films? If not, how should I approach these films? These are questions I should probe further in the future and will likely continue to be fascinated on until I find an answer to satiate my interest.