Don't Blame Us For Visions Of Princess Cuts On Our Fingers 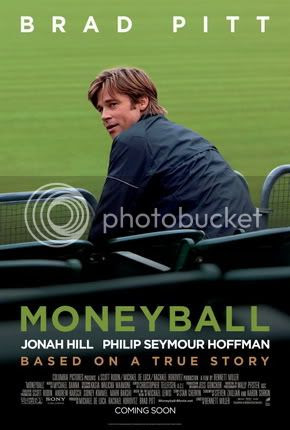 October, or more specifically September if we are going by calendar release dates, are the days of baseball. Sure the NFL usually comes back around this time, but America's game is beginning to wind down from an exhausting summer marathon. It makes sense then to release a movie that revolves around the sport around this time of the year. It makes even more sense, with Oscar nominations looming in the not too distant future, to release a film that stars Brad Pitt. All the chances for Moneyball, the story of Billy Beane's attempt to reinvent the dynamics of Major League Baseball, to thrive in a major market are certainly in place. This is when champions are made. This is when A's fan actually have a chance to watch their team (or well, a lovingly designed simulation of their team of years past) in the post season! But is the simulation enough?

Hardly. Despite only being a casual fan of baseball, I actually have a fairly decent knowledge of the actual story behind the events that make up latest film from Capote director Bennett Miller. That being said, you basically do not need a working knowledge of the sport or the events on which the film is based to comprehend the fairly standard sports story that Miller and screenwriter Aaron Sorkin explore. Actually, it's probably for the best if you do not know too much about the Oakland Athletic's because, unlike other based on real life events films, being privy to the results of the A's season pretty much sucks out most of the stakes from this overly bloated affair.

Unlike sitting in on an actual baseball game, the film's languid pace is not highlighted by striking marks of beauty in what should be an overly plain affair. I'm not entirely sure if the scenes themselves are not constructed so well or if the director is just making poor use of space, but when the frames don't feel too constrained they are so incredibly open without actually serving the scope of the film. In fact, all of the director's choices seem deliberately designed to slow down the pacing of the film. I understand that, perhaps, it is meant to mimic actually watching a baseball game, but when you're watching a game live the end result is still completely up in the air, and the way the game gets to that result is much more interesting than most of the scripted beats that line Moneyball. There are a collection of enjoyable scenes, mostly where Beane is wheeling and dealing in the off-season and around the trade deadline, but even at its best moments the hot stove barely feels lukewarm.

It is easy to say that I was underwhelmed by this film, though even in that disappointment I can appreciate many of the performances on display. As Billy Beane, Brad Pitt turns in an enjoyably unhinged turn that, while it doesn't completely sell the emotional motivations of the character, is constantly a delight to watch. The supporting turns from Philip Seymour Hoffman and Chris Pratt are also great, especially Pratt's work, but the movie does not utilize either one to their full potential. For the most part they are simply relegated to insulated moments where Billy Beane barks an order at them and moves along. Jonah Hill, after a great turn in last year's Cyrus, also underwhelms in the role of a fictional assistant to GM Billy Beane. He has a few moments where he's funny, but as a character the man seems all over the place.

I feel as if I am being needlessly tough on what is, in actuality, a fairly mediocre affair. Aside from the pacing, and clocking in at slightly over two hours, there's little to be offended about when it comes to Moneyball. Unfortunately, there's even less to drum up any sort of excitement about either. Perhaps it is because I knew the outcome, perhaps it's because I never was given much of a reason to care about the real Billy Beane. I mean, he's pretty much delusional, and what successes he had could just as easily be attributed to the players on his team left unmentioned (including MVP Miguel Tejada and Cy Young Winner Barry Zito) as they could to his moneyball strategy. Where does that leave you? Well it leaves you being called an idiot, albeit lovingly, by your daughter while the credits roll. Where does that leave me? Nowhere I want to be.


And if you want to know what I'm watching, listening to, playing , and reading you can follow my tumblr account!
© 2011 Richard James Thorne
Posted by Rich Thorne at 4:04 PM