And I'm Sick And Tired Of Wondering What Your Presents Mean 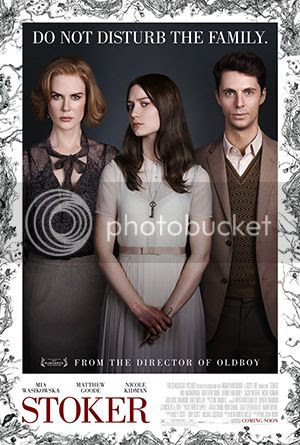 It's always interesting to see how an artist transitions from one medium to another, whether it be a painter stepping behind a camera or a novelist turning in to a screen writer. Yet with Stoker, director Park Chan-wook is not moving mediums but is actually breaking language barriers. If that isn't already a massive challenge to take on in what is the first English language film from the Korean visionary, then why not add in an extended metaphor of the physical and sexual awakenings that define the adolescent experience? If there's one thing that everyone can universally understand it would definitely the teenage psyche.


Filtered mostly through the eyes of India Stoker (Mia Wasikowska) in the wake of her father's death, Park Chan-wook creates this visually off-kilter world that takes many cues from the Gothic both in its aesthetic choices and character behavior. Early on in the film, at India's father's funeral, her Uncle Charlie (Matthew Goode) inexplicably appears out of nowhere (to the point where India didn't even know he existed) and begins living with India and her mother Evelyn (Nicole Kidman). From there he begins seducing Evelyn as the film begins to reveal his true intentions and the menacing reality behind Charlie's patented leer.

FROM HERE ON OUT THERE WILL BE MILD SPOILERS. 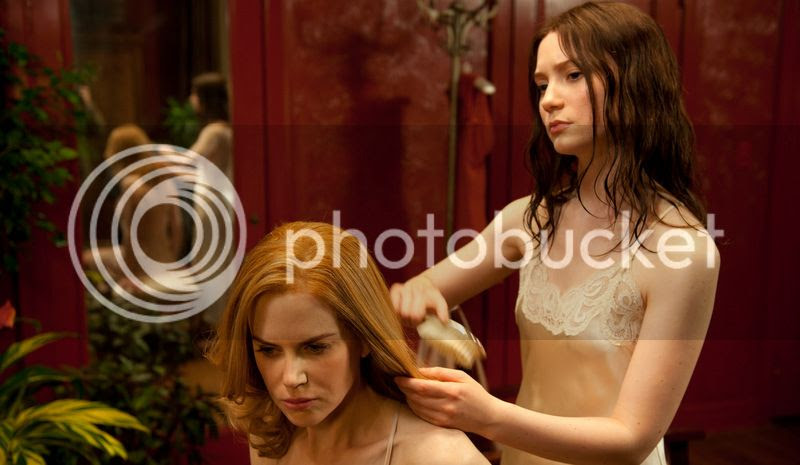 Before I get in to all the great parts about this film, I kind of feel like I should get the worst parts out of the way first. Namely, despite the best efforts of Park Chan-wook to inject each scene with as much style as possible, there's basically nothing that he can do to save the screenplay at this film's core. Wentworth Miller, best known for starring on FOX drama Prison Break, seems to invoke the name Stoker for reasons unknown to me. Rather than recalling Dracula, Frankenstein, or even something like Wuthering Heights, he simply re-tells Alfred Hitchcock's Shadow of a Doubt. But that film was penned by one of the masters of many mediums, famed American playwright Thornton Wilder, and Miller is definitely no Wilder.

What results is a film that kind of grasps at a few different themes, but focuses in on very few. The most notable theme is found in the form of a metaphor set up at the beginning of the film and returned to at the end dealing with a flower's inability to change its color. There seems to be some wry probing at human nature, considering how the image at the beginning is juxtaposed with the end, but even that isn't touched on too much throughout the film. Instead, what is present are some references to a possible supernatural connection between Charlie and India that kind of disappears when Charlie becomes just another crazy guy.

This is made all the more frustrating because visually, most notably in India's outfits that kind of becomes a modern(-ish) governess figure and the juxtaposition of the Stoker house with the modern(-ish) high school/town setting, there seems to be a conscious effort to appeal to the Gothic. When a director is as visually accomplished as Park Chan-wook, one would imagine that a script would want to bring as much supernatural crazy as possible without getting silly, perhaps something like A Turn Of The Screw, and in brief spurts it seems like that's what the film is attempting to hit, but these surreal interludes are gobbled up by an unsatisfying and betraying reality that is almost empty.

But beyond the flimsy script, there's a ton worth loving about what is going on in Stoker. Specifically, the actual way the camera functions is something of a marvel. Now a large part of the mood that Park Chan-wook creates also falls on some spectacular editing that helps to unsettle the viewer. Though the film isn't exactly scary, creepy, or even too hard to track, a sense of manic energy does pervade even the most serene scenes. Transitions and cuts between characters create associations that seem to amount to a good deal (even if the reality proves to be less so), creating a visual splendor that is hard not to be charmed by after only moments.

There are also a few great performances tucked in here. I never felt a sense of dread when it came to Goode's Uncle Charlie, but the way he was able to engulf just about every scene he was in is admirable. Nicole Kidman gives what is probably the film's most varied performance, and even though her character is kind of simplistic she does bring a sense of emotion to the role. But Mia Wasikowska, in an divisive turn as India, was my favorite. Much of the time she scowls, but it's what's bubbling underneath of the surface, what she's able to communicate in how she moves, that makes her so captivating.

While I would have liked to be more taken with Park Chan-wook's English language debut, I can't give him much of the blame. The script is so all over the place that, despite feigning focus, it reveals its flimsiness by the end. However, if one is able to overlook the less than satisfying plot there is certainly more than enough to appreciate and enjoy about the actual act of watching the film. It's always great to see a master at work.

After handling vampires with Thirst, I was prepared for this film to take a supernatural turn, and as a result I guess the turn it did take was made all the more underwhelming. I know my expectations for this film were enormous, it was one of my thirteen most anticipated films of 2013, but even looking at it as its own text (to the best of my ability) it still kind of disappointed me on a narrative level.

The Last Stand was also a pretty good English language debut from Korean director Kim Jee-woon. Korea is still a cinematic hotbed, producing some of the most intriguing films out there, and it seems like both of these guys can cut it in the US, perhaps with better source material. I'm not sure which I preferred more or less, it's easy to enjoy Arnold's return to action stardom in a genre send up, but I could also watch a Park Chan-wook film any day of the week. Regardless, Bong Joon-ho's Snowpiercer remains perhaps the most promising 2013 English language debut from a Korean director and I can't wait to eventually see that one.

And if you want to know what I'm watching, listening to, playing , and reading you can follow my tumblr account!
© 2013 Richard James Thorne