Escape Is A Paradox, Because The Childhood Is Locked In That Music Box 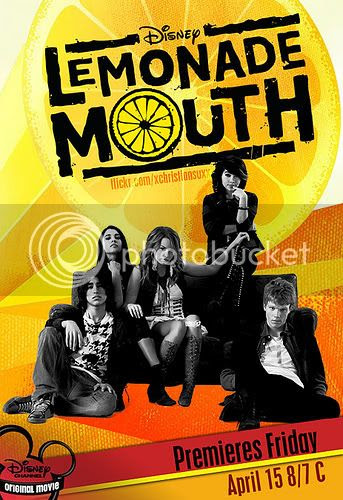 I have had a long standing love/hate relationship with many of the Disney Channel Original Movies; however, with the release of The Suite Life Movie earlier in the year and the recent release of the newest in the long line of High School Musical~esque films, Lemonade Mouth, I am finding fewer things to complain about in regard to the movies that the company is making for the small screen. Anchored by a startling strong cast of Disney's newer stars (Bridgit Mendler and Adam Hicks) and some new comers (Blake Michael and Naomi Scott) who make up the rag-tag titular band, the movie has a solid foundation to build some momentum. So does the latest Disney Channel Original Movie ever elevate beyond the strong foundations and become a film worth the time of the many people who would readily dismiss it? That question is, unfortunately, a bit difficult to answer.

The premise of Lemonade Mouth is fairly simply: a group of high school kids form a band to speak out against an overly oppressive principal. They are led by for Wizards of Waverly Place guest star Hayley Kiyoko in the role of Stella. We'll probably learn some sort of life afirming lesson by the end of the film too. You know where this plot is going. However, the way it gets there is notably more mature than many of the other Disney films that have preceded it. There are illusions to jailed fathers, broken homes, and fathers wedding girls half their age or something. Most of these are only touched on briefly, and I fault the film for that, but that they would even be brought up without being there simply to manufacture emotion, but rather to add to the characters and their relationships, is encouraging from a film that could very easily be a mash up of Camp Rock and High School Musical.

And as you might expect from a mashup of those two franchises, the true pull of the film should be the music. Here's the thing, I have watched all of the HSM movies and both of the Camp Rock movies. It is tough to compete with a combination of Demi Lovato and the Jonas Brothers, and the high points of the Camp Rock soundtracks are better than the best of the songs from Lemonade Mouth, but this film probably has the most consistently enjoyable collection of songs from any of the other films. And actually, what I love about Lemonade Mouth is how the songs reveal themselves during the film. They are able to be showcased naturally, as organic parts of the plot. There are not the bombastic, jarring breaks of a High School Musical, nor is there the artificially manufactured superstar led camp of a Camp Rock. Much like Camp Rock or Once, Lemonade Mouth is a musical, but the music happens in a believable context, and unlike Camp Rocke high school environment is much more (Baudrillard be damned!) believable. And the film benefits because of that, the immediacy of the relationships between the band mates is felt more strongly. These years are fleeting, there is no time to let this dream slip away.

Lemonade Mouth is not an in depth look at the high school experience, and despite some solid camera work and a striking color palliate used visually in the film the movie is not a technical wonder either. But the five actors that hold the band together do turn in incredibly solid, and usually more so, performances that showcase a natural chemistry between all of them. Combined with a well rounded and incredibly enjoyable soundtrack, Lemonade Mouth is a movie with more than enough charm, and even some deeper topics, to stand on its own as a quality diversion from the more serious elements of cinema.

Also I am on the old Twitter thing so I guess you can follow me at twitter.com/FLYmeatwad.
Posted by Rich Thorne at 6:30 PM