You're Keeping Control Of The Knife, But I'm Not Your Darling 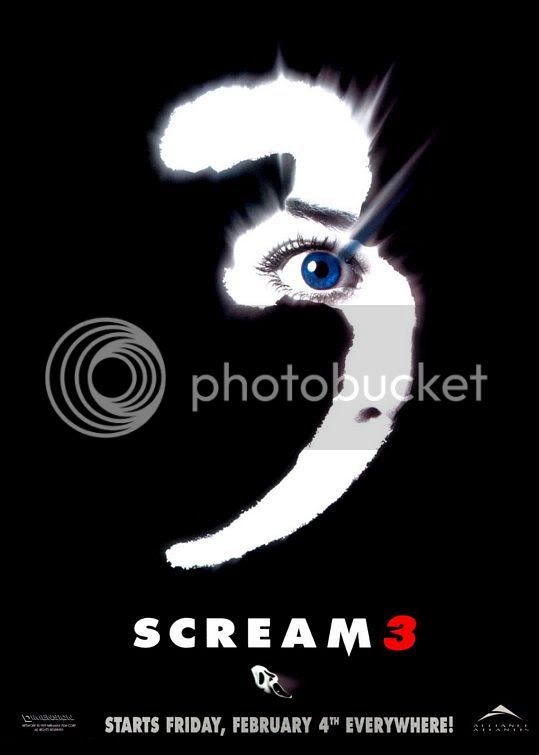 The question I was left with at the end of my Scream 2 review was exactly how Craven was going to continue layering more levels of self referential material on the series without it eventually breaking apart. After watching Scream 3 it seems almost obvious that the best way to handle the world within the world within the world of Woodsboro would be to have the characters meet up with their on screen counter parts. What could be better than Gale Weathers (Courteney Cox) teaming up with fake Gale Weathers (Parker Posey) in an attempt to uncover the mystery revolving around a string of murders in the latest STAB film, STAB 3: Return to Woodsboro?

The answer to that question is rather easy: bring back Randy (Jamie Kennedy) for a video taped cameo where he gets back to what made him most effective in Scream: laying out how exactly these trilogies work. Apparently, as Sidney Prescott (Neve Campbell) is once again hunted down by a new masked Ghost Face, all the bets are off. The killer should become superhuman, capable of taking as many bullets as possible to the chest without dying, becoming a supernatural presence in the film. Craven plays up this bit nicely, showing the Ghost Face figure being shot at, apparently uncaring about any of the bullets that have hit him. He even makes it believable by portraying Sidney as a tad mentally unstable. She hears her dead mother speaking to her throughout the film, which all ties back to the killer's plan to reveal the truth about Maureen Prescott. It would be easy for the film to go off the deep end with the supernatural, odd considering how grounded in reality the rest of the series has been, but perhaps fitting in the way that genre is broken down. I'm glad Craven kept to continuity rather than deconstruction though, as it allows for a much more cohesive viewing experience and a more emotionally engaging film

The central mystery in the film is a compelling point, and Craven gets back to generating scares by blending his steady camera with an occasionally deceptive score. Even the reveal at the end works nicely in the context of this film, and the series up until that point. Still, the main attraction has to be the way that the movie sets itself up as a metacommentary on the industry that has spawned it. Specifically, what works in this entry is how the killer plays with identity in order to create a sense of unstable bonds between a primary core of characters who have twice survived similar situations. It also asks the viewer to question what is happening in the film, a device that plays well with the fabrication of location that serves as the STAB 3 set. In this near perfect recreation of Woodsboro, we explore a world we know, only for something as trivial as the opening of a door to reveal that our sense of place is being completely manipulated. Just looking at the way that Craven crafts these scenes, that he uses artifice to refer to artifice, demonstrates his mastery over his material.

In the previous two films, the series has dabbled in the implications of its characters's actions both in relation to the genre, and simply as characters. The most genuine moments of Scream 3 can be found when Sidney is asked to reflect on herself. Does fear ultimately control Sidney, the cipher through which the audience is meant to experience this world? Where does the line between blameless killing and deplorable murder exist? The film probes at these questions, I think I may have to give up hoping that anything of substance will be reached by watching the series, but I still cannot help feeling at least slightly unfulfilled even if the entertainment value was back up in this movie.

Still, when Scream 3 works, it works overtime for double pay.The highlight of the film that I come back to is found early on when one of the actresses in STAB 3 is asked to read the lines of the script over the phone. The moment is played perfectly, with enough sinister undertones that you know at some point the scene will go wrong, but also asking the audience to know to make this association by reworking the initial dialogue from the first film. The second movie in the series also attempted to do this as well, but we had a screen separating us, here the results were going to be real. The Scream series has gone from deconstructing cinema to deconstructing reality, and in doing so asking each viewer to ask how much of a difference is found between the two. It goes as far as having Jay and Silent Bob make baffling cameo appearances, characters within characters. Perhaps even within characters. When do they stop becoming characters?

As the series evolves we see technology evolving with it. The cell phones become slightly smaller. Caller ID is replaced by *69. It is hard, at times, to ever make these characters feel truly alone. When this happens, Craven examines vulnerability. Does Scream 3 always generate fears? No. But it does manage ambition, to capture a changing world in a world that is completely fabricated. Craven taps in to the basest of human fears and juxtaposes it with the modern context where no one is alone. As I prepare to enter Scre4m, the developments between the turn of the millennium and the present day are ripe for examination and exploitation in a way that, I hope, only Scream can tackle.

Also I am on the old Twitter thing so I guess you can follow me at twitter.com/FLYmeatwad.
Posted by Rich Thorne at 12:38 PM