In Violent Times, You Shouldn't Have To Sell Your Soul 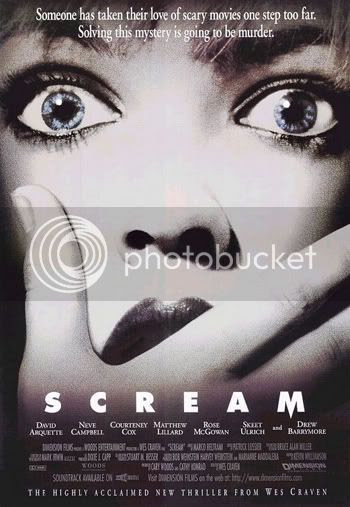 The scene that kicks off Wes Craven's Scream, an excellent exercise in tension building, is also likely the franchise's most iconic. A woman is getting ready to watch a movie, she receives a few phone calls of escalating intensity from a gravely voiced stranger which start with an innocent question and eventually end in a shrieking death threat. What's odd is that this confrontation does not involve the movie's central character, Sidney Prescot (Neve Campbell). It does, however, set up the intensity of the killer that will consume the town of Woodsboro.

Horror is a genre that I do not enjoy, and as I watched Wes Craven construct his 1996 slasher I figured out what most unnerves me about the genre. When a talented hand is controlling the camera, as is the case here, the viewer becomes powerless. Each camera angle, each cut (haha!), is used to withhold, for as long as possible, the release that will come when the threat, in this case Ghost Face, attacks. Craven tells you that it is going to happen, the warnings are there, but in his construction he makes you yearn for the attack, if only to experience the relief of release. He escalates the intensity of each scene, through the use of score and editing, to make the presence of Ghost Face as inviting as it is terrifying.

However, a film cannot exist on scares alone. What makes Scream stand out is the meta-textual components that have characters in the movie questioning the killer's movements throughout. If you've ever watched a movie and wondered if any of the inhabitants had ever seen a movie before, Scream makes you painfully aware that the inhabitants of Woodsboro know their horror films. As someone who is not well versed in the genre it is easy to feel left out, but the way that the script breaks down convention and then turns the screw just a bit further in its own execution (I'm on a roll here) of these tropes is handled to make sure that even the uninitiated will understand how the genre is being deconstructed and reconstructed. Self awareness is easy to mess up, having a film that does not make the self awareness seem pompous, while still noticeably winking at the audience, is a refreshing balance. 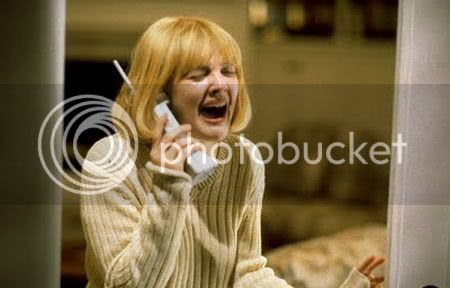 This self awareness is partly where the film breaks apart for me though. The end of the film has anchorwoman Gale Weathers (Courtney Cox) staring forward at the screen and recapping the fallout of the Woodsboro murders. Then Craven pulls back the camera as she walks toward the house where the largest bloodbath has taken place only moments earlier, and we see the camera that Gale was actually speaking to exist within this camera. The technique is beautiful and encapsulates what Craven reaches for throughout the film. My only question is, and it's a rather large inquiry: so what? The film is entertaining, it is, at least partially, scary, the performances are solid across the board (with Stu [Matthew Lillard] and Randy [Jamie Kennedy] being the stand outs), and the central mystery is gripping. But in the end the movie fails to say anything, either about the genre, the escapist nature of cinema, or any larger world implications. I watch film to be entertained, but I mostly watch movies to learn. I walked away from Scream pleased, entertained, but vastly unfulfilled.

Though I think, partially, I am selling the artistic merits of the film a bit short. In a film that is so steeped in deconstruction, that thrives on an awareness of convention and the reversal of convention, the 'confessions' of the killers is perhaps the inkling of theme that I seek. Craven builds up to this huge reveal of the killers, and the surprise is there, but when they get around to motive it appears as if the two young men have no reason for their killing. That lack of confession has its roots back in the anti-climax found in Bram Stoker's Dracula, the absence of reason goes back to the most notable horror convention: the lack of a visible explanation is the scariest thing of all. This idea, the way it is handled, is interesting, it's ballsy even. But I need more than balls, I need meat. Wait. Theme. I need theme.

Conceptually I am in love with Scream, much more so than I thought I ever would have been before sitting down and watching the movie, but I don't get married to concepts. No, I'm more likely to settle down with other, more developed, intangible ideas, which Craven's film simply does not take the time to offer. Damn fun, just a tad shallow. I am glad that one of my first tastes of the horror genre was in the form of Scream though because the scares were not so over the top, and it gives me plenty of ways to grapple with the other genre staples that I am going to tackle in the future. And I'm a sucker for metafiction, even aimless meta, so I'm looking forward to see how Craven expands on these concepts in the future franchise films.

Also I am on the old Twitter thing so I guess you can follow me at twitter.com/FLYmeatwad.
Posted by Rich Thorne at 7:52 PM