You're All Alone, Friend? Pick Up The Phone Then 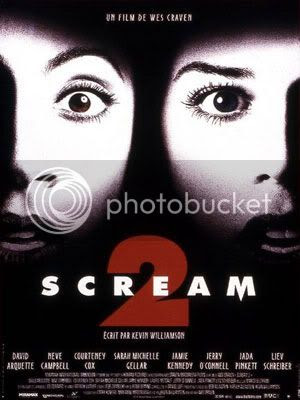 Sequels are inferior films by nature. This claim is posited early on in Scream 2 by Randy (Jamie Kennedy) in his film studies college class. Unless conceived before as part of a trilogy - Star Wars: The Empire Strikes Back is used as one counterexample in the movie - sequels are bogged down with characters and scenarios that are shadows of the original's glory. When you are making a sequel that is as self aware as Scream 2 you have to be confident in your craft to directly call out the inferiority of sequels, to essentially ask the audience to to laugh at, not with, you. So the question facing the follow up to Craven's 1996 slasher is not 'how do you make it work' but rather: why do we need to see these people, this world, again?
Craven's answer is to continue to layer on the self referential aspects of this universe. Opening the film with an elongated sequence that ushers in the return of Ghost Face is enhanced by the droves of people dressed up like the killer watching STAB, a film within the film that is based on a book written about the events of the first movie by Gale Weathers (Courteney Cox). The killer then goes about recreating the victims of the original Woodsboro murders in an attempt to, once again, end the life of Sidney Prescott (Neve Campbell). As a narrative device the layers of artifice on top of one another serve to answer the how, and through that begin to hint at an answer to the why.

Unfortunately, the second movie in the Scream series is still bogged down with many of the problems that Randy outlines in that early classroom scene. The college years introduce a cast of characters that seem so overtly meant to counteract the original cast it becomes overbearing. How many times do I need to hear Sidney's new boyfriend say that he is not like Billy? Probably just once, certainly not the three times afterward. Having Dewey and Gale back was a nice touch, mostly because the characters were each fleshed out a good deal more than they were in the first film, but it's also odd that Sidney and Dewey made no mention of his dead sister in the year since the murders. But ultimately the plot is so by the numbers that any filmmaker, even with the wonderful camera work that Craven puts forth, would have a difficult time turning this story in to a compelling narrative.

What I think this film lacks, and what made the film movie so compelling, is that deconstruction element. When thinking about how to approach my review of the first Scream I was drawn to the way that Randy broke down horror conventions to make even the uninitiated viewer familiar with what this specific film was attempting to accomplish. Sure the first call to Sidney early on when she uses Caller ID to identify who is calling her is a fantastic touch, and the inclusion of cell phones adds more suspense to the final product, but Randy never makes mention of any of these aspects, the film just lets them occur and then never mentions them again. Despite Jamie Kennedy stealing each and every scene that features Randy, we never get that deconstruction. In the classroom scene I keep referencing, truly a beautiful way to set the tone of the film, he simply dismisses sequels outright. Later on Randy goes about breaking down conventions with Dewey, commenting on how copycat killers and horror sequels are set to up the body count, gore, and elaborateness of the traps, but instead of questioning this absurdity Craven later revels in it. There are surprises along the way, and one tremendous loss, but the feeling of Craven restructuring the genre is rarely apparent, even in the final reveal of the actual Ghost Face killers. 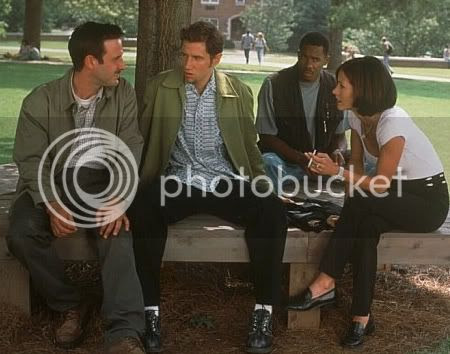 Despite this movie being considerably less entertaining than its predecessor, my biggest problem with Scream, the lack of theme and higher purpose, is handled wonderfully with the sequel. I go back, once again, to the first scene in Randy's film class. The discussion is anchored by a conversation about the connection between violence and film. The idea is carried throughout the film and works wonderfully with the metatextual aspects of the series. Even the way it wraps up, laughing at the absurdity of such claims and the way they are manipulated and abused in a modern context, strikes a resonant chord more than ten years after the film's release.

Scream 2 does have its share of moral debases as well though, most notably in the way that the roles are reversed in the final scene. Just as in the first movie, this one becomes notably silent on the implications of Sidney and her crew ultimately becoming killers at the end of the movies. She loudly proclaims how she killed Billy, a notable sense of pride in her voice. She then goes on to murder the two killers, with Craven's camera even looking up toward the three remaining people as Sidney, vindictively, puts a final cap in one of the killers's blood soaked heads. Now I do not expect her to be Batman, but the movie presents Sidney as hardly phased by ending the lives of others. In this is the implication that few aspects separate the sane from the insane in these movies, we are all capable of murder, but this idea is dropped as quickly as it is raised, which, for a film that is as long as Scream 2, is a grave misstep.

Craven does not make many other thematic missteps though, which helps Scream 2 rise above the fairly generic plot. Sure the film has high moments, the most notable coming from a Danny Elfman scored play scene where Sidney is chased around stage by Ghost Face and a number of her peers. But aside from a few jump scares early on, the sense of dread and excitement that Craven so perfectly captured in the first film is all but absent from the sequel. Still, I cannot help but coming back to the meta aspects as the definitive element of the series. Even without the deconstruction, the elements of artifice and simulation speaks to the English major in me, so pressing forward with the series I hope to see how Craven refines the balance between creating so many worlds within worlds with making appealing horror movies.

Also I am on the old Twitter thing so I guess you can follow me at twitter.com/FLYmeatwad.
Posted by Rich Thorne at 11:20 AM