I Shoot The Lights Out 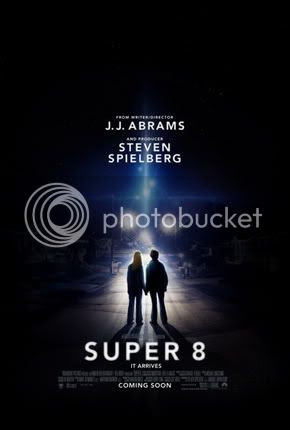 Super 8 (Abrams, 2011)
As I was driving home today I thought back to my psychology classes in high school. One day we talked about multiple personality disorder. The details are sadly scarce, but I like to think that the concept has its place in cinema as well. That at some point during the construction of J.J. Abrams's latest film, Super 8, the split between Cloverfield~esque monster movie and coming of age tale ala almost any film that involves children and/or teenagers. The first genre has enough high points to make me interested, while the latter is my cinematic kryptonite, so despite Abrams making a direct appeal to Steven Spielberg nostalgia, of which I have none, I hoped that Super 8 would find a way to bring these two genres together for some huge awesome cinematic cocktail.

And for the early portions of the film the movie at least partially succeeds in creating an engaging world to frame what should be some interesting meta-exercise in film making. A group of children on the cusp of the 80's, at least that is what the fairly fantastic soundtrack indicates, are making a zombie movie for a local film festival. They enlist the help of Alice (Elle Fanning) to play the love interest, and then they set out to recording. During the night of filming a train crashes, they catch it on film, and the town is sent in to a blaze of fear after residents tart disappearing. The problem I have with the film's aesthetic is that it simply blends too many 'modern' camera techniques with so many overt frames that make reference to classic Spielberg films. What results is an indecisive visual style that is made up of purposeless juxtaposition. Much like the children in the movie, Abrams's camera is stuck in a middle ground between the past and the future, a transitional period with infuriating inconsistency.

The camera is not the only missed opportunity in the film though, the cast by and large are made up of annoying characters being portrayed, by and large, by actors who are largely forgettable. I think the script is to blame, giving the characters overwritten dialogue that was so overtly designed to enhance the setting that it comes off as inauthentic. The notable exception is Fanning, who follows up her magnificent turn in last year's magnificent Somewhere with a completely different, equally complex, performance. She displays a notable maturity, confidence, and cynicism that is balanced out by a confused, childlike vulnerability. Fanning's performance in the film ratchets up the emotional investment in at least half the film two fold, even when the material in the script eventually minimizes the effectiveness of the core relationship that propels the coming of age aspect of the movie. These scenes between Alice and Joe (Joel Courtney) are among the film's most emotionally resonant.

But then the film goes off the rails (zing!). In five minutes it asks us to develop feelings for a monster that has terrorized an entire town, apparently killing innocent civilians (including Alice, which leaves the movie with a gaping charisma hole), and attempts to intertwine the emotional climaxes of its monster movie with its coming of age tale, which results in a final five minutes that fails to emotionally wrap up either plot line. It does not help that the monster seems to arbitrarily decide which people to kill and which to spare, at least until it decides to kill them as well before the movie asks us to sympathize with the creature. So while the CGI of the monster itself is nice, and the decision to keep it hidden throughout helps sell its menacing quality, when the film wants to turn our perception it simply cannot work without a viewer taking serious leaps of disbelief.

Individually either of these movies could be fairly entertaining, but when mashed together amidst Abrams excessive use of lens flare and disjointed action they make for an incredibly uninteresting, easily digestible, piece of popcorn summer fluff nostalgia porn. What Abrams wants with Super 8 is to create an instant classic for viewers of all ages, seemingly explaining the middle ground PG-13 rating and fairly lengthy 2 hour run time, but it never gets complex or dark enough to hit that cinematic sweet spot. Instead, what Abrams delivers is a disjointed mash up of E.T., Close Encounters of the Third Kind, Jaws, Star Trek, The Goonies, Cloverfield, and Jurassic Park without ever slowing down to make sure it ever had a full grasp on its own identity.

Note of interest: This film is not the eighth movie in the Super series that originally started with the Rainn Wilson/Ellen Page film Super released a few months earlier. In fact, that's probably not even going to be a series!