I Was Raised Up Believing I Was Somehow Unique 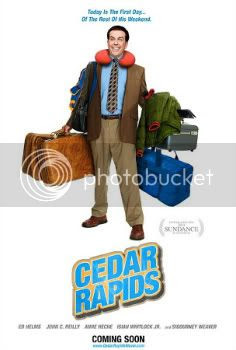 Cedar Rapids (Arteta, 2011)
Vacations seem like a foreign concept to me. Not because I don't take vacations, but mostly because the idea of seeking out an escape is always a way of thinking that I fear. However, I think the greatest appeal of a short escape, especially one taken by oneself, is the allure of being able to completely reinvent yourself. It provides an opportunity for a complete escape, an immersion in a new identity that challenges all the lies we tell ourselves in order to get by each day. It is this conceit that, at least partially, propels Miguel Arteta's latest film Cedar Rapids.

While we do not watch Tim Lippe (Ed Helms), delightfully optimistic small town insurance salesman who seemingly exists in a bubble of mass market lies and blissful ignorance, transform himself as he goes off to represent his company at the annual business conference in the titular town, we do see almost every other character embracing the escape. Lippe's roommates Ronald Wilkes, portrayed by an abnormally hysterical Isiah Whitlock Jr., and Dean Ziegler, played by the always engrossing John C. Reilly, provide fun extremes for Helms to really shine as the film's anchor. He turns in a perfectly balanced performance between blissful paragon and majorly repressed businessman. Which in turn allows for some of the film's funniest moments when the Lippe character is really pushed. Whether it be his inability to realize that Brie (Alia Shawkat) is actually a prostitute and not in Cedar Rapids for the conference, or his drunken adventures with Joan Fox (Anne Heche), Helms shines in a role that could have easily been him simply doing more of his schtick.

Actually, I found the movie to be delightful in the way that it pushed against completely traditional storytelling elements. For the most part the script is not incredibly surprising, at least in the sense that we mostly know how it will ultimately end, but the way that Cedar Rapids gets there is what makes it so special and truly refreshing. While the movie does have a romantic element, it never breaks the motivations of the characters involved in order to add artificial sentimentality to the film. It remains completely dedicated to the idea that everyone except for Tim sees the conference as a way to escape, to let loose and have fun without real world consequences. Though this could potentially lead to the movie being misconstrued as formulaic or to exist without a definitive sense of conflict, the movie is really more of a character study. As a character study is succeeds, and because the character is so well defined even in a world of seemingly low stakes the major conflicts that Tim faces seem dire - but really, in this economy isn't having a job or getting fired almost a life or death situation?

Speaking of dire, this is a fairly dark film. Not simply in subject matter, as it only strays in to truly dark territory a couple of times throughout, but simply in the visual contrasts that Arteta uses. I'm honestly not sure if I've ever seen a film that is so brown. It adds to this small scale that Arteta embraces, creating a world that we all know even if we are not a part of directly. It also makes the brighter portions where Tim is outside all the more jarring. While I was slightly impressed with Arteta in last year's Youth in Revolt adaptation, he really uses the camera to visibly enhance the movie here. From a small, exclusive world we are able to see ourselves in these characters.
And despite not being the funniest comedy, or the most intense drama, Cedar Rapids delivers a completely fulfilling experience. In less than 90 minutes, the film does what most movies can not: it really lets us get to know these characters. And you know what? I think by the end, and certainly in the fantastic credits sequences, they really know each other as well. We all seek out vacations, small escapes, minor ways to redefine and reinvent ourselves. However, sometimes it is only in these attempts to get away from who we are do we end up understanding our actual self. That is the idea that Arteta executes so perfectly in Cedar Rapids. Maybe vacations aren't so bad.
Netflix Rating: ****/*****
Rich
Note of Interest: Helms really nails that sweet spot between the current trend of man-boy, raunchy, zany comedy that appeals to the masses and the more reserved, quiet, subversive comedy that my favorite comedian, Michael Cera, specializes in. He's quickly climbing my list of favorite comedians.
Comments are welcome and, for anyone with a literary mind, I encourage checking out my poetry blogfilled with all original works for your reading pleasure. Or if video games are more your thing, I have a blog dedicated to all gaming news, reviews, and opinions.