I Am Just Different 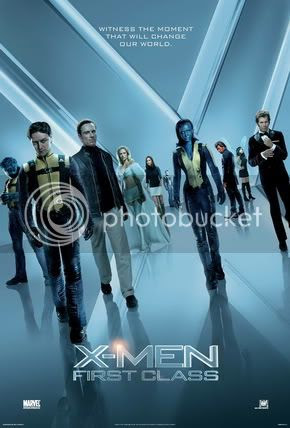 X-Men: First Class (Vaughn, 2011)
By and large, I think of the first X-Men film to be one of the paramount movies to usher in the recent comic book movie craze, and I have actually enjoyed all of the X-Men films I have seen up to this point. Sure I skipped out on what looked to be an abysmal spin off entry with the recent X-Men Origins: Wolverine, but with a cast that bolsters Michael Fassbender, Nicholas Hoult, James McAvoy, and Jennifer Lawrence, a script from Bryan Singer, and at least an experienced hand orchestrating everything in Matthew Vaughn I was excited to go back in time and really see the characters who set this universe in action. But, given my adverse reaction to Vaughn's previous film, Kick-Ass, I entered with tempered expectations, hoping for more, but expecting little outside of another run of the mill origin story.

And in many ways X-Men First Class acts as the ultimate origin story. The audience is not given one, two, or three origins, we are given about five or six. Now of all superhero films it is generally agreed that the origin entries are the most boring because nothing of note happens, and while there is a ton of talking in this movie, I think the larger problem that I have is that too much happens. We know that Charles Xavier is going to become Professor X, that Magneto will be his primary threat, and that Mystique will eventually split from Xavier. So why exactly do we need the Kevin Baker character? Perhaps it is to set up that splits could occur within the mutant community, but if that is the case, and the film is more interested in exploring the different philosophies of X and Magneto in a world that will not accept their kind, then spending too much time on a villain who the audience knows will be taken care of by the end of the film makes for a needlessly bloated script.

But I am not here to do a re-write of the movie, what I am here to do is inspect exactly what worked for me and what needed improvement. At the core of the film the four 'primary' characters (Beast, Mystique, Xavier, and Magneto) were all fleshed out really well. Now a lot of that has to do with what each actor brings to the character, but the intensity between Magneto and Xavier could be felt, the delicate friendship that was always close to shattering. One of my favorite scenes in the film is when we see Xavier begin accepting some of the more questionable techniques that Magneto employs to help the newer recruits begin to control their powers. The moment is small, but along with Magneto's decision to not kill that crystal lady the film begins to prod at that area of grey that is largely ignored for the rest of the movie. Even the romance between Mystique and Beast is executed well, even if a majority of it is done through a needlessly cheesy script that is packed with way too many winks and nods to the audience.

Despite being bloated, being trite, being needlessly cliche at points, the movie is at least entertaining. Watching the primary mutants show off their powers is interesting, seeing Xavier and Magneto assemble a group of youngsters is fulfilling, and Magneto's quest for revenge is conceptually intriguing. Granted many of these are shot in Vaughn's overly flashy style, and at times the film seems to lose its sense of identity which really is a damn shame, because this movie really had the potential to be more than just a solid comic book film. Instead, what it becomes is an entertaining, but fairly simple piece of filler. First Class definitely aspires to more, but for me it takes the easy way out too often. I mean I get that we are, on some level, dealing with racial tensions, or at the very least needless discrimination. But when Kevin Bacon's character assault's Xavier's mansion he asks the remaining mutants if they want to be enslaved. A second later it cuts to a close up of the African American character, who also gets killed only a few minutes later. If you're going to do that, cut to Mystique. Then we get the more subtle commentary on the oppression of women, and it works better with her character. Vaughn has these chances for a more complex film, even in the constrains of the traditional superhero formula, but he rarely capitalizes.

X-Men: First Class is definitely worth it for the big four actors. Seeing Nicholas Hoult, who I know as Tony from the UK series skins put on a convincing American accent is fun. Watching Lawrence battle her dialogue is interesting, though her best moments come when she remains silent and simply emotes. James McAvoy brings an engaging aloofness mixed with a notable seriousness to Charles Xavier. And damn if Michael Fassbender, who between Hunger, FISHTANK, and Jane Eyre has been on quite a roll lately, is not a Hell of a force in this film. X-Men: First Class is not a perfect film, boasting such cringe inducing lines like "You're not the G-Men, you're the X-Men" and "To feel normal!", and seeing the missed potential frustrates me beyond belief, but I'm also happy to be able to enjoy superhero films again. And between the enjoyable, but rather rote, Thor, and the more complex, but incomplete First Class, Marvel seems to be getting on track again, and I'm at least satisfied.

Also, I am on the old Twitter thing so I guess you can follow me at twitter.com/FLYmeatwad.
Posted by Rich Thorne at 7:41 AM