Now In The Morning I Sleep Alone, Sweep The Streets I Used To Own 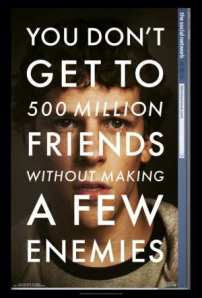 It seems that once every year a film comes out during 'Oscar season' that is labeled as immensely topical, a true testament to our time that perfectly captures a specific mentality that defines our world now, perhaps even defines a generation as a whole. Most of the time these films are mislabeled. Last year we had Up in the Air, the year before was Milk, and now it seems that David Fincher's The Social Network has taken the mantle of my generation's voice. However, just like all of these other films that are incorrectly labeled as purely topical ploys for attention, Fincher makes an attempt to transcend the times and deliver a cinematic experience from what appears to admittedly be a very topical concept: the invention of Facebook. So does Fincher deliver a film accessible by all, or something better left just for friends?


The answer to this question is quite simple, perhaps even easier than a game of Farmville (boom! topical!). Through a blend of Aaron Sorkin's magnificently fast-paced script and David Fincher's steady hand we do not spend our time exploring concepts of privacy or the development of applications; instead, the film treats the Facebook as a tangential creation in a much greater exploration of humanity. The first film that came to mind as I drove home from The Social Network is my favorite film of all time, Paul Thomas Anderson's wonderful There Will Be Blood. Like the Anderson film we have a central character who is consumed by greed, though not the monetary kind that motivated Daniel Plainview, we have an extensive exploration of foundational American ideas which dig deeper to provide insight to the human condition, and they both make use of unnerving scores composed by lauded contemporary rock musicians. The similarities are there, but I do not make such a lofty comparison, one that borders on blasphemy, is entirely apt unless such a comparison helps me reach a greater understanding of Fincher's latest work. Luckily in this case it certainly proves insanely beneficial, which certainly serves as a testament to The Social Network's strength.

Anchored by a powerfully understated performance from actor Jesse Eisenberg, and aided by Sorkin's script, the film is held together by surprisingly deep portrayals of individuals who are all both idolized and completely torn apart by the film's end. Sure each character has some redeeming aspect, but Fincher does such a fantastic job of breaking them down by the end that the film almost transitions in to a comedy. However, like every great comedy the movie is lined with a distinct undercurrent of truth. As we watch Zuckerberg ascend to the top of the world, knowing full well that he is headed toward two ugly lawsuits where he will be defamed, the film begins to explore the idea of progress and the sacrifices we are willing to make in order to gain status. Each character in the film confronts this conflict, and each time when one character makes a gain another relationship seems to come to a close. We watch Zuckerberg's former college accomplices fade in to the background, we see the twins become a footnote in the story, we see Zuckerberg's ex drift in and out, perhaps being the only character to leave the film unscathed.

The film is not so much about consumption as it is about desire, what I find to be an innately human characteristic that also has immediate connections in the world we all inhabit. The existence of Facebook in the film is beneficial because it allows the film's themes, and the questions it indirectly poses to the audience, to be nearly globally accessible. As we watch Zuckerberg calculate and process the world around him Eisenberg brings a bit of humanity and complexity to a figure who is probably easily mocked. But I came away feeling a bit connected to him, understanding that there are aspects of myself in his character.

But I must quickly come back to my There Will Be Blood comparison because I think the main difference is that Fincher does not make his presence known. He certainly does not use the camera in a poor manner here, but his work here, despite it easily being his best film, is fairly inconsistent. He starts the film off with a wonderfully even frame composition, but when the film bookends with an almost too perfectly constructed finale the camera simply seems to exist. The script builds and builds, but the camera work becomes complacent. Highly polished throughout, but unevenly deployed. The score is deployed the same way, almost always perfect, but a bit too inconsistent to juxtapose all the scenes it should create an underlying tension with and not enhancing all of the others it is injected in.

I struggle to talk about this film without using spoilers. However, I do feel the film is terribly complex, a wonderful examination of humanity, not simply a 'Facebook movie.' I feel as if this reflection has barely scratched the surface, so here is likely the deal. I will probably see the film again, hopefully in theaters. In December when it has had time to play I will come back and write a much longer spoiler filled review singing the film's praises. If it sticks, but so far the film has stuck, much longer than many other films i have seen recently. A couple of years ago Slumdog Millionaire, all in all a fairly mediocre to poor film, reminded me why I love going to the theater. Right now what I believe to be a great film reminded me why I love cinema. It did not deliver the feeling I hope to capture each time I watch a film, the feeling I had the first time I saw There Will Be Blood on the big screen, but it has made me think about film again, and for that I am bother grateful, and ultimately surprised, that David Fincher (of all people) could have given me such passion.

So for now friends, that is all. But we will be back. I feel almost completely confident that I am not finished with this film, and I am happy.