When The Lights Go Out, We'll Be Safe And Sound 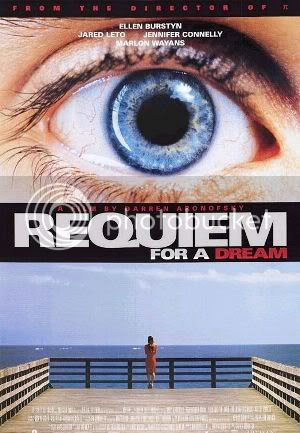 Requiem for a Dream (Aronofsky, 2000)
Throughout my life I have had a number of tiny addictions, nothing ever completely self destructive or all consuming, but addictions nonetheless. However, as I watched the lives of the characters in Darren Aronofsky's Requiem for a Dream play out it certainly seemed like all of my road bump dependencies were absolutely irrelevant. However, when approaching this movie it helped me to look back on the addictions that I have had in the past. Whenever I realized that I was becoming dependent, it always helped me to identify exactly what I was addicted to and either downsize its role in my life or excise it entirely. So as I watched Requiem I applied this strategy and quickly began to discover that the source of the addiction is completely terrifying.

The bulk of the story is told through four main characters who each experience different types of addictions. However of these four individuals, the two anchors of the film are 20-something, drug addict Harry Goldfarb (Jared Leto) and his older, widowed mother Sara Goldfarb (Ellen Burstyn). Though the film has a traditional narrative arc - basically Sara goes to extreme lengths to lose weight in order to fit in her favorite dress before she goes on a game show, Harry and partner Tyrone (Marlon Wayans) start selling cocaine instead to escape their impoverished lives, and Harry's girlfriend Marion (Jennifer Connelley) seeks independence from her parents - the movie is propelled by a study of the characters, Aronofsky's wonderfully flashy camera, and the top notch performances. Though Wayans, Leto, and Connelley hold their own, it is Burstyn who completely steals the show. She has the most heavy lifting of any of the actors, playing a woman who transforms from a modest, if broken, mother to a full on paranoid junkie, so it is easy to be impressed by the range she shows, but I feel she may be at her best when she watches the Tappy Tibbons (Christopher McDonald) program. While watching we see her at her most desperate and her most deluded. The eyes are the mark of a great actress, and Burstyn's eyes convey all the pain.

Though Burstyn's depressingly manic performance also benefits from Aronofsky's visual style that threads throughout the film. I am a strong believer in the power of words, even though common screenwriting convention tends to stress a 'show, don't tell' mentality, but a movie like Requiem for a Dream almost does enough to make me question my personal preferences. The quick cuts that are used to indicate when a character, or multiple characters, uses a substance to get high is a great repetitious device that underscores each character's addiction. By having the same short sequence play out so many times, we also see how dependent these people have become on the drugs that allow them some sort of escape. It also serves as a way to transition from scene to scene. Coupled with the Tappy scenes, repetition becomes Aronofsky's primary device, and it's truly used to contribute to the hopeless, devastating tone that carries throughout. Like all great cinema, the technical elements are used to enhance the themes the film attempts to explore.

And I certainly think the themes here are worth exploring, but they would not be worth exploring if it was not for the strong emotional pull surrounding them. In what I found to be the most emotionally harrowing scene, we see Harry trying to tell his mother that he was doing better, he had met a girl, and was making good money. Sure he doesn't tell her that he has made his money selling drugs, but he really just wants her to be proud of him, to be happy, to not have to worry anymore. Of course she does not register it because of the weight loss pills she is on. Constantly in the film we see communication break down because of these addictions, but they are also always deliberately admirable in their intentions before the breakdown. Throughout the movie we watch the physical deterioration of these people, but we also see them become more and more isolated, more solitary, more lost. And underscoring it all is the feeling that, perhaps even without the drugs, all of it is inescapable.

Inescapable because the root of the addiction is not simply the drugs. The addiction is fueled by failure, an inability to find the American Dream. We see each character strive for independence, be able to provide, a desire to be liked and admired. The requiem, I believe, is very much for that dream. The cogs of our lives are oiled by this dream, it is packaged and sold, just as Tappy's motivational plan, through the media until all that we do, all that we think, is tied to living up to an idyllic life. For me, amid the willing humiliation, the self destruction, the delusion, this is where I find the greatest tragedy in the film. It's a culture to which we are addicted, one that we cannot simply remove from our lives or excise. These are lofty ideas to be tackled in a little over an hour and a half, and the movie handles them perfectly. Eleven years later Requiem for a Dream is just as poignant, just as frightening, just as insightful as I imagine it was during its initial release. Nothing short of a modern cinematic classic.

Though I had not seen the film before, I knew about the "Ass to ass" guy, but damn was that still a creepy part of the movie.

After coming off of last year's Oscars where David Fincher and Darren Aronofsky had stellar movies nominated for Best Picture (The Social Network and Black Swan respectively), I think it would be interesting to look at the two men side by side. Each seem to have their fair share of mistakes with The Curious Case of Benjamin Button and The Fountain, but also a number of successes. Plus that unique visual style, and especially a focus on the importance of the editing process. I make this comparison because just a year before this movie came out, Fincher released Fight Club, a film that (I feel less successfully, at least slightly) explores very similar ideas about American culture through characters who also deal with different types addiction and mental instability. Either way, it would make for a killer double feature.