The Power In Your Voice. Your Rough Touch. You Keeping Care Of Me, Keeping Watch 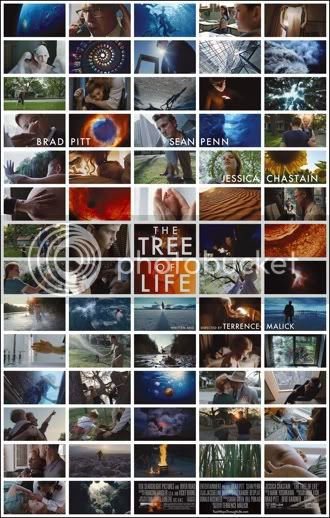 The Tree of Life (Malick, 2011)
"Where wast thou when I laid the foundations of the earth? declare, if thou hast understanding."

And with that brief verse from the Book of Job, Terrence Malick's latest - Palme d'Or winning - film The Tree of Life begins to lay the foundation for a thorough examination of humanity. Moments later we have the primary female voice, via trademark Malickian voice over similar to Badlands and Days of Heaven, posit a thesis that carries throughout the film: during life humans must either walk the path of nature or the path of grace. As we are thrown in to a small 1950's American town the movie makes it blatantly apparent that it casts a wide net, takes on a scope as large as life itself. It really is a beautiful juxtaposition to open the film with, starting as wide and expansive and then keeping those ideas contained to an incredibly specific, focused area. Malick presents the quintessential American life, 1950's USA white, middle class suburbia, and reaches for an understanding of the universal. And from there the film only grows.

Some would say that it may even grow a bit too much, as all of Malick's ideas from his lengthy, marked by a very brief output of films, career seemingly come to a head. Manifesting in a lengthy, meandering creation sequence, Malick crafts a beautifully shot (think of the nature scenes in The Thin Red Line on a much grander scale) sequence that begins to probe at the larger ideas tackled in the more traditional scenes to come. By setting this as decidedly anti-religious, the movie is able to demonstrate the transition from nature to grace. First seen in a dinosaur nearly crushing the head of a weaker, injured brother, it seemingly takes pity on his brethren. It's the first glimpse we see of compassion. We, collectively, may come from nature, but through that we create - or rather discover - grace. Ideas that are thousands of years in the making, hurtling toward the modern. In what is my favorite metaphor used in the film, this sequence culminates in a montage of stunning cosmic birthing images, from the asteroid hurtling toward the earth and penetrating the surface, wiping out life, but also being the sperm that makes it, that tosses Jack (Sean Penn, Hunter McCracken) out from the womb and in to the world to find his own path.

Most of the film from here focuses on the life of young Jack and his family, the O'Briens, as the boy and his brothers mature. McCracken turns in a wonderfully calm, yet intense, performance as the young boy, capable of more than matching up against harsh father (Brad Pitt) and loving mother (Jessica Chastain). For a creation story that was so anti-Biblical, the film makes up by appealing to a wide range of Bible type scenes. We see Jack confront struggles with his younger brother, his father's favored son, much the same way the Abel and other similar characters exist in Genesis. All the while we are presented with echoes of the creation sequences, similar rivers and bones that keeps the narrative disconnected, but constantly focused. As Jack grows he finds himself caught between nature and grace at their most extreme, and the most resonant moments of the film are found when he realizes that he does not completely belong to either. Jack yearns for his mother, but he cannot escape how connected he is to his father. The repetition of scenes, Jack plays keep away with a girl he likes in his class and later we see his father do the same with a waitress's tip, is a fantastic touch that underscores the boy's turmoil. Aside from the gorgeous cinematography, the way the narrative is assembled really struck me as effective. Malick is a master of creating a specific tone, but here he plays with vignettes that likely, as Matthew Rorie suggests in his excellent review, are adult Jack's fractured memories of his youth. Some more clear than others, all important to his current, seemingly hollow, adult life.

The Tree of Life is an incredibly complex film, as deep as it is sprawling. Wolfgang Iser is a well regarded literary critic who explores the idea of narrative gaps, portions of a text that exist with a reader in mind. The reader is needed to actively engage these parts and create links, synthesize information, and arrive at a reading that the text or author cannot explicit give to an unengaged, apathetic reader. Taking Iser's ideas and coupling them with Michel Foucault's idea of multiplicity, that a reader will be constantly receiving, processing, evaluating, revising, and reevaluating information to arrive at a number of multiple readings and interpretations that exist alongside each other at all times, I think the film reveals many of the smaller parts that contribute to the impressive whole. In the vignettes that make up the film, points of instant gratification are apparent, but beyond that Malick has created a film that can also be digested. It has only been a week since I've seen the film, but it has grown in my mind each day. With each thought new connections are made, no moments are ever wasted or disconnected. The asteroid is still throttling through the sky, whether the 1950's, prehistory, or thousands of years beyond this typing, these ideas drive the world. A film that is constructed in such a way, and can still tell a narrative, is really all I can ask for in a theater.

In my review of Super 8 I talked about how that film felt disconnected, and that same criticism can be levied against The Tree of Life, but I think the disconnect here is only on a superficial level. The themes transcend time, they have been here since the beginning, whether planned or otherwise. Malick's latest film is not for everyone, but on ambition alone it is admirable. The movie evokes ideas and emotions through its meticulous construction, marked by a freedom and noticeable precision. I do not know if it is possible to arrive at a definitive reading after watching the film just one time, I know I certainly did not. Either way, Malick delivers one of the most visceral, raw, emotional two and a half hours of cinema I have experienced in quite some time. In one of the more poetic, and astoundingly harrowing lines, Jack says, "Father. Mother. Always you wrestle inside me. Always you will." After one viewing I was satisfied with The Tree of Life; however, I am sure the film will be wrestling inside me for months, perhaps longer, to come. That is the marking of a truly great film.

I mentioned that this film would compare well to Super 8 in terms of construction, but both film also feature great performances from child actors as well. Youth movement!

Like last year's Palme d'Or winner, Uncle Boonmee Who Can Recall His Past Lives, Malick's film grapples with many of the same ideas in a setting that plays to the quintessential cultural experience of a nation. Boonmee is more concerned with time/space relations, but I think both would make for a great double feature.

Finally, I wrote a little under a year ago that Christopher Nolan's movie Inception was a film that may not have been done with me, but I was finished with it. I feel the opposite way about this movie. I also wrote in my The Social Network review that I would have liked to revisit it and actually go in depth with it, as it captures the 'modern' American experience while also remaining timeless in its themes, similar to Tree of Life. Oddly enough, there is a video floating around of David Fincher and Christopher Nolan discussing Malick's latest film.