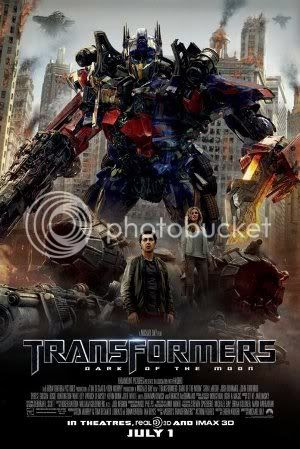 Transformers: Dark of the Moon (Bay, 2011)
I don't think I've ever really liked NASCAR. I know I enjoy elements of the sport, I know I am intrigued at pondering what it represents and where it finds its popularity, but as hard as I have tried I simply cannot discover the appeal on a large scale. As is the case with most sports the only real purpose is to assert dominance, and specifically in racing the appeal comes from watching the wanton destruction on the track when cars crash. Michael Bay's Transformers: Dark of the Moon - and the series in general - has always struck me as sort of similar to NASCAR. I understand it has a purpose, but I never really understood how this purpose is pragmatic. However, much like the motor sport I have attempted to love, perhaps even genuinely found flashes of excitement, I find myself ready to line up for each new entry that Bay attempts to pump out. So whether he is conscious of it or not (I don't think it matters much one way or the other), Bay has to be doing something right. Right?

That answer, I do not think, is very easy to find. Transformers 3 is pretty much a hodgepodge of plot devices and half boiled themes that are picked up and abandoned on a whim. Sam Witwicky, portrayed for the first time in three films as a delightfully unhinged Shia LaBeouf, has graduated college and is now alone in the world, unemployed and searching. Sure he has been awarded a presidential medal from Barrack Obama, and he is apparently sharing an apartment with new girlfriend Carly (Rosie Huntingon-Whiteley), but it's still a rough life. Rough because his Transformers pals are all out doing work for the government as they wait for the Decepticons to strike again. And they strike, and explosions occur, and they are in 3-D. Unlike the first and second films, Transformers 3 takes full advantage of the color spectrum, throwing away the muted browns and grays of Gears of War for every color on the amazing technicolor dream coat. Think Scott Pilgrim vs. The World, but slightly muted by the darkening effects that 3-D currently demands. And though I found the action sequences needlessly long, dull, and tedious, they are incredibly well constructed. Bay wisely leaves behind the quick, sporadic cuts of previous entries for slow motion at its most indulgent. But when it comes to a big, loud, dumb movie this is the biggest, the loudest, and the dumbest.

While the second half lags, I feel like the first half of the film is so completely off the rails crazy that it begins to not matter, mostly because it provides such a great juxtaposition between the meticulously constructed second half and the wild, ludicrous, indulgent former. How wild? So wild that we get a close up of Jerry Wang (Ken Jeong) tonguing a juice box before forcing Sam in to a urinal stall and hopping on top of him. How ludicrous? Enough that Sam's new boss Bruce Brazos (John Malkovich) sends a man around to throw out a woman's red coffee mug because they are on the yellow floor. And just how much more indulgent can this series get? Well the first sequence of the film, after the mix documentary footage and newly shot fantasy of John F. Kennedy and the first astronauts being motivated to get to the moon to secure a massive crashed spacecraft of course, is an upward angled camera that tracks the nearly exposed butt of Carly as she ascends the stairs of her apartment palace. And that's just the surface of about an hour and a half of non-stop insanity. Even LaBeouf shows flashes of Nic Cage at his finest, completely demented and insane. The script itself is poorly written, occasionally funny, but the way the actors all deliver their lines is a work of genius that generates an infectious, manic energy that only falters when the movie puts on its serious pants later for the final confrontation. But then it ends with a Linkin Park song after about two or three on the nose songs leading up to the last battle. Because why not?

I'm not really sure the serious pants are ever actually off though, and that's where I begin to have my problems with the film. Transformers 3 is a massive, flag waving spectacle that panders so much to the ideal image of America that, despite the hamming of the actors and the ridiculousness of the plot, is slightly terrifying. If the movie was to stand naked, we would probably see an oversexed alpha male, hopped up on steroids, holding a machine gun ready to fire at any outsider who is pompous enough to snicker at the "I Love Mom" tattoo right beneath the massive bald eagle on his bicep. There's also likely an empty pack of Enzite in the background somewhere too, I assume. The tattered stars and stripes waving triumphant, the blatant misogyny, a stupefying shallowness, Bill O'Reilly. All there, all assembled in glorious fashion waiting to be played with one more time. Transformers 3 becomes much less of an escape, and more of a reaffirmation. Terrifying, no doubt, but whether you find it genuinely excited or treat it with a resigned, cynical laugh, the movie is damn determined to make sure you have a good time regardless of how you choose to interact with the subtext.

Sometimes I feel in modern times we live in a world so incredibly steeped in irony that sometimes it becomes hard to tell whether or not there is a difference between enjoying something outright, and in deriving ironic pleasure. I feel this thought is completely apt when confronting Transformers: Dark of the Moon, and the likely inevitability of a fourth entry in the series. It doesn't matter if you love going to the track and getting wasted while the cars go around, or if you just enjoy the idea of the NASCAR spectacle. Genuine or ironic, it's still enjoying stimulation. Clocking in at over two and a half hours the movie is long, the action becomes tedious, and the plot is not only predictable, but it is held together by what is a generally weak script. Yet somehow Transformers 3 seemingly defies all the odds stacked against it, and makes what is likely the first 'popcorn movie' that actually demands to be seen in quite some time.

The call backs to Megan Fox's character are yet another example of Michael Bay working, at least slightly, on a vindictive meta-level. They provide for some funny moments between Sam and his parents, but the reference the two now incredibly less racist/stereotypical Transformers that Sam is housing make early on about her is such a wonderfully needless shot.

The supporting cast is pretty insane as well, specifically the John Turturro and Frances McDormand characters.

I don't know what type of architecture is used in Carly's work, so hopefully someone can let me know in the comments. I do know that it is one of the most new-age, smug, self important designed buildings I have ever seen though. Actually, that probably goes for Sam's place of employment as well, at least to a lesser extent. The people sit on exercise balls!

I think I only counted one direct Pink Floyd reference, but the phrase "dark side of the moon" had to be used at least ten times.