Keep Your Pekinese, Turkish Cigarettes, And Your Lighter That Looks Like A Gun 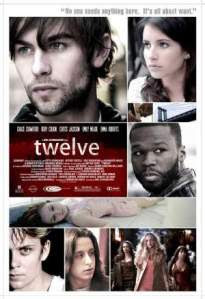 Many would say that Joel Schumacher is responsible for one of the worst films ever recorded: Batman and Robin. I have not seen this travesty, so aside from the film's reputation I have little else to form any sort of valid opinion. Similarly, I have incredibly limited exposure to Schumacher's filmography, so when I saw this film about two weeks ago all I took into Twelve dealt with the reputation that the film had built up since its premiere at Sundance. The film was ridiculed by the collective press so horribly at the event that Schumacher had all future screenings canceled and did not conduct any interviews at the festival after the film finished screening. So is the film as hollow and pretentious as the individuals on display in this world or is Schumacher's latest film an unfortunate victim of critical group think that, like the residents of this upper New York society, is simply cornered by expectation?

Through a sprawling cast Twelve explores the lives of mostly well to do New York residents, all tied back to Chace Crawford's White Mike. Mike is a drug dealer, hooking up with Lionel, played by 50 Cent, who drifts in and out of his clients' lives. The film makes this aspect subtly apparent, both in his name and the character's motivations, but like many of the film's subtleties Schumacher decides to have Kiefer Sutherland deliver voice overs explaining what White Mike, and many of the other characters, are thinking and explaining why they behave the way they do over the course of the movie. After the credits started playing I saw the film is based on a novel, so it seems that Schumacher attempts to blend meaningful prose into the film, but aside from some exceptions that do raise questions rather than explain much of the narration feels heavy handed. More perplexing is why it is there when the cast is pretty much fantastic all around, and the central narrative is as compelling as it is thematically deep. Crawford does a top notch job as White Mike, and all the supporters turn in solid to great performances. I saw the film because of my love for Emma Roberts' body of work, and she certainly did not disappoint - though I wish I could have relived that Lymelife chemistry between her and Rory Culkin; however, they shared the screen for all of one minute - but the real standout for me was probably Emily Meade as Jessica. She captures insecurity so perfectly and provides one of the most tragic storylines in the film.

And tragic is one Hell of a way to describe the film, or rather reasonably tragic. In many ways much of the film's tone reminded me of Remember Me, another underrated film from this year dealing with class stratification in New York City. Through the camera work Schumacher creates a tense and frantic sense that works incredibly well with the rest of the film and the ideas that are being explored. What I found to be one of the cornerstones of the film is the way that society creates a sense of confinement, and how each of the characters are not only confined by their world, but inadvertently defined by their world, and how meaningless these concerns become in the grander scheme. The film's climax is riveting and supports this claim, but because I imagine that many of the people reading this will not have seen the film yet I shall remain mum on the actual events. But leave some comments or shoot me an email because this film has quite a bit of depth to it that I would enjoy discussing at more depth.

While I did not love Twelve I certainly that that the film is visually interesting enough and is packed with more than enough performances to justify its existence, but the real strength of the film is found in the harsh examination of adolescence. Plenty of films explore the conformist nature of American society and the shallow caricatures of affluent members of society, but the teen angst and melodrama on display in Twelve explores these ideas in such a refreshing and sincere manner that the film stands out from other similar throw away films. Schumacher's latest has its share of flaws, but the film aspires to so much and delivers in just enough areas to win over my shallow tormented soul.

I'd look forward to hearing any thoughts on the film, even general impressions or interests. Do you care about this film at all or is it just this year's Spread?

Netflix Rating: ***/*****
Rich
Comments are welcome and, for anyone with a literary mind, I encourage checking out my poetry blogfilled with all original works for your reading pleasure. Or if video games are more your thing, I have a blog dedicated to all gaming news, reviews, and opinions.