Oblivion's Been Knocking Since I Gave It My Address 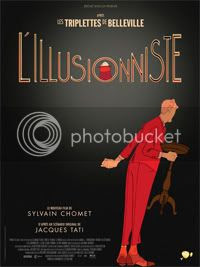 The previous year was an incredibly strong year for animated films the world over. Japan delivered the strongest showing with Summer Wars, Ireland brought the fantastic The Secret of Kells, and France yielded the joyous display of absurdity known as A Town Called Panic. And once again we find ourselves in France for Sylvain Chomet's adaptation of Jaques Tati's script for The Illusionist. While Chomet plays his comedy in a broad sense, likely a departure from Tati's signature style, the pull of the film is located in its ability to balance strong emotional scenes with the tension of an ever changing world.

The Illusionist magnificently creates a picture of a world in flux, leaving the vaudeville spectrum behind in exchange for a more modern entertainment. Record players are replaced by jukeboxes, stages are replaced with movie theaters, and magicians are replaced with the Britoons, a cartoonish version of The Beatles. These art forms are lost, television is invading homes, the world is changing and our central figure, the titular Illusionist, searches for a place where he can still survive, if not thrive. Chomet enhances this theme by taking advantage of traditional animation, an art form that itself has seemingly taken its final breath, to mirror the themes are the center of the narrative. The world and the characters are perfectly captured by the animators as Chomet's vision drips off the screen. Each frame is so lovingly rendered, each movement so carefully planned an executed, all advancing that central idea, all setting a beautifully somber tone.

Chomet sets this tone by keeping a focus on a fairly standard relationship that, for much of the film, straddles the line between endearing and creepy. By placing two characters alongside each other for much of the film, the old illusionist and the young Alice, Chomet is able to add a human element that keeps the film from solely existing as a vehicle to enhance a message. The two are given their own arcs that are both connected by a sense of loss and concealment, a desire to hold on, but the truth that the world cannot stand still.

As the film approaches its conclusion a sense of sadness sweeps over the screen, one that would not be possible without the choice to keep the film mostly silent. We do not have subtitles, we have people talking, but for the most part what they say is irrelevant. This forces the viewer to pay attention to each movement, to each interaction, it makes the animators do most of the heavy lifting, and through this attention we can begin seeing these characters not as cartoons, but as people. And from there the film rises from a very good examination of entertainment to a great, emotionally charged picture of human growth. Chomet's latest film is not flawless, but the film works on nearly every technical and thematic level to make for one of the most fully realized pictures of 2010, animated or otherwise.