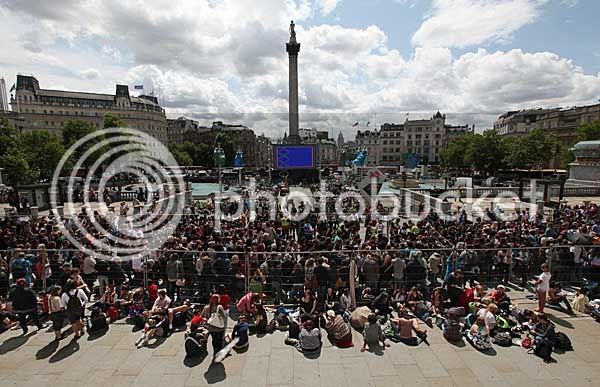 You see that picture above? That's a photograph from London of thousands of people camping out for the London premiere of Harry Potter and the Deathly Hallows Part 2. It premiered over there on July 7th (today!). I couldn't be there, so I am going to be doing the next best thing. If there's one thing I love more than Harry Potter, it's big, dumb elaborate stunts that test the very limits of my psyche. There is, perhaps, something incredibly appealing about the art of self destruction (this should be the title of the failed novel I attempt to write). It is with that mindset that I have decided to undertake what is, largely, an incredibly trying task. I am going to be watching all seven of the Harry Potter films back to back to back to back to back to back to back as a way to completely send one of my favorite series of all time out with a bang.

I should be giving credit to Screened.com's Matthew Rorie for undertaking this task last year leading up to the release of Harry Potter and the Deathly Hallows Part One. Ever since following along with his undertaking of the task I have considered doing it myself. And honestly, what better time is there than now?

At first the plan was to do this leading up to a midnight premiere of Harry Potter and the Deathly Hallows Part Two, but I am actually leaving for Chicago on the 14th so that I can attend this year's Pitchfork Music Festival from the 15th-17th. But it turns out that is actually not so bad after all! Why? Simple, because now I have a chance to see if the 3-D is any good, so maybe I will even go to a screening with those glasses. And if it's not supposed to be a great up-conversion, as I suspect to be the case, I won't be forced in to seeing it just because that is all the theater is offering at midnight.

The Harry Potter series has been, for years upon years, one that I have loved. It seems redundant to call the books magical, but for me that's exactly what they have been, and will continue to be far in to the future. These are characters that I went through adolescence with, characters for whom I have an incredible amount of adoration, and most importantly a world that I have escaped to on countless occasions. The wizarding world, I feel even more than the books, is something special. It has given me so many personal memories, both high and low, in the way that few works of fictions have ever been able to sustain for such a long period of time. I remember blowing through books, waiting for releases, even reading websites completely devoted to the Harry Potter series. I regret not being able to go to the final midnight release and close off the tangible end to the series in grandiose fashion, but I know the world will always be with me and even by pushing off this undertaking a few days the world will never truly end. There are plenty of new memories to still be made.

I considered streaming the event, but I don't think that my computer actually works well enough to allow me to do that. So what I have decided to do is live tweet the entire event. If you don't follow me already (seriously? It's linked at the bottom of every post!), you can click here and prepare for the Harry Potter Day of Reckoning Live Tweet Spectavaganza! So how exactly with his work? That is, mostly, easy!

While exact times have not yet been released for the days after next Friday at my theater, I do tentatively plan to run through all of the films starting early Wednesday morning and running all the way through until the closest showtime of HP7P2. As the date draws closer I am going to be able to give definitive times, including the time of said showing. Until then though, here's my tentative schedule with rough time estimates:

Obviously there will be bathroom breaks, food breaks, and the time to drive from from my home to the theater, whenever that screening actually happens. And, yeah, I know each film is not exactly two hours long. These are just rough estimates. My guess is that I will end up seeing HP7P2 somewhere around 8 pm EST.

So, friends, what do you think about this undertaking? Crazy? Incredible? Somewhere in the middle? Let me know below in comments, as I am sure I will need all the moral support that I can get! Also, be sure to tell your friends about this, share it with all the Harry Potter fans you know! You will all have probably seen the newest film by then, so why not re-live all those magical feelings vicariously through my viewings. I'm toying around with the idea of doing contests or giveaways during the live tweeting as well, depending on interest, so let me know if you plan on following along and what you would like to see happen during the event!

Look for more information in the coming weeks both here and on my twitter. Until then, mischief managed!