I've Been Wandering The Desert For A Thousand Days 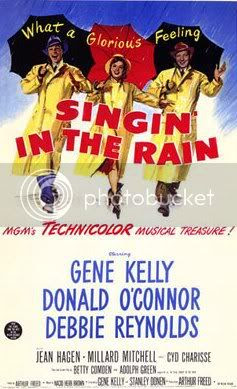 Singin' in the Rain (Donen and Kelly, 1952)
Over the course of history the affection built up for certain ‘genre films’ has proven to be an incredibly fascinating phenomenon. In many cases the perceived notions are incredibly warranted, capably withstanding the test of time while still retaining the magic that originally marked a film as great. Dr. Strangelove is the epitome of the black comedy, Men in Black defines the summer popcorn movie, and Toy Story captures all the strengths of the ‘family film.’ All of these films take genre convention and present plots that are unique and engaging while also delivering memorable characters and experiences for the viewer to make the films memorable; however, for every Annie Hall there is a Sideways, a film that does enough to make it look unique while doing little to actually elevate the genre, yet it still ends up being heralded as a triumph. This confusion of style for quality brings us perfectly to one of the greatest offenders, Singin’ in the Rain.

The musical is, by nature, a very problematic genre. Each musical can relate to any sort of topic, at any point in history, and take place anywhere in the universe. The only thing a musical needs to involve is, well, some sort of music. Still, most of the famous musicals do tend to have some common areas such as romances used as driving forces in the plot and more theatrical aspects in the script, which makes sense given the transition from theatre to screen that musicals made in the past. So why, in a genre that allows for literally limitless possibilities, is the perceived ‘crown jewel’ an overly generic and thoroughly underwhelming conventional film?

The answer seems simple: people enjoy feel good, escapist films. The fact that Singin’ in the Rain works on a quasi-meta level, acting as a film about films, only further enhances the perception that the film is some kind of revolutionary work of genius. However, the driving plot line through much of the film, the complications of making a talkie with silent film stars, is ultimately tossed aside for a lifeless romance between Gene Kelly’s Don Lockwood and Debbie Reynolds’s Kathy Selden. The interesting meta commentary becomes a backdrop to what is nothing more than a film focusing on a romance plot that has been used in countless musicals before and numerous musicals after. The introduction of Jean Hagen’s Lina Lamont adds a nice bit of drama to the film, but hardly enough to cancel out the film’s overly predictive narrative and a love triangle aspect which is as old as drama itself.

Perhaps this would be forgivable if the music did anything new, but most of the songs, the title track aside, are completely forgettable. The film makes an attempt to redeem itself by becoming the over the top theatrical musicals it mocks with the last grandiose musical number, potentially a sequence that could have made up for all the predictable plot points previously in the film, but then the final sequence, featuring a close up of a teary-eyed Reynolds, cements the over used clichés the film has made extensive use of before, seemingly for no reason aside from the conventional idea of how musicals should exist.

Now is convention always bad? Certainly not, plenty of films exist without subverting expectations or breaking genre convention. Even the art of the escapist film is one that I cannot bring myself to write off entirely, but in the case of Singin’ in the Rain the film does little worth noting to make it some grand, escapist affair. Once one looks beyond the half-baked meta aspects of the film, Singin’ in the Rain is hardly different from more openly trashed musicals like Grease or, dare I say it, High School Musical.