Just as I have been recovering from my trip to this year's Pitchfork Music Festival, I have also had to come to terms with the fact that my early predictions for last week's box office results were disastrously off base. Well, at least my prediction for exactly how much Harry Potter and the Deathly Hallows Part Two was going to make, because I was actually pretty much spot on in my prediction of how much Disney's latest offering, Winnie the Pooh, would take in on the weekend. So with yet another week and yet another potential blockbuster releasing it's about time that I really start to buckle down and get things right this time. So pull on that helmet, pick up that, shield, and wave that damn flag because I'm dedicating this week's incredible round of predictions to the glorious nation of Patriotstonia! For the CGI! 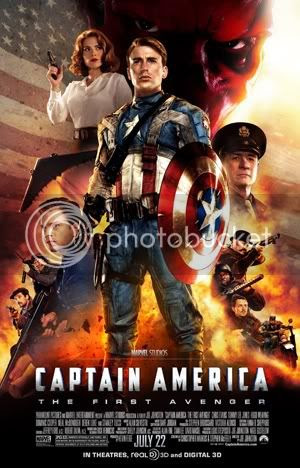 Captain America: The First Avenger
Hey man, do you like big summer movies? Well yeah, who doesn't like having fun. Well what about comic book movies? In this day it seems like an affirmative answer is a prerequisite to liking the former. How about America, you like America don't you? Michael Bay knows you do, didn't you see Transformers? So why not combine all three of these for another super hero movie? That's the logic behind Captain America: The First Avenger anyway, well that and to be another merchandise selling machine that doubles as an advertisement for next year's Avengers movie. But Thor proved earlier in the year that these phoned in franchise films can not only make money, but be entertaining enough in the process.

Actually, this movie seems situated somewhere between the more pulpy world of X-Men: First Class and Thor. Since the audience for this film seems to be a bit over-saturated right now I do not see the latest Marvel film doing Thor numbers, a movie that kicked off the summer by opening around $63M, and Captain America is not as hot a property as the X-Men brand, which opened around $55M, but it is July and this is a comic book movie, so it will make some money. However, I don't see this one even doing the numbers of latest DC superhero bomb The Green Lantern, which opened similar to X-Men. But America is a fighter's nation, we strike back, baby! These colors don't run from box office failure! 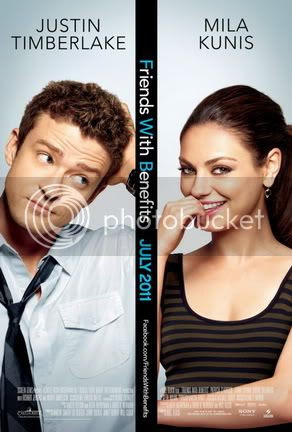 Friends With Benefits
And now we have the movie that people inclined to take the easy road in life have been comparing to No Strings Attached since before either were even released! Will Gluck's latest rom-com offering, Friends With Benefits, situates itself as a raunchy sex comedy with a heart of gold, which definitely sounds like other movies that have had financial success this year. However, given Gluck's former filmography, boasting the painfully uneven Fired Up! - totally worth it for the scenes with Dr. Rick though - and the shockingly mediocre Easy A, there is little reason to expect anything more than a mixed bag of laughs containing a generic script from this Justin Timberlake/Mila Kunis love fest. If ever a film promised mediocrity, Friends With Benefits is likely the movie most willing to make that promise.

Comparing this one to Gluck's older films seems worthwhile at first, especially since trailers have been touting the Easy A - a $17M opening at the end of summer - connection, but this movie is also carrying an R rating. Usually that mark, perhaps fitting to call it a scarlet letter even, would cause me to be a bit hesitant, but that has not deterred movies like Horrible Bosses, Bridesmaids, and Bad Teacher from opening to about $28M, $26M, and $31M respectively. And though the Timberlake and Kunis trains have been rolling hot lately, I don't see this one doing those types of numbers because the market is still showing two of those movies and remains pretty crowded. Also in my unfounded optimistic side perhaps some people know not to be fooled by actors and to simply look at a director to predict the quality of a movie. Though that seems highly unlikely. Never forget, America, never forget!

For me the most intriguing question on the weekend is whether or not Captain America has enough to hold off Harry Potter in its second week. Marvel has lately been able to hold the number one spot for their new movies, and they definitely need to build that Avengers hype as soon as possible because I'm sure that Disney is likely still licking its wounds from the thrashing that WB and Potter dealt Pooh last week, and both are poised to clash again next summer when Joss Whedon's Avengers goes up against Christopher Nolan's newest Batman movie. Man, that's the type of drama that sparked something like the Civil War! Which I guess makes sense, because those who have not seen Song of the South seem to think that Disney supports racism, making them the ideal Confederacy. Patriotism!

Now I can be bold and predict that come Monday morning, here is how the Top Five might look:

So, who do you see coming out on top this weekend: The Boy Who Lived or The Boy Who Was Genetically Engineered To Love America And Kill Foreigners?