Wish There Was Something Real In This World Full Of You 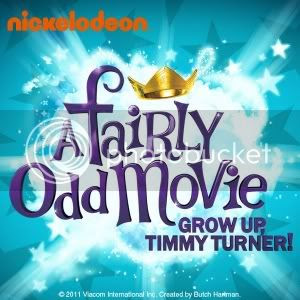 A Fairly Odd Movie: Grow Up, Timmy Turner (Shortened Version) (Holland, 2011)
Earlier in this year J.J. Abram's latest film Super 8 made unapologetic plays toward the nostalgia of audiences the world over by hoping to tap in to childhood memories of beloved Steven Spielberg classics. With the latest made for TV Nickelodeon movie, A Fairly Odd Movie: Grow Up, Timmy Turner!, we have appeal to a nostalgia that I think is likely still there for a large section of the audience, at least it's there for me, while still being able to draw in recent viewers who have taken a liking to the cartoon series that spawned the feature length live action adaptation. I still remember watching the very first episode of The Fairly Odd Parents, actually the pilot on that cartoon collection thing that Nick had which was similar to Cartoon Network's What A Cartoon, and finding, alongside a great block of animated programing that Nickelodeon was pushing out at the time, another show that I became instantly addicted to for a good deal of time. But all too many times with these types of movies making the transition from animated series to full on film is even more difficult than turning a television show into a movie in the same format, so despite being interested in the cast I was even more excited to see how the movie handled this transition.

Oddly, perhaps even fairly oddly, the movie handles it by channeling much of the same comedic styling that the television show employs while hoping that they stick in the 'real' world context. For the most part this movie follows the same plot of any episode of the television series, except this takes place in the future. Timmy Turner, played well enough by the talented Drake Bell, is now twenty three, but still lives at home - there's nothing wrong with this, America! - with his parents (Nancy Sullivan and Daran Norris), still attends Mr. Crocker's (David Lewis) fifth grade class, and still makes absurd wishes that Cosmo and Wanda grant. Mr. Crocker, in his endless quest to prove that Timmy's fairy god parents are real, teams up with a big businessman who is attempting to mind Dimsdale of its untapped oil. Tootie, in what is the film's best emotional performance put on by the always stunning Daniella Monet, is now super gorgeous, all about protecting the town, and still all about Timmy Turner. The catch is that Timmy, able to grow up as a literal man-boy, will lose Cosmo and Wanda if he either moves away from home, grows up, or falls in love. So he fights budding romantic feelings in order to preserve his fairies. Conceptually this plot makes for a good story, and somewhere in this version of the film is a great plot waiting to get out.

I say that, and I stipulate that I watch the edited version in this post's title, because I have seen two different cuts of this movie. And this is where the review starts to get slightly dicey. The film premiered on July 9th, with a ninety minute time slot dedicated to showing the movie. I only watched about forty five minutes of this version. The following day it was re-ran on Nickelodeon in a sixty minute chunk, of which I watched the film in its entirety. Needless to say, I noticed differences. What is excised is not major, basically this shorter version cuts out a few unfunny gags involving Timmy's childhood friends Chester (Chris Anderson) and A.J. (Jesse Reid) grown up, former babysitter Vicky (Devon Weigel) being mean, and super fairy Jorgen Von Strangle (Mark Gibbon) attempting to shoot Cupid's arrows at Timmy to make him fall in love with anything before he misses and his plan goes horribly awry. What these scenes do that is important is not build humor, they create a sense of depth to the world that is important in maintaining the film's greatest strength: its exploration of growth.

At the crux of this film is the idea of growing up, but the way that it explores this idea is much more complex than that simplistic theme indicates. Because the film uses many of the same story telling techniques of the cartoon, even Mr. Crocker has a flipping out montage when he says "Fairy God Parents", just about all of the adults that we see in this world are complete exaggerations and, for the most part, jokes. The scenes with Chester and A.J., at least the ones that I saw in the original cut, are especially resonant because we are presented with Timmy's equals all grown up and, for the most part, living a grown up life that affords them the chance to scoff at their friend's misspent life. The irony, of course, is that they themselves have not really changed at all. They just have jobs...and cars instead of bikes. The movie, while stressing the emotional benefits of maturity, seems to actively condemn the actual act of growing up. These people are always trapped. I saw flashes of this type of nihilistic bite, perhaps even the cartoon at its prime, in that first version. You need teeth to bite, and the shorter version, while entertaining enough, seemed like the dentist decided to yank out everything except the molars.

There is a world where a great version of the the Nickelodeon movie Good Burger exists, and after seeing those first forty five minutes of the actual cut I know that there is, at the very least, a good cut of A Fairly Odd Movie: Grow Up, Timmy Turner! roaming around in the wild somewhere. Sadly, this trimmed down version, despite some moments that do capture the fun of the series, and being lined with at least one stunning performance, just does not feel like it has enough breathing room to be anything more than a diversion. The scope is simply too limited, especially when they set up the world to be so well encompassing. No evil Vicky, no forgotten friendships, no view in to the fairy world, not even a fully developed villain. If you're going to remove the meat, then the marrow better be worth the effort. At some point in the future I hope to watch the actual version of this movie, but for now I must reflect on what I saw, and most of the time I felt that this version could have used some of Cosmo and Wanda's magic that I saw the night before.

I do intend on watching the full movie when it's out on DVD, and I'll write up a separate review if it is as different as that first viewing implied. And, honestly, even in its shortened cut I can see the target audience enjoying this movie because it is fun to watch these characters in action, but the way it approaches the themes it grasps at was so unconventional that I'm disappointed I saw what is likely a trimmed down, barely serviceable, version. Either way, Daniella Monet needs to be in more movies now!