CEO, You Don't Have To See ID 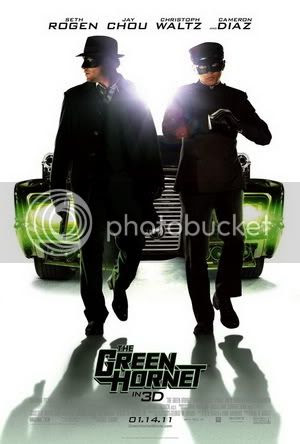 The Green Hornet (Gondry, 2011)
I had a chance to catch an advanced 3-D screening of Michel Gondry's latest film, The Green Hornet, last night, so I am taking a bit of a break from my 2010 coverage to venture in to the present. Never early enough to get a jump on the current year, especially when that jump involves the director of Eternal Sunshine of the Spotless Mind, Be Kind Rewind, and others. Not to mention a script from the men who penned Superbad, an Asian pop star taking up acting, and one of the more compelling comedians working today. So with all this talent involved this cannot possibly go wrong, right?

With The Green Hornet we have a film that is about identity. Academy Award Winner Christoph Waltz, filling the obligatory villain role that every superhero film needs to have to keep the plot moving, attempts to find a more edgy persona at the expense of the aspects that made him a crime lord to begin with, while Seth Rogen's Britt seemingly has little identity at the onset of the film and attempts to find the human aspects of his personality under the guise of the titular quasi-hero. Unfortunately, the film struggles with its own identity, indecisive as to whether or not it wants to be an action film or a comedy. Now Gondry has experience blending genre in the past, and there are some moments where the script, the visuals, and the actors fire on all cylinders, having the genres spill over and mix brilliantly.

The film does have some really well directed action sequences, both fights and car chases. The comedy tends to hit most of the time as well, thanks in no small part to Rogen's presence on screen. However, when the film tries to blend the two, most notably in a fight sequence between Britt and Kato, his sidekick played by Jay Chou, the laughs slowly taper off and the film becomes uncomfortable. For me Gondry has always had a unique style, but he lives and dies by the script. Eternal Sunshine has a mostly enjoyable script, and Gondry's visuals add to the script, making for a pretty alright film, while here we have a fairly generic script, in terms of the story being told not the actual dialogue, that is enhanced by Gondry's visuals. Even the up-converted 3-D works well to establish depth that highlights the rifts between the characters. However, this technical prowess and the mostly enjoyable writing and performances cannot save what is, essentially, a fairly sloppily told origin story.

When the film does ask questions though, such as the struggles for identity and the interesting parallels that exist between Waltz, playing an enjoyable spin on Hans Landa-lite, and Rogen, but because their two worlds are so disconnected the tension between the two is difficult to convey when the showdown eventually occurs. The film attempts to link all the story aspects together in a hokey, crazy comic book absurd logic of yesteryear's films (as opposed to the more serious ones in theaters today), and while that portion of the film is humorous and does work, many of these more over the top aspects found in the film's conclusion seem to go against the serious elements established early on. The film does such a nice job of making death matter, establishing and following up with the reality and risk of each situation, but then these elements are played more for laughs at the end. The laughs work, they just do not make much sense.

Ultimately, The Green Hornet is not really the squandered potential that was apparent in the overall feeling of Be Kind, Rewind, but while that film had an interesting premise that had writing which did not play well to the potential of the concept, this film falls prey to the opposite, leaving the writing and interaction in limbo because of the generic origin tale. Still, The Green Hornet is an interesting and mostly enjoyable film to watch, it just fails to follow through some of the more ambitious aspects of the script.